The Samsung C32HG70 offers an exceptionally good HDR image quality for the price. However, the display is held back by its slow response time speed due to the lack of proper overdrive implementation. It’s a great display for slow-paced games whereas in FPS games, you will have to use 1ms MPRT which means you have to sacrifice FreeSync and HDR.

The Samsung C32HG70 is a 1440p 144Hz curved gaming monitor with quantum dots, AMD FreeSync 2, and DisplayHDR 600 certification. Let’s see if its premium features are worth the extra cost over the standard 1440p 144Hz VA displays.

Further, the display has wide 178-degree viewing angles and an excellent peak brightness of 350-nits which will jump up to 600-nits for HDR-compatible content. Such high peak luminance and wide color gamut also earned the Samsung CHG70 monitors VESA’s DisplayHDR 600 certification.

Additionally, the Samsung C32HG70 monitor has an 8-zone edge-lit local dimming implementation. These eight zones help dim the parts of the screen that need to be darker thus increasing the effective contrast ratio of 3,000:1.

Since there are only eight dimming zones, the contrast ratio won’t be drastically increased; the more expensive HDR models such as the ASUS PG27UQ have a 384-zone full-array local dimming system which allows them to achieve a peak brightness of 1,000-nits and a contrast ratio of 20,000.

On the 32″ CHG70 gaming monitor, Quad HD resolution of 2560×1440 pixels results in a decent pixel density of roughly 93 PPI (Pixels Per Inch) which is equivalent to 1080p on 24″ screens in terms of screen space and detail clarity, you just get a much bigger screen.

The 27″ model has a higher pixel-per-inch ratio of 108.79 PPI which provides more screen real estate and clearer details.

Unfortunately, the performance of the Samsung C32HG70 144Hz gaming monitor is not as good as its image quality, mainly due to its response time speed.

The 1ms MPRT speed is achieved via backlight strobing which you can enable by setting the ‘Response Time’ setting in the OSD (On-Screen Display) menu to ‘Faster’ or ‘Fastest’.

This causes the screen to insert black frames between the regular frames in order to reduce the perceived trailing and motion blur of fast-moving objects.

However, you cannot use this technology at the same time as HDR nor FreeSync. Moreover, it reduces the monitor’s maximum brightness while it’s active, and it can only work at the following fixed refresh rates: 100Hz, 120Hz, or 144Hz.

While this is typical for all monitors with backlight strobing, the problem is that the Samsung C32HG70 has no other Response Time options other than ‘Standard’. So, there are no overdrive settings.

Due to this, there’s noticeable ghosting and smearing in fast-paced games unless 1ms MPRT is activated.

The Samsung C32HG70 input lag performance is very good though with only ~6ms of imperceptible delay when the Low Input Lag mode is enabled (on by default).

Lastly, note that the Samsung C32HG70 uses PWM (Pulse-Width Modulation) to regulate brightness below 100% luminance which introduces screen flicker. The flickering isn’t noticeable, but if you are sensitive to it, you may experience headaches and eye strain. The 27″ model doesn’t use this method, and it’s completely flicker-free. 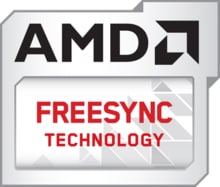 The Samsung C32HG70 HDR monitor supports AMD FreeSync 2 which provides a variable refresh rate (VRR) when using a compatible graphics card which removes all screen tearing and stuttering as long as your FPS (Frames Per Second) rate is within the dynamic refresh rate range.

The Samsung C32HG70 VRR range amounts to 48-144Hz/FPS (with the firmware update). FreeSync also works without any issues with compatible NVIDIA GPUs.

Further, FreeSync 2 ensures minimal input lag penalty when gaming with HDR enabled. It also allows HDR and FreeSync to run simultaneously and ensures LFC (Low Framerate Compensation) which makes the display double its refresh rate when the frame rate drops below 48FPS (for instance, 47FPS -> 94Hz) for a smoother performance.

Moving on, pressing the OSD joystick placed at the back of the monitor opens up the menu.

Next to the joystick, you can find three additional buttons which can be used as shortcuts for applying the customizable gaming presets. Moving the joystick up and down adjusts the brightness while moving it to the left and right changes the volume.

Navigation through the menu is easy and intuitive with plenty of useful features available including ‘Black Equalizer’ which alters the gamma curve for better visibility in dark parts of games and ‘Eye Saver Mode’ for a more comfortable viewing experience at night.

You can also manually enable/disable the local dimming depending on which option you prefer. The monitor, however, lacks PiP (Picture in Picture) and PbP (Picture by Picture).

Lastly, the Samsung CHG70 monitors feature the ‘Arena Lighting’ technology with LEDs placed at the back of the monitor for ambient lighting. 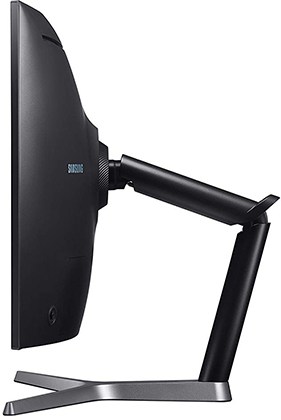 It has a light matte anti-glare screen coating which eliminates reflections and a 1800R screen curvature which makes the viewing experience more immersive.

Connectivity options are abundant and include DisplayPort 1.4, two HDMI 2.0b ports, a dual-USB 3.0 hub (one upstream and two downstream ports – one with fast-charging), a headphones jack, and a microphone jack.

So, you are paying $150-$250 for HDR which we don’t think is worth it considering that first of all, not all that many games support HDR in the first place and secondly, the response time of the CHG70 displays is actually worse than that of similar yet cheaper displays.

If the majority of games you play do support HDR, then the CHG70 is worth considering.

The Samsung CHG70 FreeSync 2 HDR displays were promising gaming monitors but their response time performance is simply not up to snuff, especially considering the price tags.

On balance, the amount of ghosting will be tolerable to most users (although still noticeable) up to 100Hz/FPS. So, if you mostly play slow-paced RTS, RPG, etc video games, you will be able to enjoy stunning visuals and decent performance thanks to HDR and FreeSync.

In fast-paced games, you will have to rely on backlight strobing which has its downsides. Either way, you are paying a full price for only partial usability, so we recommend considering another gaming monitor at this price range.