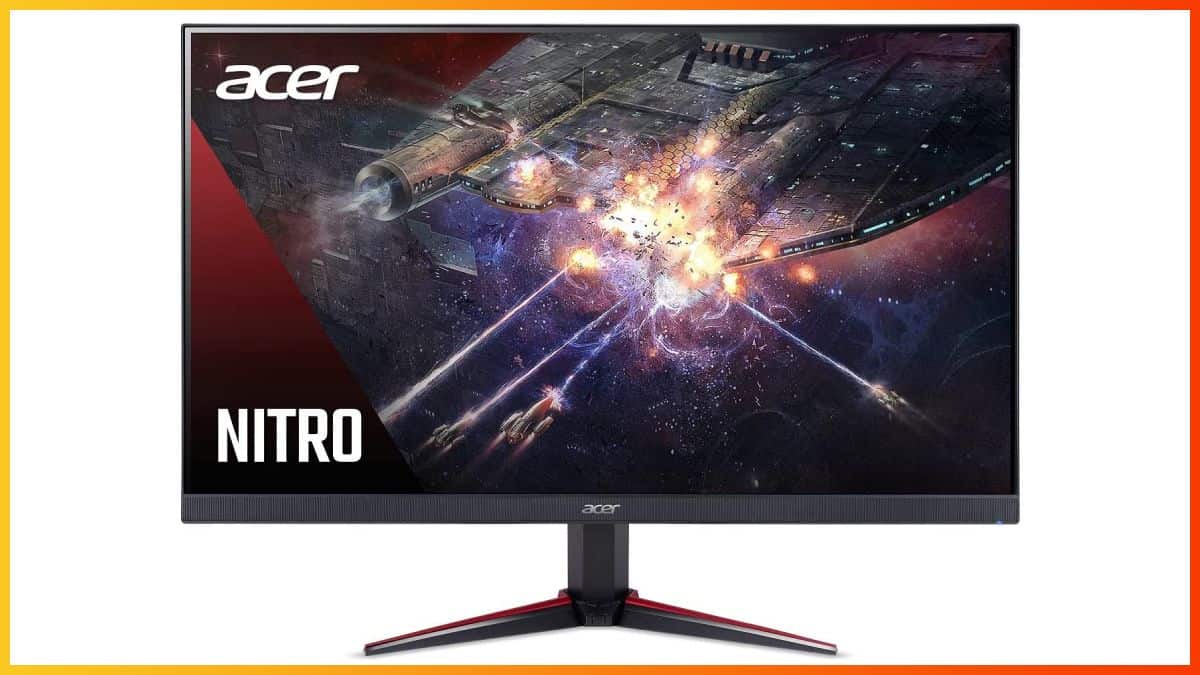 The Acer VG240YP is a good gaming monitor for the price. It’s perfect for mixed use that includes content creation, fast-paced gaming and other multimedia use. When it comes to competitive gaming, it’s not as fast as the TN alternatives, but for casual gamers, it’s more than quick enough. Plus, you get gorgeous colors and wide viewing angles.

The Acer VG240YP is the first 1080p 144Hz IPS gaming monitor to be available as a 24″ variant. Previously, only 27″ models were available, which many users avoided due to the lower pixel density.

All in all, the Acer VG240Y P is the perfect budget monitor for mixed-use, including fast-paced gaming, entry-level content creation and everything in-between.

Based on an IGZO-TFT IPS panel by PANDA, the Acer VG240YP delivers wide 178° viewing angles as well as accurate and vibrant colors covering the standard sRGB color space and 8-bit color depth via dithering (6-bit + FRC).

Now, other panel-related specifications include a static contrast ratio of 1,000:1 and a 250-nit peak brightness, which is standard for an IPS display at this price range.

Pay attention to this: the maximum luminance of 250-nits may seem low on paper, but the screen can get more than bright enough. Under normal viewing conditions, you’ll want to decrease the brightness level from 100 in the display’s settings menu.

1080p resolution results in a pixel-per-inch ratio of 92.56 PPI on the 23.8″ viewable screen of the Acer VG240YP, meaning that you’ll have a fine amount of screen real estate available, as well as fairly sharp and clear details.

As if that’s not enough, 1080p will allow you to easily reach high frame rates even in more demanding games if you have a decent graphics card.

The Acer VG240YP monitor also supports HDR (High Dynamic Range). However, it’s software-emulated only, so you can essentially ignore it.

As expected from an IPS panel, some IPS glow is present, but it’s manageable. The amount of IPS glow varies between individual units of the monitor. Learn more about IPS glow.

Moving on, the Acer VG240YP has an excellent input lag performance with only ~4ms of imperceptible delay at 144Hz.

Acer doesn’t specify the GtG (gray to gray pixel transition) response time speed of the monitor, only the MPRT (Moving Picture Response Time) measure of 1ms, which is achieved via backlight strobing.

In fact, in order to get the specified 1ms, you’ll need to enable Visual Response Boost (VRB) in the monitor’s OSD (On-Screen Display) menu. This feature strobes the backlight to reduce the perceived trailing of fast-moving objects.

However, VRB also reduces the monitor’s maximum brightness, and since the Acer VG240YP display has a peak luminance of 250-nits, the image will be quite dim when using this feature.

Additionally, VRB cannot be active at the same time as FreeSync or HDR. So, most users won’t find this feature useful.

Luckily, the regular GtG pixel response speed of the monitor is pretty good.

It’s not as fast as that of the equally priced TN gaming models, which have a 1ms GtG speed, but it’s significantly faster than what you get with VA panels at this price range.

Some motion blur is noticeable in fast-paced games, but you won’t get any black smearing associated with similarly priced VA panels.

The Acer Nitro VG240YP supports AMD FreeSync with a 48-144Hz variable refresh rate (VRR) range over both HDMI and DisplayPort.

What does this mean for you?

FreeSync makes the monitor’s refresh rate change dynamically according to GPU’s frame rates within the VRR range, which eliminates screen tearing and stuttering with virtually no input lag penalty (~1ms).

While NVIDIA does not certify it as G-SYNC compatible, FreeSync works on the Acer VG240YP with compatible NVIDIA cards as well, but you will need to get a DisplayPort cable as one is not provided with the monitor.

That’s not all, when FreeSync is enabled, you won’t be able to use the Extreme response time overdrive option on this monitor, which is a common issue for some of Acer’s gaming monitors.

Since the Extreme option introduces pixel overshoot i.e., inverse ghosting, this is not a big problem. Just use the Normal overdrive option, and there won’t be any issues.

Navigation through the OSD menu is quick and easy thanks to the joystick, which is placed at the back of the screen at the right side.

The design of the monitor has a tilt-only stand (-5°/20°), but it’s VESA mount compatible and has very thin bezels. Connectivity options include two HDMI 2.0 ports and a single DisplayPort 1.2 input.

For that price, we recommend the AOC 24G2 instead. It has a better overdrive implementation, a wider color gamut and a more ergonomic stand.

While the VG240YP is an overall good gaming monitor, there are better alternatives for the money.