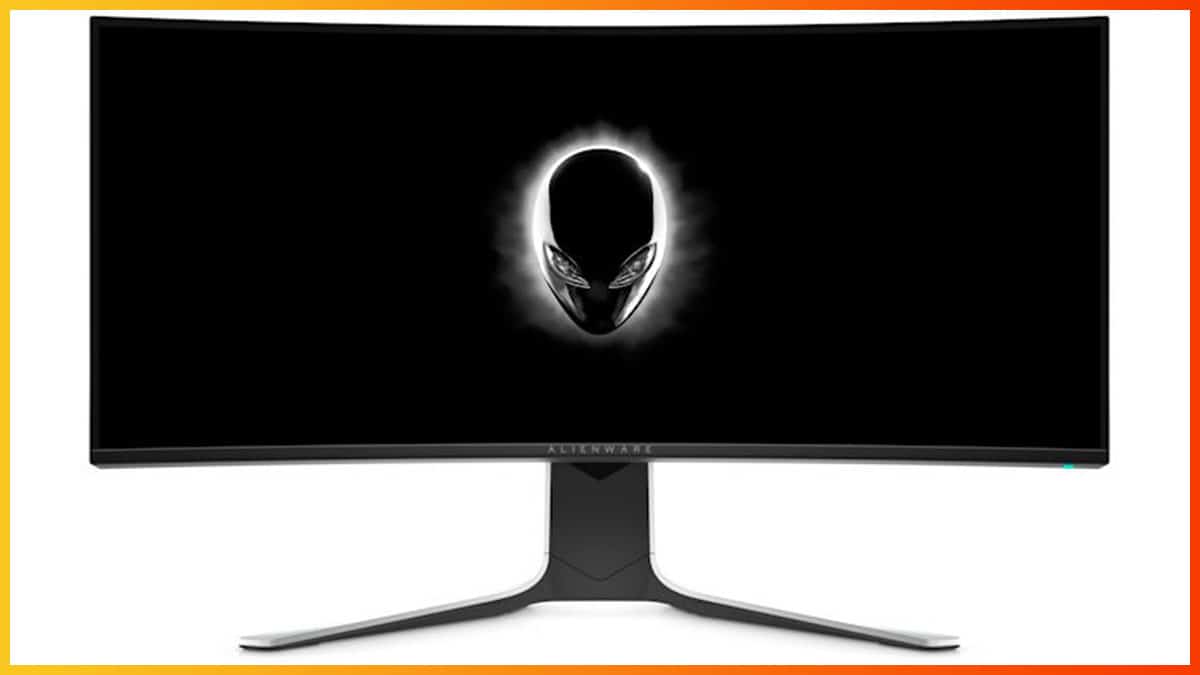 The Dell Alienware AW3821DW delivers both an immersive and responsive gaming experience thanks to its 38″ 3840×1600 144Hz IPS panel with fast response time, vibrant colors, G-SYNC, and DisplayHDR 600.

However, it’s not cheap and has its share of downsides that you should familiarize yourself with in order to ensure this gaming monitor is right for you.

If you’re after a 38″ ultrawide gaming monitor, the Dell Alienware AW3821DW is the only model that offers both a native G-SYNC module and DisplayHDR 600 certification, yet it is competitively priced. Here’s what you need to know about it and its alternatives.

Based on a Nano IPS panel, the Dell Alienware AW3821DW monitor delivers vibrant colors, covering over 95% of the DCI-P3 color space.

Its gamut is equivalent to ~131% sRGB, which provides rich and saturated colors with improved shade variety, especially with reds and greens.

Alas, Dell/Alienware didn’t include an sRGB emulation mode that could restrict the panel’s wide color gamut to ~100% sRGB for an accurate color representation of sRGB content (most games and web content).

This means that most of the content you see will be over-saturated. Some users might prefer this extra color vibrancy, but it’s not the intended look by creators.

Alternatively, if you have an AMD graphics card, you can clamp the gamut via the Radeon software by enabling ‘Custom Color.’ For NVIDIA users, there’s a third-party tool called novideo_srgb that does the same (and more).

Apart from that, the colors are vibrant, precise, and consistent across the entire screen and at all times thanks to the wide 178° viewing angles of the IPS technology.

Moving on, thanks to the monitor’s high 3840×1600 resolution, details and text are crystal-clear and you get plenty of screen space.

On the 37.5″ viewable screen, you get a pixel density of ~110 PPI (pixels per inch), which many consider to be the sweet spot as you don’t have to use any scaling yet you get a lot of screen real estate and a crisp picture.

Note that such high resolution is quite demanding to drive, so check some benchmarks of your CPU/GPU at 3840×1600 to see if you’ll get a satisfactory frame rate in your favorite games.

The ultrawide resolution also provides you with a more immersive gaming experience as you get a wider field of view (in supported games). 21:9 movies (2.35:1 or 2.39:1 to be precise) will also look great, without black borders at the top and bottom of the screen.

16:9 videos and unsupported games will have black bars at the sides of the screen, though. Alternatively, you can stretch or crop/zoom the image to fill the screen.

The Dell AW3821DW has a strong 450-nit peak brightness, which gets a boost up to 600-nits when watching HDR (High Dynamic Range) content for more vivid and punchy highlights.

Additionally, there are 32 dimming zones that can dim parts of the image that need to be dark without greatly affecting parts of the screen that should remain bright.

This can make HDR content appear significantly more immersive, but since there are only 32 zones across the entire 38″ screen and since the native contrast ratio is mediocre at 1,000:1, only some HDR scenes with bright and dark objects far apart will look notably better.

In other words, you’re not getting the ‘true’ HDR viewing experience. Some HDR content will look much better, some will look worse, and some will be just okay.

Another thing to keep in mind about IPS panel monitors is IPS glow. It’s characterized as a visible ‘glow’ around the corners of the screen. It’s mostly noticeable when watching really dark scenes in a dark room with high brightness setting.

The amount of IPS glow varies across different units of monitors, just like other defects, such as backlight bleeding, dead/stuck pixels, etc., but in most cases, it’s tolerable or negligible.

What drawbacks the Dell Alienware AW3821DW has regarding image quality, it makes up for when it comes to performance.

To start with, the monitor has imperceptibly low input lag at just ~4ms, while its 1ms GtG pixel response time speed is quick enough to eliminate ghosting behind fast-moving objects across the entire refresh rate range, without adding any noticeable overshoot.

There are three response time overdrive modes: Fast, Super Fast, and Extreme. We recommend sticking with the ‘Fast’ option, as the other two modes add too much inverse ghosting.

The monitor has a native G-SYNC module, which prevents screen tearing and stuttering up to 144FPS by providing you with a variable refresh rate (VRR) if you have a compatible graphics card (GTX 650 Ti Boost or newer).

As it uses one of the newer G-SYNC modules, variable refresh rate is also supported when using AMD graphics cards.

The Dell Alienware AW3821DW is branded as ‘G-SYNC Ultimate’, but unlike the initial several monitors with this certification, it doesn’t offer as good HDR image quality since it lacks full-array local dimming (FALD).

The G-SYNC Ultimate certification here simply implies that the monitor has a native G-SYNC module and ‘lifelike HDR.’

The first G-SYNC Ultimate certification requirements were much more demanding, including a 1,000-nit peak brightness and FALD, like the 384-zone or 512-zone FALD implementations of the ASUS PG27UQ and the Acer X35, respectively.

These two displays offer a much better (or ‘true’) HDR viewing experience, but they’re also more expensive due to the FALD solutions.

The OSD (On-Screen Display) menu of the Dell AW3821DW is well-organized and easy to work with thanks to the directional joystick placed at the rear of the monitor.

Below the joystick, you’ll find four additional hotkeys, three of which can be assigned to different shortcuts, while the power button is placed beneath the bottom bezel of the screen.

The backlight of the monitor is flicker-free as it doesn’t use PWM (Pulse-Width Modulation) to regulate brightness meaning that those sensitive to flickering won’t get headaches after prolonged use.

Dark Stabilizer alters the gamma curvature for better visibility in dark scenes, while Variable Backlight adjusts the speed and effectiveness of the local dimming zones (Mode 0 for gameplay, Mode 1 for mixed-use, Mode 2 for desktop use, and ‘Off’).

There’s also an ambient light sensor that will dynamically change the monitor’s brightness according to ambient lighting once enabled.

Other settings include the standard image adjustment tools (brightness, contrast, input source selection, etc.), but some advanced features are missing.

There are no gamma, sharpness, or hue/saturation settings – and there are only three color temperature modes (Warm, Cool, and Custom). You also won’t find Picture in Picture or Picture by Picture.

The RGB lighting settings, on the other hand, are plentiful.

The Alienware logo and LEDs across the back of the monitor’s stand can be customized to glow in various colors and patterns. You can customize these settings in the OSD menu or via the Alienware Command Center desktop application.

While the RGB lighting customization is generous, LEDs aren’t strong enough to reflect off of wall for atmospheric lighting – and you can’t sync it to on-screen video or audio.

Further, the screen has a matte anti-glare screen coating that prevents reflections, while the subtle 2300R curvature adds to the immersion.

Unlike the other 38″ ultrawide gaming monitors based on the same panel with G-SYNC, the Dell Alienware AW3821DW doesn’t offer a factory-overclocked refresh rate, though you could try overclocking it manually.

The G-SYNC module also has a cooling fan, which depending on the unit and your personal sensitivity, can be somewhat noisy.

The Dell Alienware AW3821DW goes for $1300, which makes it the most affordable and the best 38″ ultrawide gaming monitor available!

We recommend checking out the Dell AW3423DW at this price range.

It has a QD-OLED panel with an infinite contrast ratio, a higher peak brightness, a wider color gamut and no backlight bleeding or similar artifacts. On top of that, it supports G-SYNC up to 175Hz and has instantaneous pixel response time, resulting in much better HDR image quality and gaming performance.

The Dell Alienware AW3821DW offers an immersive and responsive gaming experience at a reasonable price.

Thanks to its low input lag, quick response time, high refresh rate and G-SYNC, you can enjoy smooth gameplay without any visual artifacts, while the vibrant colors, big screen with high resolution and strong peak brightness with local dimming take the picture quality to the next level.

While it can’t be factory-overclocked like the other G-SYNC models, we find that 144Hz is plenty at 3840×1600, and the difference between 144Hz and ~170Hz would be hardly noticeable anyway.

However, if you don’t mind having a smaller display, the Dell AW3423DW offers a much better HDR image quality and performance for the same price.