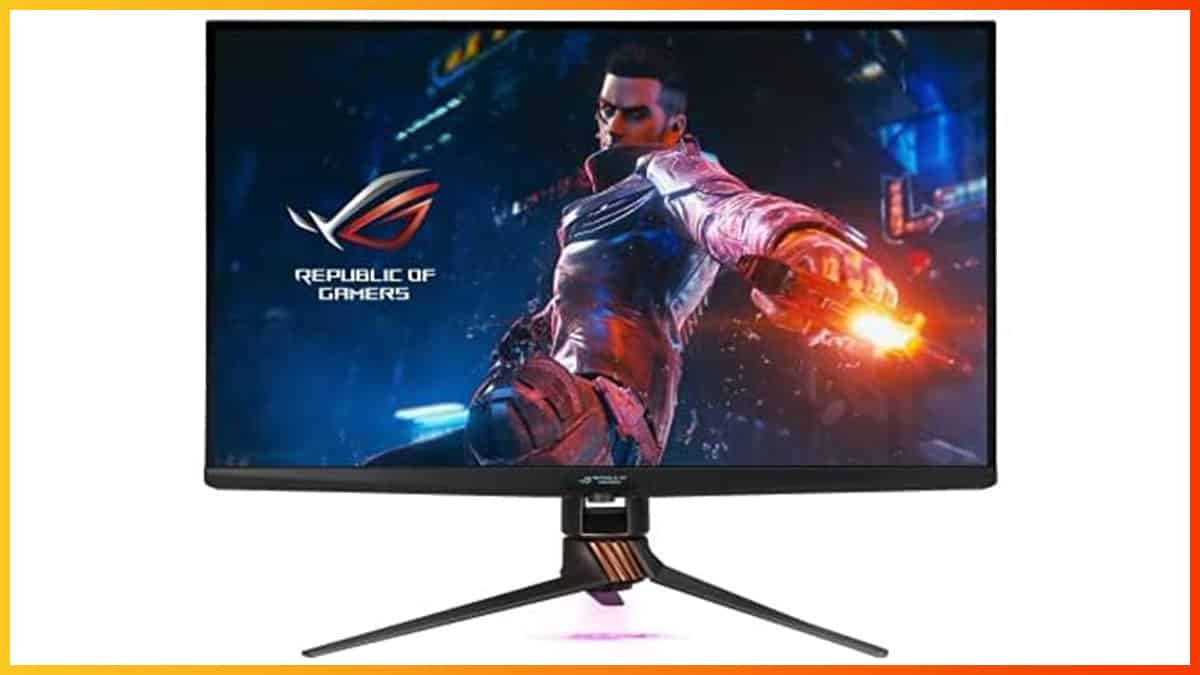 The ASUS PG32UQX is a 32″ 4K 144Hz IPS gaming monitor with G-SYNC Ultimate, DisplayHDR 1400, wide Adobe RGB and DCI-P3 gamut coverage and a 1152-zone mini LED FALD backlight. While it is an amazing HDR gaming monitor, it has a few flaws, one of them being the $3,000 price tag.

What differentiates it from most monitors currently available is the use of a mini LED backlight and an 1152-zone full-array local dimming solution.

This allows for a stellar peak brightness of over 1,400-nits and a high contrast ratio for the ‘true’ HDR viewing experience, while NVIDIA’s G-SYNC Ultimate certification ensures smooth HDR performance even while gaming.

Of course, all of this quickly adds up to the price, making it one of the most expensive gaming monitors available. Is it worth the money? Let’s find out!

Right out of the box, the monitor is actually in its sRGB emulation mode which clamps its native ~160% sRGB gamut to ~100% for the accurate representation of SDR content.

For more saturated colors, you just need to change the ‘Display SDR Input’ to ‘Wide Gamut’ under ‘Image’ settings in the OSD (On-Screen Display) menu.

Sadly, there are no separate modes for DCI-P3 and Adobe RGB, so if you want to use the screen for professional color-critical work, the monitor does have the capabilities – but you’ll need a colorimeter to profile it for color-managed applications.

As a result, you get a truly incredible HDR picture quality where you can simultaneously have both bright highlights and deep blacks – in addition to the vibrant colors and crisp details provided by the monitor’s high resolution and wide color gamut.

However, as there are over 8 million pixels and ‘only’ 1152 dimming zones, not every pixel can be individually controlled like on OLEDs. So, in some scenarios, light from illuminated objects can bleed into the surrounding dimmed zones thus creating the halo or bloom effect.

This is most noticeable in scenarios where local dimming shouldn’t be used (and it can be disabled). For instance, when moving a tiny white cursor across a dark background.

Some scenes are particularly demanding though, and you will be able to notice blooming – a night sky or space full of stars is the worst-case scenario for the ASUS PG32UQX as some parts of the sky will look brighter than the rest due to the halos of stars.

In addition, as this is an IPS panel display, some IPS glow and backlight bleeding (intensity will vary across different units) will be visible too, which might take away from the viewing experience in a dark room. It’s a lot less noticeable than on an average IPS monitor thanks to the FALD system though.

Overall, you get an amazing HDR image quality, but some scenes might break your immersion due to the blooming. Keep in mind that an OLED display at half the price offers an infinite contrast ratio with no glowing, bleeding, or blooming of any kind.

Of course, OLEDs have other disadvantages.

Firstly, the peak brightness is not nearly as high, and secondly, there’s a risk of permanent image burn-in.

Moving on, the ASUS PG32UQX has imperceptible input lag of just ~3ms.

The pixel response time speed, however, is not as perfect. There are three overdrive options: Off, Normal, and Extreme. The ‘Normal’ option is the best one across the entire refresh rate range as it offers the best balance between ghosting and inverse ghosting.

While there’s no eye-catching dark level smearing usually associated with slow VA panel gaming monitors, some trailing is noticeable with fast-paced content, though it will not bother most users – it’s just that the PG32UQX is not as fast as the modern IPS displays we’re used to.

Competitive gamers might find it a bit bothersome, but this monitor really isn’t aimed at competitive gaming anyway.

The dedicated G-SYNC module provides a variable refresh rate (VRR) for compatible GPUs, which ensures that there’s no screen tearing or stuttering up to 144FPS.

Related:What Is G-SYNC And What Does It Do?

This is the first G-SYNC module with DSC 1.2 (Display Stream Compression) support over DisplayPort 1.4, so you can enjoy 4K UHD resolution up to 144Hz with 10-bit color depth without any noticeable compression artifacts.

It also allows VRR to be used with AMD cards over DisplayPort. Over HDMI, FreeSync is not supported, but VRR works with the Xbox Series X up to 120Hz.

The backlight of the monitor is flicker-free as it doesn’t use PWM (Pulse-Width Modulation) to regulate brightness, so you don’t have to worry about headaches caused by prolonged use of the screen if you’re sensitive to flickering.

Beneath the bottom bezel of the screen, you’ll find three hotkeys in addition to a dial for navigation through the menu. It takes some time getting used to, but it’s intuitive and the menu is well-organized.

There’s also a small 2-inch ‘LiveDash’ OLED panel on the bottom bezel that can display system parameters (GPU/CPU temperature, etc.), monitor features (such as which picture preset is active or the refresh tracker), and custom gifs. It can also be disabled.

Additionally, Aura Sync RGB is supported, so you can synchronize your RGB LEDs with the logo projector at the base or the ROG logo at the rear of the monitor.

Standard image adjustment tools are available as well as the more advanced settings, including 6-axis hue/saturation, eight color temperature presets, and five gamma presets (from 1.8 to 2.6, plus selectable sRGB or BT.1886 gamma curve).

There’s also a low-blue light filter and a light sensor that can adjust the screen’s brightness according to ambient lighting.

You can also change the speed of the variable backlight (Fast, Medium, and Gradual – or Off), which we recommend leaving at ‘Fast’ for gaming.

The ASUS PG32UQX features a recognizable ROG design with a sturdy and versatile stand. You get up to 70mm of height adjustment, +/- 20° swivel, -5°/20° tilt, and 100x100mm VESA mount compatibility, but no pivot.

Further, the screen has a light anti-glare matte coating which prevents reflections without adding any graininess. Note that the monitor also has a cooling fan, but it’s fairly silent.

Connectivity options include DisplayPort 1.4 with DSC, three HDMI 2.0 ports, a dual-USB 3.0 hub, and a headphone jack. At the top of the screen, you’ll also find an extra USB 2.0 port and a tripod socket for easy webcam mounting.

Using chroma subsampling will make text look a bit smudgy when it’s displayed on colored backgrounds, but it should be perfectly fine for gaming, especially if you’re sitting a bit further from the screen.

However, we highly recommend the Dell AW3423DW instead. It uses a QD-OLED panel for an infinite contrast ratio and instantaneous response time speed. It doesn’t get as bright as mini LED monitors, but it offers an overall better HDR image quality and smoother performance for half the price.

In 2022, there will also be more affordable mini LED monitors, all of which you can check out in our New Monitors article.

All in all, the ASUS PG32UQX is an amazing gaming monitor – expensive, but amazing!

Some minor haloing/blooming is noticeable in certain scenes, but nothing extreme. If you’ve got the money and want the best HDR gaming experience on a monitor, the PG32UQX is your best choice by far, at least at the moment.