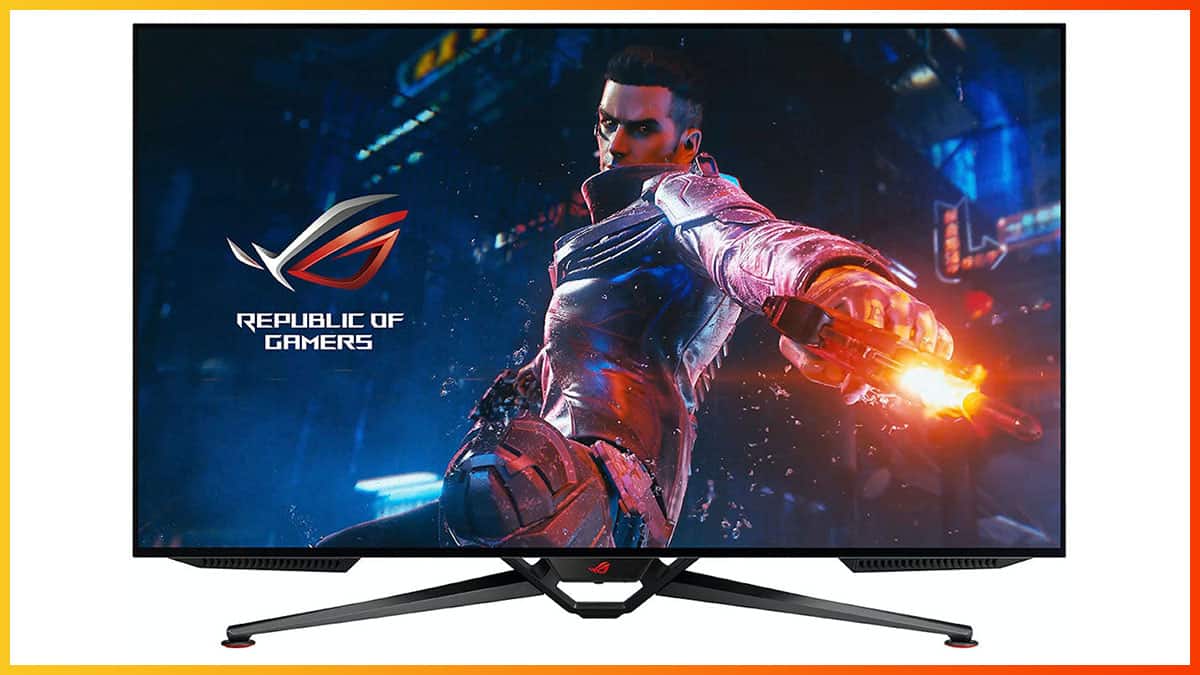 The ASUS PG42UQ is an excellent 42″ 4K 120Hz (138Hz OC) OLED gaming monitor with HDMI 2.1. We feel that for most users, the choice between it and the LG OLED42C2 mainly comes down to the user’s personal preference regarding the screen coating. Of course, there are other things to consider too, as explored in the review.

Based on an OLED panel, the ASUS ROG Swift PG42UQ provides you with an infinite contrast ratio for true blacks and an instantaneous pixel response time speed for zero visible trailing behind fast-moving objects.

As there is no backlight (each pixel produces its own light), there’s no backlight bleeding, haloing, blooming, IPS/VA glow or other similar visual artifacts associated with LED-backlit panels.

The main downside of OLED panels, however, is the risk of permanent image burn-in and not as high brightness as that of competing LED and Mini LED displays.

As long as you’re mindful about how you use the display, burn-in shouldn’t be an issue. Use the monitor’s burn-in preventing features, such as screen saver, pixel refresh (Pixel Cleaning), pixel shift (Screen Move), and Adjust Logo Brightness.

There’s also an sRGB emulation mode that can restrict the color output to 100% sRGB in case you prefer accuracy to over-saturation with SDR content.

Further, 4K UHD resolution looks great even on the 41.5″ sized screen of the PG42UQ. You get a pixel density of 106 PPI (pixels per inch), which results in plenty of screen real estate with sharp details and text, and no scaling necessary.

Currently, the PG42UQ and the LG OLED42C2 are the smallest 16:9 high refresh rate OLED displays you can get. While most users will find them too big for regular desktop use, they’re still much more viable than the 48″ models.

You can also create a custom 3840×1600 resolution for the wider 21:9 aspect ratio; this essentially turns the PG42UQ into a ~40″ ultrawide display with black borders at the top and bottom of the screen. Although having black bars isn’t ideal, they’re truly black thanks to the OLED panel, so they’re not that distracting.

The monitor uses LG’s OLED panel with an RGBW subpixel layout, so text rendering isn’t perfect, but most users won’t be bothered by it or even notice any problems. The text fringing isn’t as noticeable as it is on Samsung’s QD-OLED panels. For gaming and content consumption, it’s not an issue at all.

Now, let’s tackle the brightness performance of the PG42UQ.

So, if you have set your brightness to around 200-nits, viewing a 50% white window (for instance, a mostly blank word document on one half of the screen) will be limited to 200-nits.

However, if you were to maximize that document to full screen (100% white window), the brightness would drop to 120-nits due to ABL (Automatic Brightness Limiter). These jumps in brightness can become frequent and annoying unless you limit the brightness to 120-nits.

Luckily, ASUS developed a feature called ‘Uniform Brightness’ to prevent this. Once enabled, the display can maintain up to 200-nits constantly regardless of bright window sizes. This feature doesn’t work when HDR is enabled.

We recommend using HDR Cinema as it’s the most accurate mode. HDR Gaming can get a bit brighter (up to 900-nits for <10% white windows), but it achieves that by increasing the color temperature, which adds a cold/bluish tint to the image.

HDR Console is limited to ~550-nits and has no advantages over using HDR Cinema, which can reach up to 800-nits for <10% white windows and also offers proper color temperature close to 6500K.

While ASUS specified a maximum brightness of 450-nits for SDR and 900-nits for HDR, these are actually achieved by setting the color temperature to 10000K, which makes everything bluish.

It’s definitely an odd marketing move considering that any display could achieve higher brightness with such impractical color temperature, but what’s the point of making everything brighter when everything else looks worse (and blue)? Hopefully, this doesn’t become another trend of misleading monitor specifications.

Regardless, the ASUS PG42UQ actually offers excellent brightness levels. Thanks to its heatsink, it’s notably brighter (100-nits brighter <10% windows) than LG’s C2 TV based on the same panel.

The Dell Alienware AW3423DW with a QD-OLED panel is still brighter overall – firstly, it’s generally brighter in the >50% and <3% window sizes, and secondly, it has a wider color gamut, which further increases perceived brightness.

As already mentioned, OLED displays have instantaneous pixel response time speed, so there’s no ghosting or overshoot behind fast-moving objects regardless of your refresh rate.

You can also overclock the monitor up to 138Hz for a tiny boost in motion clarity, though it’s hardly noticeable in comparison to 120Hz. Input lag is ~1ms, which is imperceptible.

It supports a variable refresh rate (VRR) through AMD FreeSync, NVIDIA G-SYNC Compatible and HDMI 2.1 VRR for tear-free gameplay up to 138FPS.

As it’s the case with all OLED panels, some near-black gamma shifts can occur when using VRR, though it’s rare and only noticeable in particularly dark scenes. In the worst case, it’s tolerable and most users won’t even notice these visual artifacts.

Sadly, the ASUS ROG Swift PG42UQ does not support BFI (Black Frame Insertion) for even better motion clarity. The LG OLED42C2 TV does support this feature, but only at 60Hz, which isn’t that useful anyway. So, if you’re a fan of CRT-like motion clarity and OLED displays, the 48C1 is your best bet as it supports BFI at 120Hz.

While the monitor doesn’t use PWM (Pulse Width Modulation) to regulate brightness, there are slight fluctuations in brightness (every 8.33ms at 120Hz and every 7.25ms at 138Hz), but they’re not noticeable in real use and won’t bother those sensitive to flickering. There’s also an integrated low-blue light filter.

Beneath the bottom bezel of the screen, there’s a directional joystick for quick and easy navigation through the OSD (On-Screen Display) menu. It also comes with a remote controller.

Picture in Picture and Picture by Picture modes are supported too.

As previously mentioned, there are built-in features that help minimize the risk of temporary image retention and permanent image burn-in.

These include Screen Saver (automatically decreases screen brightness when there’s no activity), Pixel Cleaning (when the monitor is off, this feature will run for 6 minutes to ‘refresh’ the pixels), Screen Move (moves the image by a few pixels every now and then) and Adjust Logo Brightness (automatically detects static and bright elements in the image and decreases their brightness).

The stand of the monitor is sturdy and, unlike OLED TVs, even offers tilt adjustment (though by just +/- 5°). You can also mount the screen via the 300x300mm VESA pattern.

The screen has a micro-texture anti-glare matte coating that’s efficient at preventing reflections without adding too much graininess, but the picture isn’t quite as vivid as that of glossy panels (nor as reflective for that matter).

At the top of the screen, there’s also a tripod mount for webcams next to one of the USB ports.

Perhaps the main difference between the two is the panel coating, which comes down to personal preference and ambient lighting in your room.

If you plan on using the screen in a well-lit room, the matte coating and higher brightness of the ASUS PG42UQ will better mitigate glare, resulting in a more comfortable viewing experience.

In case you intend on using the display in a dark room (or under controlled lighting), the glossy panel offers more vivid image quality and the 100-nit lower brightness of the 42C2 becomes less significant.

With the C2, you also get integrated smart TV features and Dolby Vision support. The ASUS PG42UQ offers a slightly higher 138Hz refresh rate and a DisplayPort input.

However, if you have a GPU with HDMI 2.1, you don’t gain anything by using DisplayPort instead, while the difference between 120Hz and 138Hz is basically imperceptible (given that you can output 138FPS at 4K in the first place).

Your best alternative is the Dell AW3423DW. It uses a QD-OLED panel with a higher brightness, wide color gamut and a higher 175Hz refresh rate. It also has a three-year warranty that covers burn-in. While it has a lower 3440×1440 resolution, you actually get a slightly higher pixel density in comparison to 42″ 4K.

The AW3423DW has its disadvantages too, though. It has a triangular RGB subpixel layout that causes noticeable fringing on small text and thin edges, but a lot of users find it tolerable (it’s not an issue in games and videos). Further, it uses a peculiar screen coating that raises blacks under direct lighting.

Another option is the Samsung Neo G7 32″ 4K 240Hz monitor with an 1196-zone mini LED FALD backlight. It gets even brighter (up to 1,200-nits), but it doesn’t have an infinite contrast ratio and there’s some backlight bleeding and blooming. Moreover, it has an aggressive 1000R screen curvature that won’t appeal to some users.

If you don’t find any of these displays interesting, consider one of the upcoming monitors or check out our comprehensive best gaming monitor buyer’s guide for more options and information.

All in all, the ASUS ROG Swift PG42UQ is an amazing gaming monitor. The choice between it and LG’s 42″ C2 TV comes down to the user’s personal preference regarding screen coating and exclusive features, as well as pricing and availability.