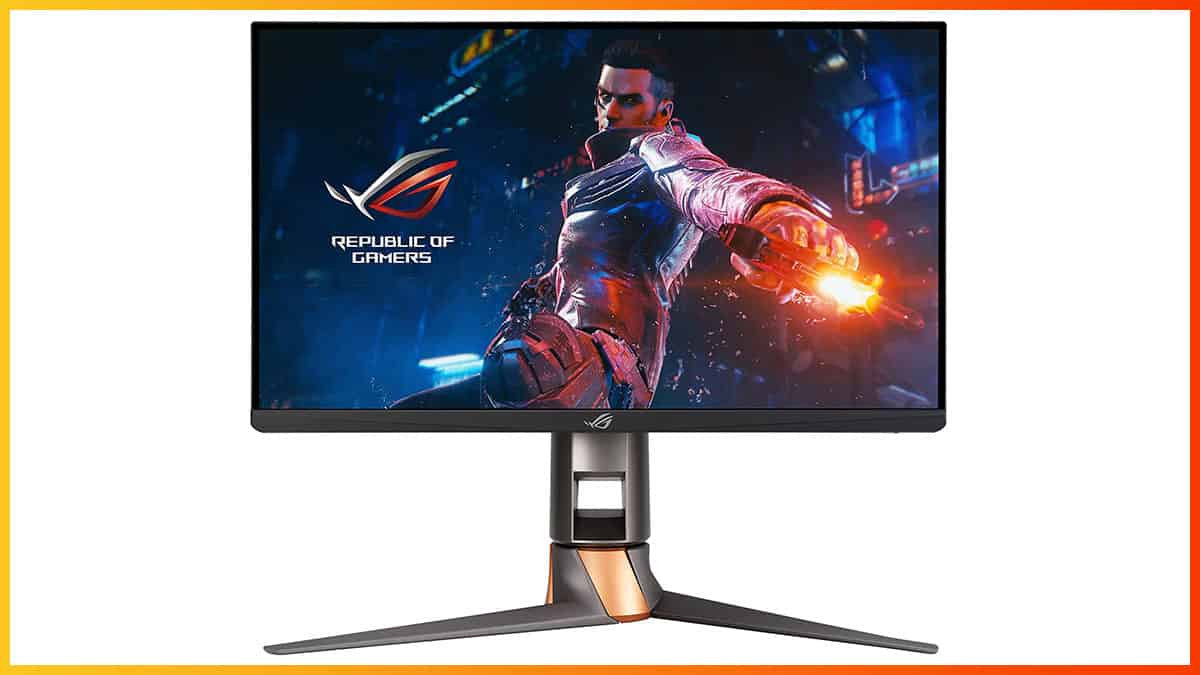 The ASUS PG259QN is one of the best gaming monitors available for serious competitive gaming thanks to its 360Hz refresh rate, fast pixel response time, and NVIDIA G-SYNC. It also offers plenty of additional features, such as ULMB, ergonomic design with RGB lighting, and more!

For average gamers though, the premium cost of 360Hz and G-SYNC most likely won’t be worth the double price over the 240Hz FreeSync IPS models as the improvement in motion clarity is rather minor.

The ASUS ROG Swift PG259QN is one of the first 360Hz gaming monitors available!

In addition, it features rapid response time, low input lag, and NVIDIA G-SYNC with ULMB, which makes this display an absolute delight for competitive gamers.

Average gamers, on the other hand, may not be as fascinated by it due to its low 1080p resolution and high price tag, but this display is intended only for the most hardcore FPS players out there.

The ASUS PG259QN 360Hz gaming monitor is based on an IPS panel by AU Optronics with the main specifications being 1,000:1 contrast ratio, 400-nit peak brightness, 10-bit color depth support via dithering, and standard ~99% sRGB color gamut.

This means that, on top of the smoothest gaming experience possible, you also get accurate and consistent colors with wide 178° viewing angles!

So, blacks won’t be as grayish as they are on LG’s models, but they won’t be as deep as those of VA panels with a ~3,000:1 contrast ratio either.

Paying ~$700 for a 1920×1080 monitor may seem a bit strange, but such low resolution is required to actually use the full potential of this gaming monitor by reaching ~360FPS.

What’s more, 1080p looks pretty good on 24.5″ sized monitors due to the decent pixel density of 90 PPI (pixels per inch), which results in respectable detail clarity and a fair amount of screen real estate.

HDR (High Dynamic Range) is supported as well, but due to the monitor’s lack of wide color gamut and local dimming, among other things, HDR content won’t look any better.

Keep in mind that all IPS monitors suffer from IPS glow which is characterized as visible ‘glowing’ around the corners of the screen due to excess light passing through the panel.

This is an expected drawback and its intensity varies across different units of the monitor. In all but most extreme cases though, it’s completely manageable.

Although even the difference between 144Hz and 240Hz isn’t exactly game-changing for most gamers, serious competitive players will often go all out to get the fastest and most responsive gaming displays available.

The jump to 360Hz from 240Hz is even less apparent than going from 144Hz to 240Hz, but the difference is definitely there. You can notice and feel it, which is more than enough reason for competitive gamers to want it.

What is quite noticeable, however, is the difference between 144Hz and 360Hz!

The ASUS PG259QN has a surprisingly fast pixel response time speed, sufficient to eliminate all ghosting behind fast-moving objects.

There are three response time overdrive modes: Off, Normal, and Extreme.

The Off mode isn’t fast enough while the Extreme setting introduces too much overshoot.

The Normal option works perfectly fine and introduces only very minor pixel overshoot in some scenarios.

Variable overdrive of the G-SYNC module will keep both ghosting and inverse ghosting at bay across the entire refresh rate range of the monitor.

So, whatever your frame rate is, the Normal mode will work best while G-SYNC eliminates all screen tearing and stuttering up to 360Hz/FPS.

Adaptive-Sync is supported as well, so you can use variable refresh rate with AMD graphics cards as well.

Further, the ASUS PG259QN monitor has an incredibly low input lag of just ~1ms, so there’s no delay between your actions and the result on the screen.

As an alternative to G-SYNC, you can use NVIDIA ULMB (Ultra Low Motion Blur) which further reduces perceived ghosting by backlight strobing.

It cannot be active as the same time as G-SYNC, and it only works at fixed refresh rates of either 144Hz or 240Hz. Moreover, maximum brightness is reduced while ULMB is active, but thanks to the monitor’s strong peak brightness, this won’t be an issue.

While backlight strobing makes for smoother motion clarity in general, you do lose on fluidity provided by the extra frames at 360Hz.

Unfortunately, there’s is some strobe crosstalk and double-image effects with ULMB, and the image is actually clearer at 144Hz than at 240Hz. It’s a shame this technology wasn’t tweaked by Blur Busters under their certification program for better performance.

For navigation through the OSD (On-Screen Display) menu, there’s a directional joystick at the back of the monitor along with four additional hotkeys (two of which you can assign to your own shortcuts).

At the back of the monitor, there’s the ROG logo with RGB lighting that can be synchronized with the rest of your AuraSync compatible peripherals.

The bezels are ultra-thin at the top and at the sides of the monitor while the screen has a matte anti-glare coating that eliminates reflections without making the picture appear grainy.

We highly recommend checking out the Acer XV252QF 360Hz monitor instead (it’s even overclockable to 390Hz). It doesn’t have a G-SYNC module, but supports AMD FreeSync and it’s G-SYNC Compatible. It also supports backlight strobing all the way up to 390Hz.

If you want a 360Hz G-SYNC gaming monitor, we recommend the Dell AW2521H instead of the PG259QN. It has less overshoot, an extra HDMI 2.0 port, two additional USB 3.0 ports, and NVIDIA Reflex Analyzer, but it doesn’t support FreeSync. Be sure to check out our AW2521H review for more information.

Note that ASUS, Acer, Dell-Alienware, and MSI all offer 360Hz gaming monitors based on the same panel and with the added support for NVIDIA Reflex Analyzer.

Depending on the region, availability, and your personal preference of design and features, you should check them out as well.

While 360Hz won’t make you a better player, it will certainly make the gaming experience more enjoyable.

Of course, the rapid 360Hz refresh rate paired with fittingly quick response time and low input lag is not the only advantage of the ASUS PG259QN as you also get rich and accurate colors with wide viewing angles!