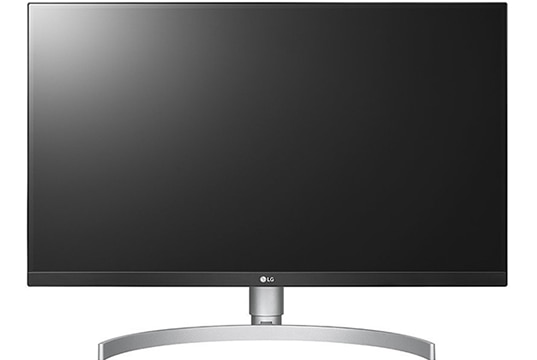 The LG 27UK850 offers all-around balanced performance for gaming, work, and everyday use thanks to its many useful features and stunning image quality.

Looking for a 4K monitor with a USB-C port that supports enough power delivery to charge your laptop?

Want FreeSync and HDR for PC/console gaming as well? Well, the LG 27UK850 offers all that for a reasonable price!

The LG 27UK850-W monitor is based on an IPS panel, which ensures accurate, consistent, and vibrant colors making this display adequate for professional photo-editing tasks.

The 4K UHD resolution ensures stunning detail clarity with over 8 million pixels, which on the 27″ screen of the LG 27UK850 display result in a high pixel density of 163 pixels per inch.

Such high pixel density will make everything look tiny, so you will have to scale up your interface, which will, in turn, make everything bigger, crispier, and more detailed.

Further, the typical peak brightness of 350-nits will get a small but noticeable boost to 450-nits when watching HDR-compatible content.

Nonetheless, some HDR content actually does look better and more vibrant on the LG 27UK850, but not nearly as good as it does on some more capable (and more expensive) HDR monitors.

There is minimal backlight bleeding, and IPS glow present on the LG 27UK850 4K monitor while the input lag performance is top-notch, amounting to around 10ms.

Overall, the monitor’s performance is without issues. The wide 178° viewing angles will ensure that the picture looks awesome, no matter the angle you’re looking at the screen.

In addition, the LG 27UK850 is flicker-free and has an integrated filter against the harmful low-blue lights.

When it comes to gaming, set the ‘Response Time’ setting in the OSD (On-Screen Display) menu to ‘Faster’ to get the advertised 5ms response time speed.

There’s no prominent ghosting or motion blur visible even in fast-paced video games though a 60Hz refresh rate will feel very sluggish if you’re used to higher refresh rate displays; however, if you prefer better graphics over performance, 4K more than makes up for it. 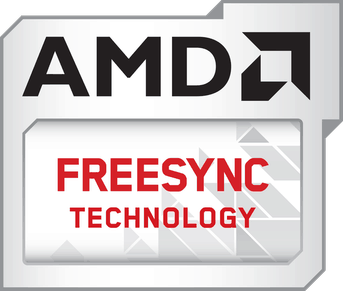 You will find all the common features found on LG monitors such as On-Screen Control (to adjust OSD settings in a desktop app), Screen Split (to divide the screen into different layouts for multitasking), and advanced picture alterations such as 6-axis, gamma, etc.

Other gaming features include Black Stabilizer, which alters the gamma curve for more visible details in dark parts of the image, Dynamic Action Sync, which further lowers input lag, and pre-calibrated picture presets for FPS and RTS game genres.

Finally, the LG 27UK850 supports AMD FreeSync, which provides a variable refresh rate if you connect the monitor to a compatible AMD graphic card or an Xbox One console.

FreeSync removes all screen tearing and stuttering with minimal input lag penalty for a smoother gaming experience. The LG 27UK850 FreeSync range is 40-60Hz/FPS (Frames Per Second). So, as long as your FPS rate stays within that range, you’ll face no screen tearing nor stuttering.

While FreeSync works without problems when used with AMD cards and the Xbox One, users with compatible NVIDIA cards may run into some issues depending on the particular unit of the monitor, the graphics card, and its driver version. 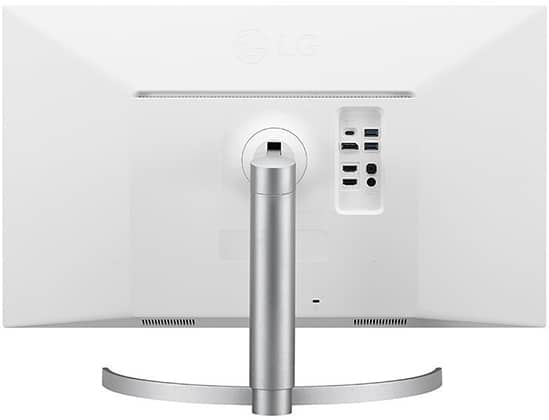 The design of the monitor is modern yet simple with thin bezels, so it will fit in any environment.

Moreover, it offers versatile ergonomics including up to 110mm height adjustment, -5°/20° tilt, 90° pivot, and 100 x 100mm VESA mount compatibility, but you cannot swivel the screen to the left or right.

The USB-C port supports DisplayPort Alternate Mode and power delivery up to 60W. So, you can simultaneously transfer 4K video, audio, data, and power to a compatible device with just one cable.

Note that when the USB-C port is not used as the upstream port, the USB hub is limited to the USB 2.0 bandwidth.

All display connectors also support HDCP 2.2, so you can stream content from Netflix, Amazon Video, etc. in 4K UHD. FreeSync works over both HDMI and DisplayPort with a 40-60Hz dynamic range.

The only difference between these two models is that the UL850 has DisplayHDR 400 certified HDR support.

However, its specs are just tweaked up to get this certificate. The HDR picture quality won’t actually be any better as the display still lacks a wide color gamut and proper contrast ratio.

We recommend checking both models and just going for whichever is cheaper. In case you want an even more affordable USB-C monitor, check out the Philips 272P7VUBNB, which goes for just $350.

The Philips 272P7VUBNB supports power delivery up to 65W, and it even features an Ethernet port, a wider sRGB gamut, and better factory-calibration.

All in all, the LG 27UK850 IPS monitor is perfect for anyone who wants a 4K display with HDR, FreeSync, and USB-C.

If you don’t care for HDR and AMD FreeSync though, there are more cost-effective alternatives.