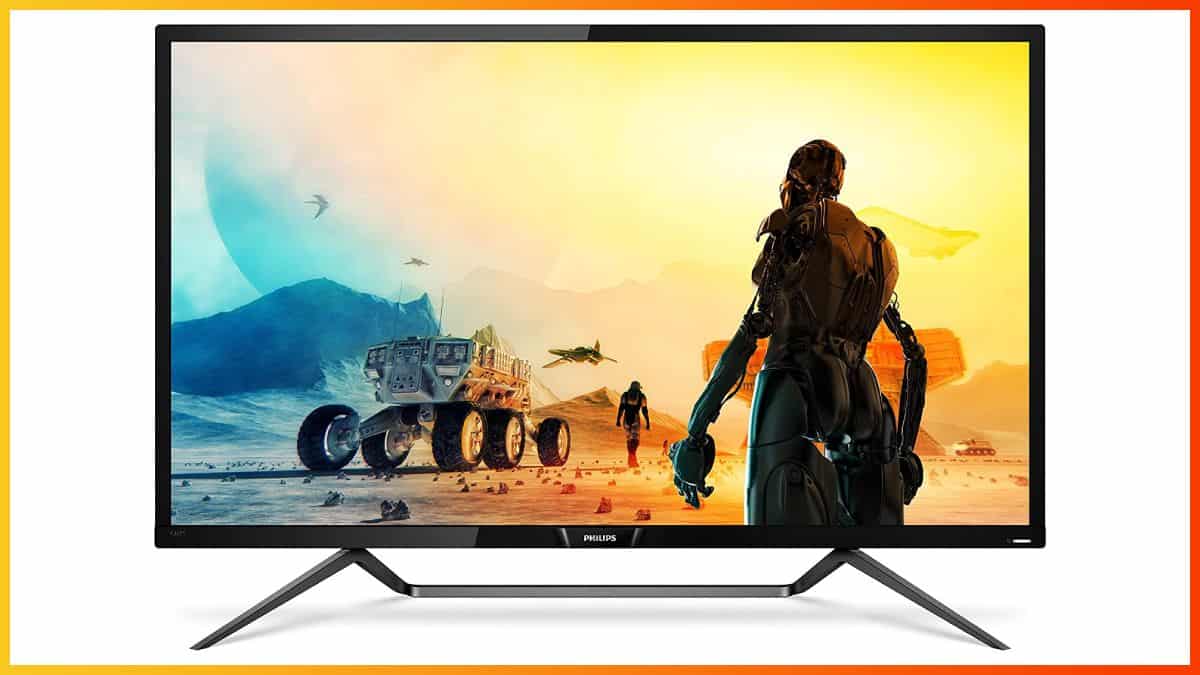 If you’ve ever wanted a monitor that’s as big as a TV, but with all the advantages of a monitor, the Philips 436M6VBPAB offers just that!

This giant 43″ display has input lag and response time performance that’s unmatched by any TV in this price range.

Moreover, it offers some exclusive features such as AMD FreeSync and HDR10 (High Dynamic Range) support.

Thanks to its quantum dot technology, the monitor delivers rich colors that cover 97.6% of the DCI-P3 color space amounting to 145% sRGB or 119% NTSC color gamut.

In addition to the wide color gamut and high contrast, the Philips monitor has a typical stellar luminance of up to 720-nits and a peak brightness of over 1,000-nits for HDR content.

In short, the monitor offers a stunning image quality with vibrant colors, true blacks, and vivid details in shadows and highlights of the picture.

However, due to its huge screen size, the display isn’t as good for the regular desktop use as it’s for watching movies and console gaming.

If you are looking at the screen from up close, text will appear somewhat fuzzy and unclear, but it’s tolerable for everyday web-surfing, check e-mails, and playing PC games.

The Philips 436M6VBPAB input lag is only ~6ms, which is far lower than any TV can achieve at this price range.

Furthermore, with a response time of 4ms in overdrive (the Smart Response feature) or ~7ms without, there’s very little ghosting and motion blur visible in fast-paced games, even in darker scenes.

Of course, an OLED TV would provide you with faster response time, but it’s also considerably more expensive. No LED TV comes close to the Philips 436M6VBPAB when it comes to the pixel transition speed.

The monitor has a 32-zone localized dimming solution, which helps dim the parts of the image that need to be dark; this further increases the contrast ratio up to ~7,000:1.

A full-array local dimming would be even better, but it would also greatly increase the price of the Philips 436M6VBPAB monitor.

There were no dead pixels nor excessive backlight bleeding.

What’s more, the monitor is factory-calibrated and offers stunning image quality and performance straight out of the box.

You can either use the provided remote controller or the OSD-joystick on the monitor to navigate and adjust OSD (On-Screen Display) settings.

For the best input lag performance, remember to leave the ‘Low Input Lag’ setting on in the Setup section of the OSD menu.

Besides the standard adjustments such as brightness, contrast, gamma, and color temperature, you will find additional exclusive features, including the Picture in Picture and Picture By Picture modes and advanced audio settings (EQ, DTS).

Apart from that, the Philips 436M6VBPAB HDR PC monitor features the Ambiglow technology, which consists of RGB LEDs that can synchronize to the colors on the image and produce glow beneath the bottom bezel of the screen.

There are also three different HDR modes, including VESA HDR 1000, UHDA, Normal, and Off.

You should use it depending on what type of content you are playing, the viewing distance, and overall preference though we found VESA preset to work best for the most part.

The monitor supports HDCP 2.2, so you can stream content from Netflix, Amazon Video, etc. in native 4K. Lastly, the screen is flicker-free and has a low blue light filter.

Moving on, the Philips 436M6VBPAB also supports the AMD FreeSync technology, but with a limited 48-60Hz range.

This means that if you have a FreeSync-compatible graphics card or an Xbox One S or X console, the monitor will change its refresh rate according to the GPU’s frame rate within 48-60Hz/FPS range. 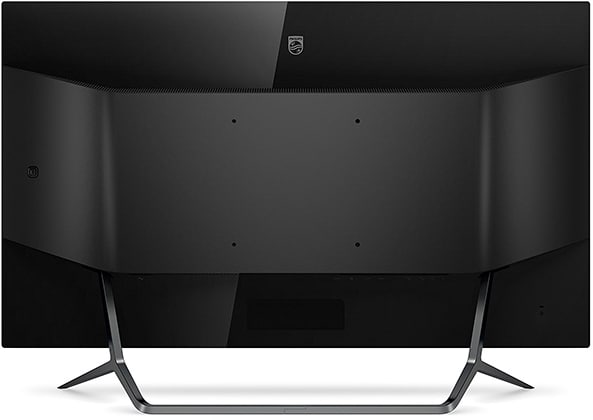 The Philips 436M6VBPAB design resembles a TV though it’s possible to tilt the screen by -5°/10° and VESA mount it using the 200 x 200mm pattern. The stand is made of aluminum while the chassis sports black glossy plastics.

Just like most TVs, the 436M6VBPAB has a glossy screen surface, which makes the colors more vivid but also causes the screen to be reflective under strong lights.

The Philips 436M6VBPAB price amounts to ~$800 and it’s one of the best monitors for console gaming available at the time of this writing.

At this price range, we recommend checking out the TCL R635 TV. It offers a much better image quality than the Philip 436M6 and it supports 120Hz at 1440p!

Overall, if you want the most amazing monitor for console gaming in terms of both immersion and gameplay responsiveness, the Philips 436M6VBPAB is definitely for you.

However, bear in mind that for basically the same price, you could get a 4K HDR TV, with a better image quality and only slightly higher input lag and slower response time.