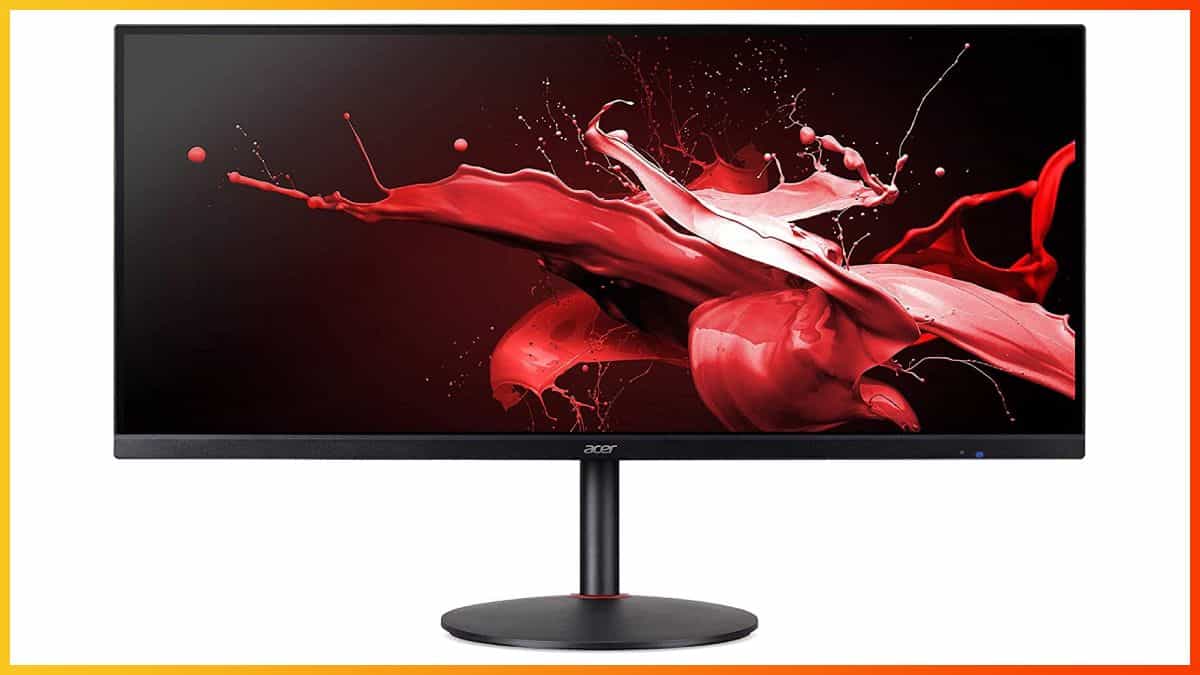 The Acer XV340CKP offers accurate and vivid colors, wide viewing angles, and crisp details thanks to its 34″ 3440×1440 IPS panel while the 144Hz refresh rate, low input lag, good response time speed, and AMD FreeSync ensure buttery-smooth gaming performance. There are plenty of additional features including an ergonomic design and extensive connectivity options. Some users might find the low brightness and the flat screen to be a deal-breaker though.

The Acer Nitro XV340CK P is yet another 34″ 3440×1440 144Hz ultrawide gaming monitor. However, unlike most models with these specs, this one features a flat screen and an affordable price for an IPS panel!

Such high pixel density allows for plenty of screen space with sharp details and text without any scaling necessary!

The monitor covers the standard sRGB color space (99% sRGB gamut) and thanks to its IPS panel, the colors will be accurate and consistent across the entire screen; 8-bit color depth is supported without dithering (true 8-bit color).

Wide color gamut is not supported as it is with some other ultrawides at this price range which would make colors appear more vibrant and saturated, but this way, you get more precise and realistic color output.

Other panel-related specifications include a static contrast ratio of 1,000:1 which is standard for IPS panels. It won’t provide as deep blacks as those of VA panels with a ~3,000:1 contrast ratio, but the VA technology has disadvantages of its own.

Further, the Acer XV340CKP has a peak brightness of 250-nits which seems to be the main issue people have with this monitor.

Indeed, if there’s a lot of direct sunlight in your room, the Acer XV340CKP won’t be able to fight through the glare at its maximum brightness. So, you’ll have to use some curtains or blinds in your room.

Under normal viewing conditions, the peak brightness of 250-nits will be sufficient.

Another issue is due to the monitor’s very wide yet flat screen. Usually, ultrawide displays have curved screens for better immersion and less distortion.

Even though the Acer XV340CKP IPS monitor has wide viewing angles that ensure that the colors remain perfect regardless of the angle you’re looking at the screen, there is some minor brightness shift noticeable if you’re sitting too close to the screen.

At a normal viewing distance (~ 2.5ft/75cm), the brightness shift at the left and right side of the monitor becomes unnoticeable.

As it’s the case with all IPS monitors, some IPS glow and backlight bleeding is visible. The amount of visible glow/bleed varies across different units of the monitor, but in most cases, it’s completely manageable.

The Acer XV340CKP input lag amounts to only ~4ms which makes for imperceptible delay between your actions and the result on the screen.

So, some trailing is visible behind fast-moving objects, but unless you’re a really hardcore/competitive FPS gamer, it won’t be an issue. If that’s the case, you should be getting a faster 1080p 240Hz display anyway.

The specified response time speed of 1ms actually refers to the MPRT value which you can get when you enable the Visual Response Boost (VRB) technology.

VRB strobes the backlight at a fixed refresh rate (80Hz, 100Hz, or 120Hz) in order to further eliminate trailing in fast-paced games, but it sacrifices picture brightness and it can’t work at the same time as FreeSync.

In order to prevent double images, you should use VRB at either 100Hz or 120Hz, but for the best performance, you’ll also need to maintain steady 100FPS or 120FPS, respectively. We recommend using FreeSync instead.

FreeSync allows the monitor to change its refresh rate dynamically (Hz=FPS) in order to completely eliminate screen tearing and stuttering without a noticeable input lag penalty.

Even though the Acer XV340CKP is not certified as G-SYNC Compatible by NVIDIA, FreeSync works without any issues with compatible NVIDIA cards (GTX 10-series or newer)! You just have to enable it manually.

When FreeSync is enabled, the monitor’s response time overdrive option (Off, Normal, Extreme) becomes locked to ‘Normal’. We recommend sticking with this mode anyway as ‘Extreme’ adds inverse ghosting.

However, due to its low peak brightness and contrast as well as lack of local dimming and wide color gamut, HDR is just software-emulated. In other words, HDR content will look either over-saturated or washed-out.

This is expected from an ‘HDR’ display at this price range. Even some ultrawides which are double the price have similar HDR image quality.

You can just ignore its HDR support as it doesn’t really increase the monitor’s price and it shouldn’t be a deciding factor in whether you should buy it or not.

What’s important is that the standard image quality (SDR) is excellent.

You get accurate and consistent colors with crisp details thanks to the high pixel density while the ultrawide format boosts the immersion in games and movies, and improves your productivity with all the extra horizontal screen space.

Make sure you’ll be able to run your favorite games at the desired frame rate at 3440×1440 though, as it can be quite demanding. Also, check for the 21:9 ultrawide format compatibility; otherwise, you’ll play with black borders at the sides.

There are three fully-customizable picture profiles, an sRGB mode, Picture in Picture/Picture by Picture, and advanced image adjustment tools such as gamma, grayscale, and 6-axis hue/saturation.

To access and navigate the OSD (On-Screen Display) menu, there are four hotkeys (plus a power button) placed at the back of the monitor, at the right side.

Lastly, note the Acer XV340CKP flat-screen ultrawide gaming monitor has a flicker-free backlight and an integrated low-blue light filter for a comfortable viewing experience even after prolonged use.

The monitor boasts a slim design with ultra-thin bezels at the top and at the sides of the screen while the stand offers a good range of ergonomics including 150mm height adjustment, 360° swivel, -5°/35° tilt, and 100x100mm VESA mount compatibility; the screen has a matte anti-glare coating which eliminates reflections without making the picture grainy.

The Acer XV340CKP goes for ~$450 which is a bit expensive. For the same price, you can get the newer Gigabyte M34WQ with a wide color gamut and higher brightness.

A curved alternative such as the LG 34GN850 costs twice as much, but it also features an ever wider color gamut and a noticeably faster response time speed.

The AOC CU34G2X offers deeper blacks for a more immersive viewing experience, especially in a dark room. However, VA models have slower response time speed which results in noticeable dark smearing in fast-paced games, mainly in darker scenes. Some units of the CU34G2X also have the FreeSync brightness flickering issue.

All in all, the Acer Nitro XV340CKP is a decent gaming monitor, however, there are newer models that offer a better experience for the same price.