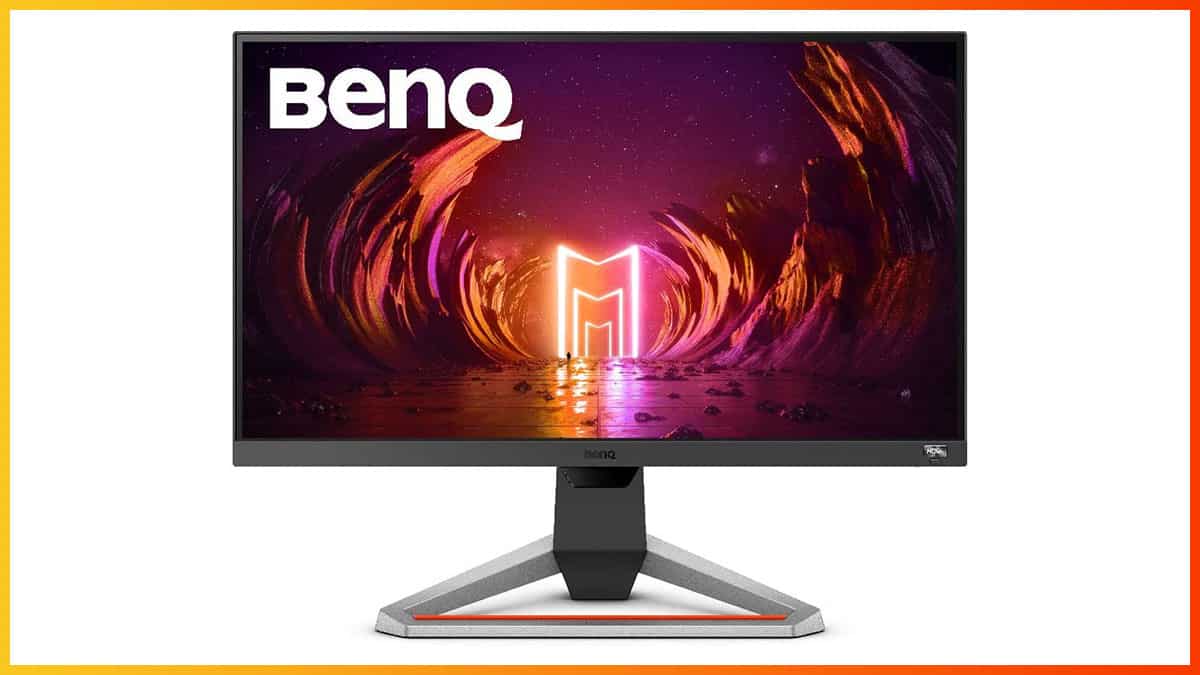 The BenQ EX2510 is a 24.5″ 1080p 144Hz gaming monitor based on a fast IPS panel with FreeSync and MBR support as well as plenty of extra features including an ergonomic stand, built-in speakers, and a light sensor. However, but there are a lot of great alternatives worth considering at this price range too.

The EX2510 from BenQ’s new MOBIUZ series is a 1080p 144Hz IPS gaming monitor that aims to deliver smooth performance paired with accurate and vibrant colors at an affordable price.

Additionally, it offers plenty of extra features such as FreeSync, MBR, an ergonomic design, integrated speakers, HDR, and a light sensor.

As a result, you get accurate and consistent colors that will stay flawless regardless of the angle you’re looking at the screen thanks to the 178° wide viewing angles of the IPS technology.

Moreover, a 400-nit peak brightness is more than enough even for well-lit rooms, so you’ll definitely need to reduce the luminance of the display down from the maximum.

Next, a static contrast ratio of 1,000:1 is standard for IPS monitors. You won’t get as deep blacks as those of VA displays with a ~3,000:1 contrast ratio, but the VA technology has disadvantages of its own.

Basically, you get plenty of screen space while the details are crisp and not pixelated as they would be on a larger screen with the same resolution.

Another advantage of the 1080p resolution is that it’s not very demanding.

So, you’ll be able to enjoy the monitor’s high refresh rate with an appropriately high FPS (Frames Per Second) rate even with a decent budget gaming graphics card in most games.

HDR (High Dynamic Range) is supported as well, but due to the monitor’s only standard sRGB gamut as well as low contrast ratio and brightness, HDR content won’t look all that good.

Using the monitor’s HDRi feature, some HDR content might look somewhat better, but this is not the true HDR viewing experience which requires much better display capabilities that are only available in more expensive monitors.

144Hz provides you with significantly smoother motion clarity in video games for a more enjoyable as well as more responsive gaming experience.

The measured input lag of the BenQ EX2510 amounts to only four milliseconds of delay, which means that you won’t be able to feel any delays between your actions and the result on the screen.

Moving on, there are four response time overdrive modes labeled as ‘AMA’ (Advanced Motion Accelerator) ranging from 0 to 3.

For the best pixel transition performance at 144Hz, we recommend setting it to ‘2’, while at lower refresh rates, ‘1’ is the better option. Overall, the response time is fast and there’s no noticeable ghosting behind fast-moving objects.

As it’s the case with all IPS monitors, some IPS glow is present and its intensity varies across different units of the monitor.

The BenQ MOBIUZ EX2510 also supports AMD FreeSync which provides you with a variable refresh rate up to 144FPS that effectively eliminates screen tearing and stuttering as long as you have a compatible graphics card.

Even though the monitor is not officially certified as G-SYNC Compatible by NVIDIA, FreeSync works without issues with compatible NVIDIA cards (GTX 10-series or newer, over DisplayPort).

Alternatively, you can use the Blur Reduction technology. This feature cannot be active at the same time as FreeSync, and you can only enable it if your refresh rate is set to 100Hz or higher.

Blur Reduction uses backlight strobing to reduce ghosting, but it sacrifices some picture brightness in the process.

Unless Blur Reduction is enabled, the backlight of the monitor is completely flicker-free, and there’s a low-blue light filter that can prevent eye strain.

At the back of the monitor, at the right side, there’s a power button, an input source hotkey, and a joystick for navigation through the OSD (On-Screen Display) menu.

The OSD menu is well-organized; Besides the standard image adjustment tools, there are five gamma modes, pre-calibrated picture presets, Light Tuner, and Black eQualizer which alters the gamma curvature for better visibility in dark scenes.

There’s also the Brightness Intelligence Plus (B.I.+) technology which uses the integrated light sensor of the monitor to adjust the screen brightness according to ambient lighting.

Using the HDRi hotkey at the front bezel of the monitor, you can combine HDR and B.I.+, but as we’ve already mentioned, HDR on this monitor is not ‘true’ HDR – meaning that most HDR content will just be over-saturated or washed out.

The design of the monitor has a rather eye-catching orange strip which might not appeal to some users. Luckily, the stand is detachable while the screen has a 100x100mm VESA mount pattern.

Other than that, the stand is quite sturdy and offers a fair range of ergonomics including up to 130mm height adjustment, +/- 20° swivel, and -5°/20° tilt, but no pivot function.

The screen has a 3H matte anti-glare coating which eliminates reflections without adding a grainy effect to the picture, and there’s a cable management hole with an I/O cover.

Both models are available as newer versions, the BenQ EX2510S and EX2710S with a 165Hz factory-overclocked refresh rate, but these are even more expensive and not as good.

Alternatively, there are excellent 27″ 1440p 144Hz IPS displays that sometimes go on sale for $250, such as the Acer XV272U and the HP X27q, which offer better immersion provided you have a good enough GPU.

Another option worth considering is the Acer XB253QGP, which uses the same panel as the EX2510 and goes for $230 on sale.

In truth, the prices of these budget gaming monitors often fluctuate, so if you want to get the best value, it can depend on the sale. If you’re not sure which one to get, feel free to leave us a comment below and we’ll gladly help you pick the model that’s best suited for you.

The BenQ EX2510 is an excellent gaming monitor overall, however, there are better alternatives at this price range, as well as cheaper models that offer a similar gaming experience.