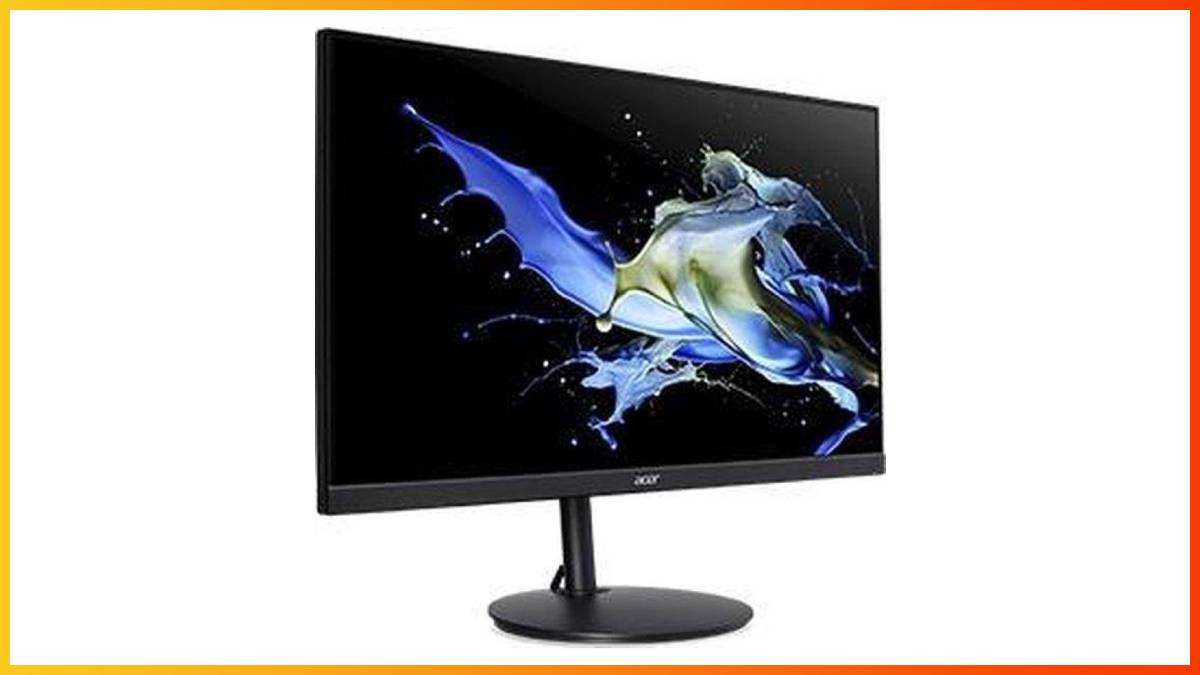 The Acer CB242Y is an affordable monitor with a fully ergonomic design. It offers excellent image quality and smooth performance.

It’s ideal for mixed use including casual gaming, general multimedia use and office-related work.

The Acer CB242Y is an affordable 24″ 1080p IPS monitor with AMD FreeSync and a fully adjustable thin-bezel design.

It’s perfect for casual gaming and entry-level color-critical work as well as other office-related or multimedia use.

Thanks to its IPS panel with 8-bit color depth (with 2-bit dithering) for 16.7 million colors and ~100% sRGB (72% NTSC) color gamut, the Acer CB242Y monitor delivers accurate, consistent and vibrant colors.

In fact, the monitor is even fit for some basic photo editing, although if you are a professional designer, there are better photo-editing displays which might be on the more expensive side, but have more precise factory calibration.

IPS panels also offer wide 178° viewing angles both horizontally and vertically, meaning that the picture won’t degrade when you look at it from skewed angles.

Other panel related specifications of the CB242Y include a static contrast ratio of 1,000:1 and a peak brightness of 250-nits, which is standard for an IPS display at this price range.

Under normal viewing conditions, the monitor gets more than bright enough, and you will likely want to decrease the display’s brightness from the maximum setting.

Now, the contrast ratio is not as high as that of VA panel displays (~3,000:1), so blacks won’t be as deep, but somewhat grayish in comparison with less visible details in shadows.

However, all panel types have their advantages and disadvantages; as such, VA panels don’t have as good color reproduction nor as wide viewing angles. What’s more, they have a notably slower response time speed at this price range.

Lastly, even though 1080p resolution is no novelty, it’s still considered as the standard. It’s not very demanding on your GPU, meaning that you’ll easily be able to maintain high frame rates in games even with a budget GPU.

Plus, it provides a decent pixel density on 24″ monitors, so you’ll have plenty of screen space available as well as sharp and clear details.

On 27″ monitors though, 1080p results in a lower pixel per inch ratio, which makes for a more pixelated image.

Monitor’s pixel response time is the speed at which pixels can change from one color to another or from one shade of gray to another (GtG – gray to gray pixel transition).

Acer didn’t specify the GtG response time speed of the CB242Y, which is actually around 5ms (GtG).

This technology is also known as Motion Blur Reduction. It strobes the backlight to remove the perceived trailing of fast-moving objects for smoother fast-paced motion.

By doing so, it introduces screen flickering (which is invisible to the human eye), and it decreases the monitor’s maximum brightness while active.

Using this feature isn’t necessary as the native GtG response time speed of the CB242Y is fast enough to eliminate any noticeable motion blur and trailing in fast-paced games at 75Hz.

Some users may still prefer to use this feature as it provides CRT-like motion clarity. Note that the monitor needs to be set at 75Hz for this feature to work.

There are three response time overdrive modes, including Off, Normal and Extreme. We recommend using the ‘Normal’ preset as ‘Extreme’ introduces pixel overshoot.

Moving on, the backlight of the monitor is entirely flicker-free regardless of the brightness settings (except when VRB is enabled), and it has an integrated low-blue light filter.

The Acer CB242Y input lag amounts to only ~9ms, which makes for imperceptible delay at 75Hz.

One thing to keep in mind about IPS panels is IPS glow. This is an excepted drawback of this panel technology. Basically, as excess light passes through the panel, there can be visible ‘glowing’ around the corners of the screen.

IPS glow is manageable as it’s only visible in dim-lit environments when the monitor is displaying particularly dark content. To reduce the IPS glow, you can add some ambient lighting to the room or lower the monitor’s brightness.

The OSD (On-Screen Display) menu of the monitor is well-organized and easy to work with thanks to the joystick placed at the back of the monitor. There are three additional hotkeys for shortcuts and a power button.

You will find numerous picture adjustment tools besides the standard contrast, brightness and RGB color settings, including the advanced gamma, grayscale and 6-axis hue/saturation options.

Gaming features include Black Boost for better visibility of objects in shadows and Refresh Rate Num to keep track of the monitor’s refresh rate.

The main gaming feature of the Acer CB242Y IPS monitor is AMD FreeSync, which allows the monitor to change its refresh rate according to GPU’s frame rates if you have a compatible graphics card by AMD or the Xbox One.

Because the monitor doesn’t have a DisplayPort input, you cannot use FreeSync with NVIDIA cards.

FreeSync eliminates all screen tearing and stuttering as long as your FPS (Frames Per Second) is within the VRR (variable refresh rate) range of the monitor, which amounts to 48-75Hz over HDMI.

Below 48FPS, FreeSync stops working until your FPS recovers. Using CRU (Custom Resolution Utility), you may be able to extend the Acer CB242Y FreeSync range to ~40-75Hz though this will vary between different units of the monitor.

Note that FreeSync cannot be active at the same time as VRB or the Extreme response time overdrive option.

The design of the Acer CB242Y is excellent, considering the price. You get full ergonomic support including up to 120mm height adjustment, 360° swivel, 90° pivot, -5°/20° tilt and 100x100mm VESA mount compatibility.

Further, the monitor has ultra-thin bezels making it ideal for multi-monitor setups, and it has a matte anti-glare coating, which effectively eliminates reflections.

Connectivity options aren’t as generous, though. There’s one HDMI 1.4 port and one VGA input.

The Acer CB242Y price ranges from $110 to $130, which is excellent value for the money. It’s our top recommended budget monitor for office use.

In case you have an NVIDIA card and want to use FreeSync, check out the Acer CBA242Y A variant with DisplayPort or the ASUS VA24DQ with a DisplayPort input, but a tilt-only stand.

The Acer CB242Y is an all-around solid monitor for the price. However, if you’re looking for a monitor mainly for gaming, be sure to check out the 144Hz display mentioned above.