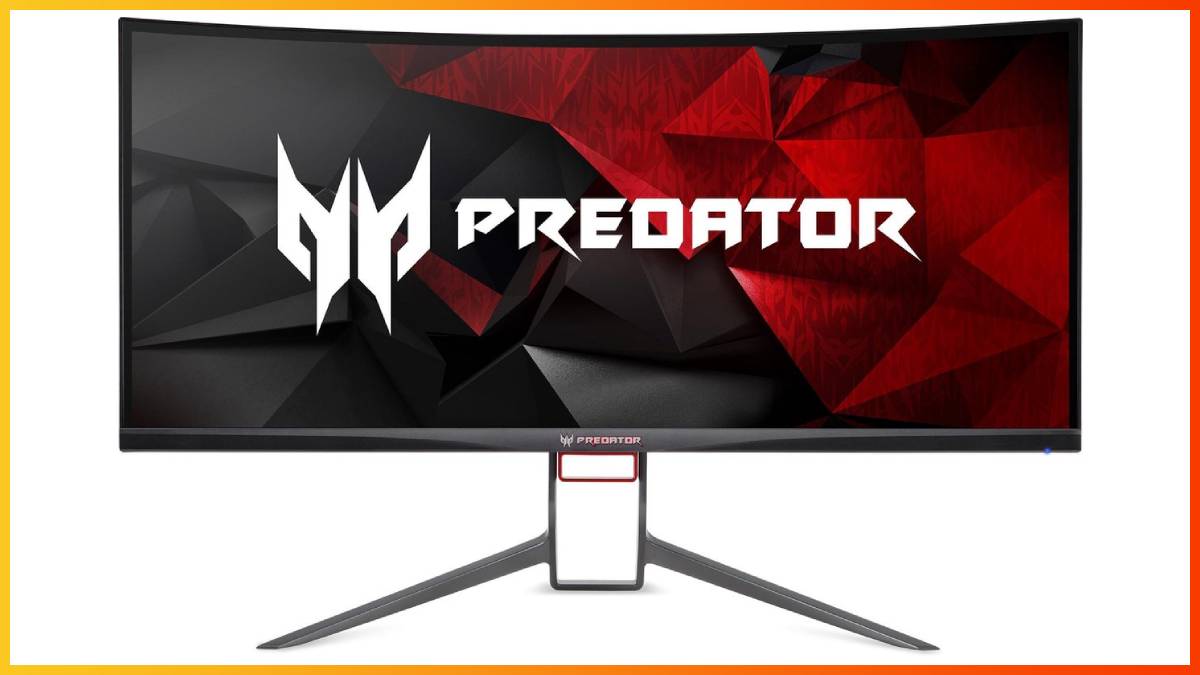 The Acer Predator X34P is an overall great monitor for gaming thanks to its smooth performance, vibrant image quality, and useful features.

Its G-SYNC module, however, significantly increases the price which is why we recommend considering a FreeSync equivalent instead.

The Acer Predator X34P is a popular ultrawide curved gaming monitor. It offers a high 1440p ultrawide resolution and an IPS panel for stunning detail clarity and color vibrancy.

Now, the full name of this model is Acer Predator X34 Pbmiphzx.

Besides the refresh rate, there are some differences in the design as well.

The Acer X34P has a steeper screen curvature of 1900R as opposed to the subtle 3800R curve of the Acer X34. Moreover, unlike the original X34, the design of the X34P also includes the ability to swivel the screen to the left/right.

Additionally, 3440×1440 UWQHD resolution hits the pixel density sweet spot of 110 pixels per inch on the 34″ screen of the Acer X34P. This means that you get a lot of screen space, as well as clear details without any scaling needed.

IPS panels also have wide 178-degree viewing angles, so the image will be ideal no matter the angle you’re looking at the screen.

Other panel-related specifications include a 300-nit peak brightness and a static contrast ratio of 1,000:1, which is standard for a high refresh rate/high-resolution IPS ultrawide display at this price.

There are 34″ 3440×1440 100Hz models with a higher contrast ratio of ~3,000:1 which allows them to produce much deeper black shades, but these variants, such as the AOC CU34G2X, have more ghosting and smearing in fast-paced games due to the slower response time of their VA panels.

The Acer Predator X34P IPS ultrawide monitor, on the other hand, has a faster response time speed (4ms GtG), which is sufficient to eliminate virtually all trailing of fast-moving objects.

Moving on, the Acer X34P input lag amounts to ~5ms, which makes for no perceptible delays between your actions and the result on the screen.

In addition to its quick response time and high refresh rate, the gaming performance is buttery smooth and without any visual artifacts.

NVIDIA G-SYNC can further enhance the performance by synchronizing the monitor’s refresh rate to the GPU’s frame rate. A compatible graphics card by NVIDIA is necessary for this technology.

The synchronized, or variable, refresh rate ranges from 30Hz up to 120Hz on this monitor. So, there will be no screen tearing nor stuttering visible with minimal input lag penalty (~1ms) up to 120FPS.

Turning to the bad things about the screen, the two main things users complain about is the IPS glow and visible scanlines.

IPS glow is an expected drawback of the IPS technology; As excess light passes through the panel, there is apparent glowing around the edges/corners of the screen.

The amount of the visible glow varies between individual units of the Acer X34P, so you might get a unit with unbearable IPS glow in which case you can return it, or you can get a unit which has next to none IPS glow. Hence the term panel lottery.

Our unit had a tolerable amount of IPS glow and backlight bleeding, and the newer Acer X34P supposedly has better quality control than the previous generation Acer X34 and ASUS PG348Q models. Learn more about IPS glow and how to reduce it.

As far as the issue with scanlines is concerned, the panel lottery comes into play again. Some units will have pronounced scan lines (alternating dark and light horizontal lines) while G-SYNC is enabled and/or when the monitor is overclocked to 120Hz.

This problem is present in many G-SYNC monitors, especially the 34″ 3440×1440 ultrawide models. For the most part, the issue is tolerable as to notice it, you have to really look for it, and it’s only bothersome when looking at it from up close – excluding the extreme scenarios of defective panels in which case you can RMA the display. 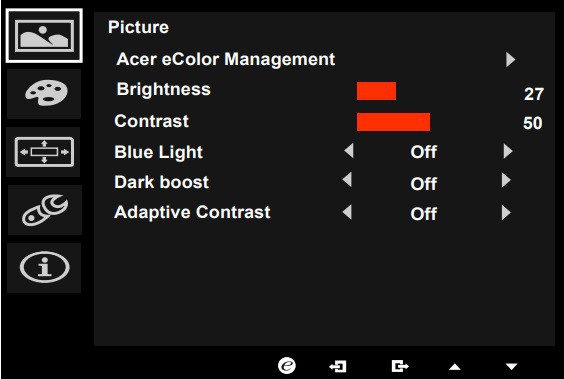 Note that the Acer Predator X34P G-SYNC gaming monitor does not feature ULMB (Ultra Low Motion Blur), which is sometimes included with G-SYNC models. This is not a big downside as the monitor has no issues with motion handling anyway.

There are three overdrive options available, including Off, Normal, and Extreme, but the Normal setting works best as Extreme introduces pixel overshoot.

In the OSD (On-Screen Display) menu, you will also find three customizable picture profiles and the advanced 6-axis and gamma picture adjustments.

The backlight of the monitor is flicker-free, and there’s a low-blue light filter so you can game four hours without straining your eyes.

There’s also the Ambient Light RGB technology, which consists of 10 LEDs placed beneath the bottom bezel for atmospheric lighting. You can customize the lighting with seven different colors and four different glowing patterns.

The Acer Predator X34P boasts a high-quality design with a sturdy metal stand and versatile ergonomics, including up to 130mm height adjustment, -5°/35° tilt, +/- 30° swivel, and 100x100mm VESA mount compatibility.

The Acer Predator X34P is usually priced at around $800, which is a fair price.

However, we recommend checking out the newer LG 34GP83A, which can be found at a similar price. It uses a faster Nano IPS panel with a wider color gamut and HDR support.

If you’d like a similar IPS ultrawide, but cannot afford these models, check out the LG 34GL750 with a lower 2560×1080 resolution.

All in all, the Acer Predator X34P is an excellent gaming monitor, and you will undoubtedly enjoy its stunning image quality and smooth performance.

The previous Acer X34 used to be one of the best gaming monitors available in its time, and the X34P model has only improved on it.

Nowadays, however, there are newer models that offer better value for the price.