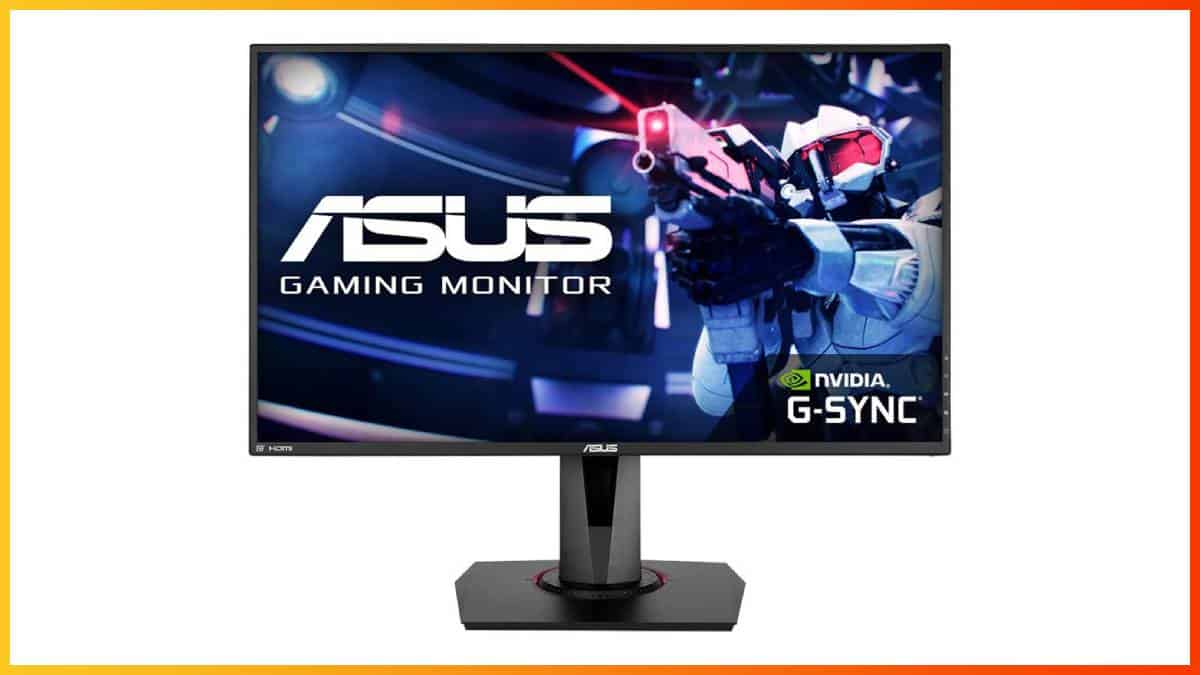 The ASUS VG278Q is a 1080p 144Hz 1ms gaming monitor with certified G-SYNC Compatbility and Motion Blur Reduction. Moreover, it has a fully ergonomic design and plenty of useful gaming features. However, due to its high price and TN panel, we recommend going with a newer IPS model.

If you want a gaming monitor that has as many useful features for competitive gaming as you can get, you’re going to love the ASUS VG278Q.

Plus, it’s got a fully ergonomic design as well as additional gaming features such as customizable crosshairs, gaming presets, etc.

When it comes to image quality, you won’t be exactly blown away by the ASUS VG278Q.

It has a TN panel, which means you get an inferior picture quality in comparison to other panel technologies as well as the narrow 160°/170° viewing angles.

If you’re a hardcore FPS gamer, that shouldn’t bother you as in return you get flawless performance.

Another thing users may not like about the ASUS VG278Q gaming monitor is its 1080p resolution.

By itself, 1080p is not all that bad, it’s still considered as the standard, and more importantly, it’s easy on your GPU, which allows you to reach high frame rates.

However, when you put it on a 27″ monitor, you get a low pixel-per-inch ratio, which results in a pixelated picture.

In video games, this is not a big issue as you can apply some anti-aliasing; what’s more, due to the pixelated image, your precision is a little bit increased as everything is ‘bigger.’

So, it’s only when it comes to films and office-related tasks that the smudgy details of the ASUS VG278Q really become bothersome.

The ASUS VG278Q input lag performance is on par with the gaming monitors professionals use as it amounts to around 4ms.

Moreover, the 1ms response time speed ensures a rapid pixel transition from one color to another, which eliminates ghosting/trailing and motion blur in fast-paced games.

You can also use the TraceFree (overdrive) feature to increase/decrease the response time though we wound it sufficient at the default setting (60); it ranges from 0 to 100 in 20 increments.

Alternatively, you can use ASUS Extreme Low Motion Blur (ELMB), which via backlight strobing further removes ghosting and trailing. You can set this feature at either 120Hz or 144Hz fixed refresh rate.

Note that the maximum brightness of the monitor is reduced when this feature is enabled, so use it only when playing fast-paced games – given that you like this type of motion handling.

Either way, thanks to the 144Hz refresh rate and 1ms response time of the ASUS VG278Q 27″ monitor, you’ll certainly have a blast in fast-paced competitive games if you’re coming from a 60Hz display.

In addition, if you have an Adaptive-Sync compatible graphics card by AMD or NVIDIA (GTX 10-series, RTX 20-series, or newer), you can enable FreeSync or G-SYNC respectively.

The adaptive-sync technology provides you with a variable refresh rate, which allows the ASUS VG278Q to change its refresh rate according to the GPU’s frame rate, thus eliminating screen tearing and stuttering for good.

The variable refresh rate range is 40-144Hz over DisplayPort for both FreeSync and G-SYNC, and 40-120Hz for FreeSync over HDMI.

Back in the day, it was the first 1080p 144Hz 1ms monitor with certified G-SYNC compatibility, so the high price made some sense.

Nowadays, however, you can get a cheaper 1080p 144Hz 1ms IPS gaming monitor, such as the LG 24GN650, which is just as fast, but offers much better image quality and viewing angles.

In short, the ASUS VG278Q offers smooth performance and plenty of useful features, but it’s simply too expensive given that there are cheaper 240Hz and 144Hz 1ms IPS models.