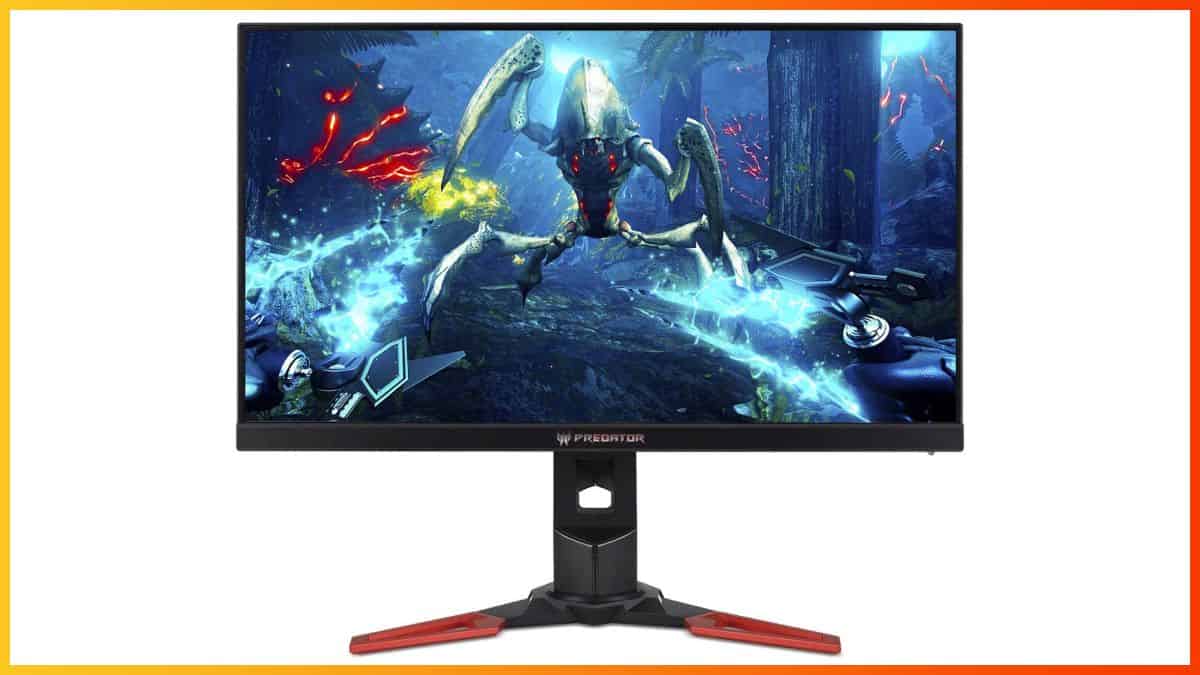 The image quality is stunning as well though calibration is required. Versatile design and extra gaming features are a nice addition as well.

The Acer Predator XB271HU bmiprz is a premium gaming monitor that combines a 144Hz refresh rate (overclockable to 165Hz) and a 1440p IPS panel with NVIDIA G-SYNC technology for a perfect gaming experience.

Alas, the monitor isn’t factory-calibrated, so for the best Acer Predator XB271HU calibration settings, you will have to fiddle with the color adjustments yourself. Advanced 6-axis and RGB color settings are available in the OSD (On-Screen Display) menu.

Many find 27″ screen size and 1440p resolution to be the ideal combination for gaming. The monitor isn’t too big nor too small, while the resolution provides just the perfect pixel density.

With 108.79 pixels per inch, you get maximum details and screen real estate without any UI scaling required.

The main complaint you may see about the Acer Predator XB271HU 27″ monitor is its IPS glow and backlight bleeding. These two similar but different monitor defects show as excessive light leaking around the corners or edges of the screen.

We didn’t see any prominent backlight bleeding nor any dead pixels on our unit. IPS glow, on the other hand, is expected from IPS panels.

Moving on, the Acer Predator XB271HU input lag performance is top-notch with less than 5ms of delay. The response time is also impressively fast as it effectively removes almost all ghosting and motion blur in fast-paced games.

Now, the response time isn’t as fast as that of TN panel displays with 1ms, nor is the contrast as high as it’s on VA panel monitors; but these panels have their own drawbacks.

Moreover, blacks won’t be as deep as they’re on VA displays, but then again, you won’t get the horrible black smearing you get on VA monitors at this price range.

Nowadays, there are faster IPS monitors available too, such as the LG 27GL83A.

This will allow the display to change its refresh rate dynamically and in synchronization with the GPU, which will eliminate screen tearing and stuttering for good.

Moreover, it won’t introduce as much input lag as VSync does; in fact, the Acer Predator input lag is just 1ms higher with G-SYNC enabled.

Alternatively, you can use ULMB (Ultra Low Motion Blur), which via backlight strobing completely eliminates motion blur and ghosting of moving objects in video games.

ULMB cannot be active at the same time as G-SYNC as it can only work at fixed refresh rates of 85Hz, 100Hz, or 120Hz.

When ULMB is enabled, the screen becomes a bit dimmer without the ability to increase its brightness, and input lag gets increased a bit to ~10ms, which is still imperceptible.

You can use the Acer XB271HU with an AMD card as well, but you won’t be able to benefit from variable refresh rate nor ULMB.

In case you have an AMD card, get a 27″ 1440p 144Hz IPS monitor with FreeSync instead, so you don’t pay a premium for G-SYNC for no purpose.

The XB271HU, as well as the rest of the Acer Predator XB1 series monitors, offer additional gaming features, including Dark Boost, which you can use to alter the gamma curvature and increase visibility in dark parts of video games.

Next, you can set a custom Aim Point on-screen for better precision in FPS games and track your framerates/refresh rates with the Refresh Rate Num feature. There are also three customizable picture profiles.

The screen is flicker-free unless ULMB is enabled, and there’s an integrated low blue light filter that prevents eye strain and fatigue.

Finally, you will find the Overdrive settings with Off, Normal, and Extreme modes. We suggest using either Off or Normal as Extreme introduces pixel overshoot or inverse ghosting.

The design won’t appeal to everybody due to gamer-inspired aesthetics. It’s a tad bulky looking at it from the side, but at least the bezels are very thin at the top and at the bottom of the monitor, so it’s a great choice for multi-monitor setups.

The Acer Predator XB271HU price amounts to around $700, which is way too expensive. A more realistic price, worth considering, would be about $400.

ASUS offers a similar model based on the same panel, the ASUS PG279QZ, which can be found for less (~$600).

However, if you want a good 27″ 1440p 144Hz IPS gaming monitor, we highly recommend checking out the LG 27GL850, which is not only cheaper but also faster and offers a wider color gamut.

Although the LG 27GL850 doesn’t have a G-SYNC module, it supports FreeSync, and it’s G-SYNC compatible.

The Acer XB271HU was one of the best gaming monitors available back in the day. Nowadays, you can find equally good or even better alternatives for less money, such as the LG 27GL850.