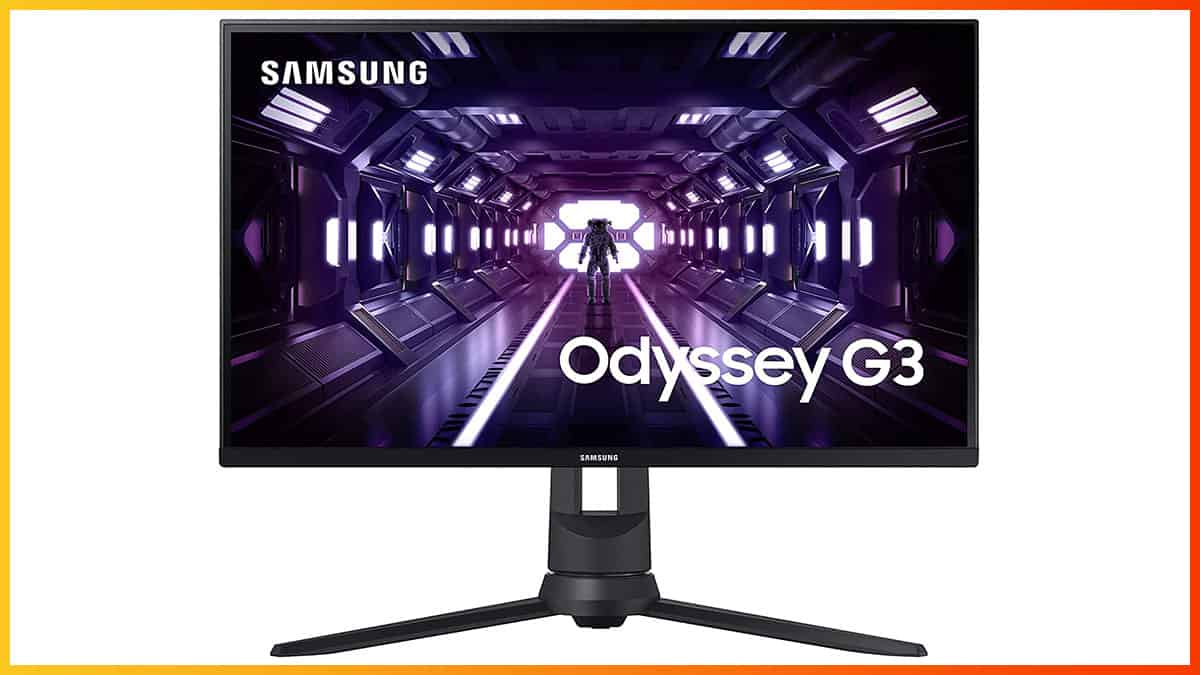 The Samsung F24G35T delivers an immersive image quality with deep blacks. Additionally, it supports AMD FreeSync, MBR, and has a fully ergonomic stand. However, it’s quite expensive for its specifications and offers subpar response time performance.

Note that the full model name is Samsung LF24G35TFWNXZA and that the models with F24G33T and F24G34T names are identical to the F24G35T; it’s just regional suffix.

Most VA panel gaming monitors have curved screens, which a lot of users don’t like as the curvature really isn’t necessary on 24″ – 32″ monitors, unlike it’s the case with ultrawide displays.

Still, some people detest even the mild screen curvature on 24″ monitors, which is where the Samsung F24G35T comes in.

This new generation of flat-screen VA panels also brings improved contrast ratio of ~4,000:1. Even though Samsung specifies a maximum contrast ratio of 3,000:1 for the F24G35T, it goes beyond 4,000:1. Other monitor manufactures using the same panel actually specify a 3,500:1 or 4,000:1 contrast ratio for their models.

As a result, you get deep and inky blacks for an immersive viewing experience, especially when watching dark scenes in a dark room.

The peak brightness amounts to 250-nits, which is fine under normal lighting conditions, but if you’re using the screen in a really bright room without any blinders or curtains, it might be too dim to mitigate glare even at its maximum brightness setting. Depending on the unit though, the F24G35T is capable of reaching even a bit beyond 300-nits.

Next, the Samsung F24G35T monitor supports 8-bit color depth without dithering and covers ~99% of the sRGB color space.

You lose on the extra color vibrancy provided by wide color gamut that’s available on some similarly priced gaming monitors, but the colors are still rich and not over-saturated when watching sRGB content (most games and web content).

The Full HD resolution results in a decent pixel density of ~92 PPI (pixels per inch) on the 23.8″ viewable screen of the Samsung F24G35T display.

This means that you get a good amount of screen real estate and reasonably sharp details and text. Obviously, you won’t get as much screen space and detail clarity you’d get with a higher resolution display, but the image also won’t be as pixely as it would be on a 27″ 1080p monitor.

Gamers were hoping to see similar performance on the cheaper Odyssey G5 series as well, but unfortunately, that wasn’t the case.

The Odyssey G3 series is even worse in this regard as the pixel response time speed is actually a step down from last-generation budget 1080p VA monitors.

There is visible ghosting behind fast-moving objects, especially in dark scenes due to the slow rise times (dark into bright pixel transition).

For everyday use and casual gaming, the amount of ghosting is tolerable or even negligible, depending on how sensitive you are to these visual artifacts, but for competitive fast-paced games, we highly recommend considering another gaming monitor; there are much better options at this price range.

There are only two response time overdrive modes: on and off. Setting it to ‘On’ has a bit better results, but still far from perfect.

Input lag performance, on the other hand, is very good at ~4ms of delay, which is not perceptible.

You can improve motion clarity a bit by enabling the MPRT option in the OSD (On-Screen Display) menu.

MPRT is a Motion Blur Reduction technology that uses backlight strobing to reduce perceived motion blur at a fixed refresh rate of 85Hz or higher.

However, it introduces flickering (though invisible to the human eye), reduces picture brightness, and can’t be active at the same time as variable refresh rate.

While fast-paced motion is clearer, the image is darker and there’s still some ghosting noticeable, as well as duplicate images. Further, people sensitive to flickering might get headaches after prolonged use of this feature.

Moving on, in comparison to most curved VA panel monitors, the viewing angles are a bit better on the Samsung F24G35T. Some brightness/contrast shift is noticeable when looking at the screen at an angle, but it’s not bothersome.

The monitor supports AMD FreeSync with a 48-144Hz variable refresh rate (VRR) range for tear-free gameplay up to 144FPS if you have a compatible GPU.

While it’s not officially certified as G-SYNC Compatible by NVIDIA, you can use FreeSync with compatible GeForce cards over DisplayPort too.

However, brightness flickering is noticeable with unsteady frame rates and around the LFC (Low Framerate Compensation) threshold.

As long as MPRT is not enabled, the backlight of the Samsung F24G35T is flicker-free.

For navigation through the OSD menu, there are four hotkeys at the rear of the monitor, above the power button.

The menu is fairly easy to use, but it’s missing some features besides the standard image adjustment tools, such as brightness, contrast, aspect ratio, and input source selection. For instance, there’s no Black Equalizer.

Further, the screen has a matte anti-glare coating that eliminates reflections and it can be detached from the stand for mounting via the 100x100mm VESA pattern.

The C24G1A has a noticeably faster response time speed, a wider color gamut, and a factory-overclocked 165Hz refresh rate. It has a 1500R curved VA panel, but as we said, the curvature is really not that noticeable on ~24″ sized screens.

For the price of the F24G35T, you can also get a 1080p 144Hz IPS gaming monitor for virtually zero ghosting in fast-paced games and flawless VRR performance, such as the LG 24GN650, though you get a lower contrast ratio.

The Samsung Odyssey G3 series also includes a 27″ model, the Samsung F27G35T for ~$50 more, which is also rather expensive considering the specifications and alternatives.

If you really want a flat-screen VA panel monitor, consider the Philips 242E1GSJ or the AOC G2490VX. They use the same (or at least a very similar) panel as the F24G35T, but with wide color gamut support for more saturated colors, and they go for ~$150 – $170, though you still get the same slow pixel response time.

Due to its expensive price and disappointing pixel response time performance, we don’t recommend the Samsung F24G35T. There are better alternatives at this price range.