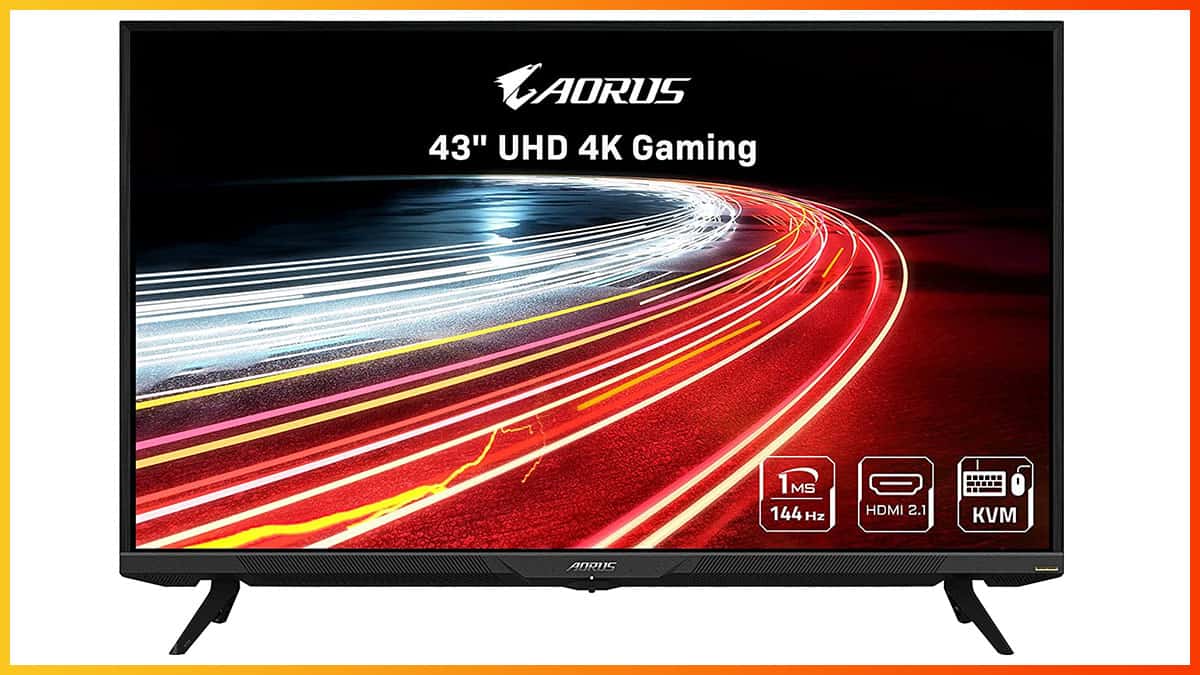 Sadly, common VA panel problems are present, such as minor black smearing behind fast-moving objects in dark scenes and some units are affected by VRR brightness flickering. Further, there are text issues due to the BGR subpixel layout and gray text on black background on the top of the screen appears unclear. Depending on the use-case, these issues might not be bothersome for some users, while deal-breaking for others.

Looking for a large 43″ monitor for gaming? The Gigabyte Aorus FV43U might be just for you!

The monitor is based on a VA panel with a high 4,000:1 static contrast ratio, ensuring deep blacks and vivid details in shadows.

Further, it has a quantum-dot enhanced film layer that boosts its color gamut to 99% Adobe RGB and 97% DCI-P3 color space coverage, which is equivalent to ~150% sRGB gamut size!

As a result, you get rich and vibrant colors! In comparison to the standard 90% – 95% DCI-P3 wide gamut monitors, you get even more shade variety in green, blue and cyan colors.

Should you prefer less saturated colors for better accuracy when viewing sRGB content, there is an sRGB emulation mode that clamps the native ~150% gamut down to ~100%, with adjustable brightness.

Moving on, the Gigabyte FV43U has a high peak brightness of 750-nits, which gets a boost up to 1,000-nits when watching HDR content. The screen is bright enough to mitigate glare even in rooms with strong ambient lighting and you get punchy and vivid details in bright scenes.

There are 8 dimming zones that can dim the screen where the image is supposed to be dark without greatly affecting parts where it should remain bright, thus effectively increasing the contrast ratio.

However, since there are only eight zones on this gigantic 43″ screen with over 8 million pixels, the local dimming implementation is not very effective.

Some scenes with bright and dark objects far apart will look great, but most of the time, local dimming won’t be able to improve the image quality.

Regardless, thanks to the monitor’s high native contrast ratio, strong peak brightness and wide color gamut, HDR content will look very good, just not as good as that of the ‘true’ HDR displays with more complex local dimming solutions, such as the 1152-zone ASUS PG32UQX or the 2048-zone Samsung Odyssey Neo G9. Of course, these displays are a lot more expensive, too.

Another alternative would be an OLED TV or monitor, but at the time of this writing, the smallest size available is 48″, which is too big for most users. While OLEDs offer a better HDR image quality thanks to the infinite contrast ratio and no backlight bleeding, they’re not as bright and have their own downsides, such as the risk of burn-in.

Back to the Gigabyte FV43U, the 4K UHD resolution looks sharp even on 43″ sized screens with 104 PPI (pixels per inch). So, at a normal viewing distance, it will be hard to notice the individual pixels.

The monitor uses a BGR subpixel layout instead of regular RGB, so text will appear somewhat fringy.

It’s not noticeable in games or when watching videos. For desktop use, be sure to set up Windows ClearType properly. Scaling will also make text sharper, but you will lose some screen real estate. This issue affects all 43″ sized monitors/TVs.

The monitor also has an unusual issue with gray text on black backgrounds; it becomes difficult to read when it’s displayed at the top of the screen. Again, you can use scaling, as well as Black Equalizer to alleviate the problem, but at a cost of screen space and contrast ratio. So, if you work with spreadsheets and want to use this monitor without any scaling for maximum screen space, we recommend getting something else.

Now, while Gigabyte claims 178° wide viewing angles for the Aorus FV43U, some shifts in brightness and contrast are apparent when watching the screen at an angle. Even at a normal viewing position, some gamma/saturation shifts can be observed due to the monitor’s big size; this is why most of the big VA monitors are curved.

For gaming and everyday use, this won’t be an issue. However, we don’t recommend the monitor for serious color-critical work.

Input lag is imperceptible, allowing for a responsive gaming experience without any noticeable delays between your actions and the result on the screen.

Next, the pixel response time speed is decent. It’s faster than that of most high refresh rate VA monitors, but some smearing in dark scenes will be noticeable. However, unless you’re a highly competitive FPS player or very sensitive to ghosting, it won’t bother you.

There are five response time overdrive modes: Off, Smart OD, Picture Quality, Balance and Speed. For a fixed 120Hz/144Hz refresh rate, we recommend the Balance mode for the least amount of ghosting at no cost of overshoot.

If you’re using a variable refresh rate and your frame rate is below 100FPS, you should dial it back to Picture Quality in order to prevent inverse ghosting.

The Gigabyte FV43U monitor supports AMD FreeSync Premium Pro with a 48-144Hz VRR (variable refresh rate) range for tear-free gameplay up to 144FPS. While it’s not officially validated by NVIDIA as ‘G-SYNC Compatible’, VRR works with NVIDIA cards as well.

Sadly, some units are affected by the infamous VRR brightness flickering issue.

MBR (Motion Blur Reduction) is supported as well with Gigabyte’s Aim Stabilizer Sync implementation that allows it to work at the same time as VRR. This technology uses backlight strobing to reduce perceived ghosting at a cost of picture brightness.

Beneath the bottom bezel, there’s a joystick for quick and easy navigation through the OSD (On-Screen Display) menu.

Other supported features include Picture in Picture, Picture by Picture, a built-in KVM switch, OSD Sidekick (desktop application for OSD menu features) and Dashboard (allows you to track GPU/CPU temperature, utilization, etc. on the screen).

The stand of the monitor is sturdy and while it has no ergonomic adjustments, it is 200x200mm VESA mount compatible.

Unlike most monitors with a matte anti-glare finish, the FV43U has a semi-gloss coating. So, it’s a bit more reflective, but the image quality is more vivid. Thanks to the monitor’s high peak brightness, it will be able to combat glare in well-lit rooms.

Note that the HDMI 2.1 ports on this monitor have a limited 24 Gbps bandwidth and rely on DSC (Display Stream Compression) for 4K 144Hz with 10-bit color depth and full 4:4:4 color format.

This isn’t an issue for PC and Xbox gamers with HDMI 2.1 hardware, but if you have the PS5, you will be limited to 4K 120Hz with 4:2:0 chroma subsampling.

Since the HDMI 2.1 ports of the PS5 are limited to 32 Gbps, you are forced to use 4:2:2 chroma subsampling anyway, but you will have to further drop it down to 4:2:0 on the Gigabyte FV43U. This type of compression mainly causes text on colored backgrounds to appear a bit smudgy, so it’s not a big issue for gaming.

The Gigabyte FV43U goes for ~$1,000, which is reasonable considering that other 43″ gaming monitors are either similar or worse yet more expensive.

Around this price range, you might also want to check out the Samsung Odyssey G9, the MSI MPG321UR-QD and the LG OLED48CX/C1.

In 2022, LG will release the 42″ OLED TV, so you may want to consider waiting for it in case the 48″ variant is too big for you. Of course, OLEDs also have their disadvantages, such as the risk of burn-in, ABL and lower peak brightness in comparison to LED LCDs.

While the Gigabyte Aorus FV43U has its disadvantages, it’s the best option available if you’re looking for a 43″ 4K 144Hz gaming display.

Due to its BGR subpixel layout, gray on black background text issue and narrow viewing angles, it’s not recommended for office-related or color-critical use.

For gaming and content consumption, these issues aren’t nearly as bothersome and you can enjoy the monitor’s deep blacks, bright highlights and gorgeous colors as well as responsive gameplay thanks to 144Hz.

As expected from a VA panel, some dark level smearing is present and some units suffer from VRR brightness flickering, so if you’re sensitive to these visual artifacts, you should consider something else.