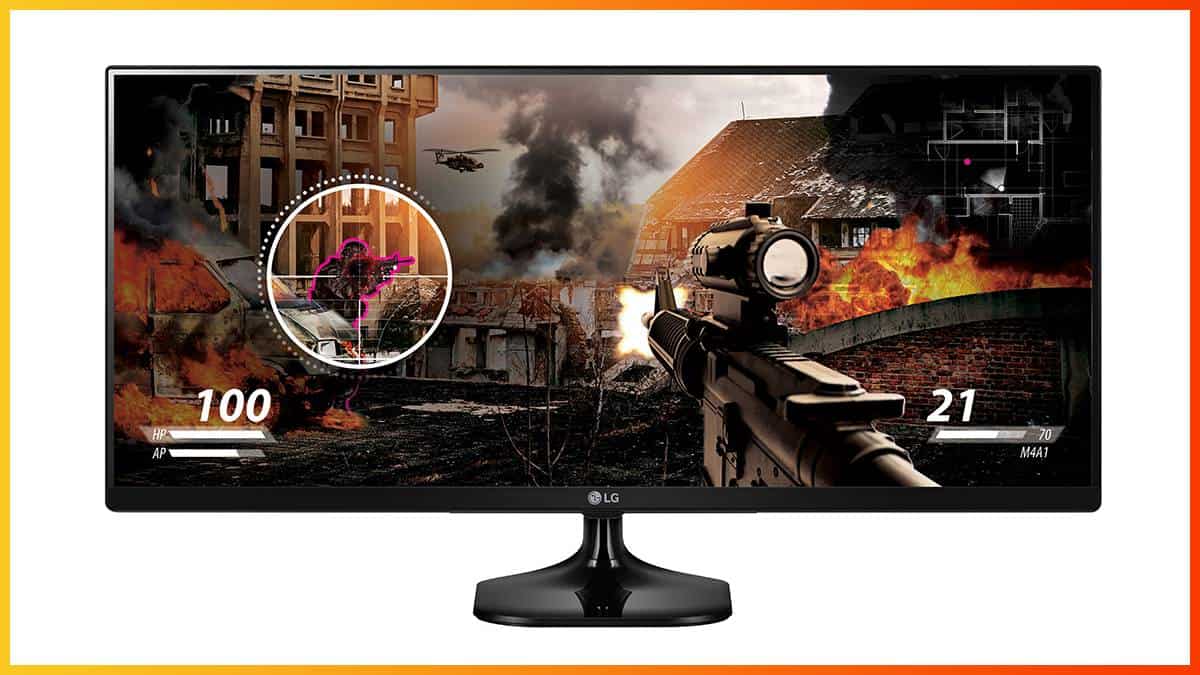 The LG 25UM58 is an excellent monitor for its price. Thanks to its high resolution (for its size, at least) and IPS panel, it offers vivid colors and crisp details as well as wide viewing angles and quick response time.

The only thing it’s really missing is AMD FreeSync and a DisplayPort input.

Update: It seems that the newer versions (refreshes) of this monitor do support AMD FreeSync, though it’s not clear from which firmware/manufacturing date exactly.

The LG 25UM58 is an affordable ultrawide display with stunning colors and eye-catching detail clarity.

Right off the bat, you should keep in mind that the LG 25UM58-P is quite a small display.

However, such small screen size has its advantages. With a screen resolution of 2560×1080, you get a rich pixel density of 111.14 pixels per inch which makes for plenty of screen space and sharp details without any scaling necessary.

Plus, the LG 25UM58 monitor is based on an IPS panel with 8-bit color depth (16.7 million colors), wide 178-degree viewing angles, and over 99% sRGB color space coverage, which ensures accurate, consistent, and vibrant color quality.

Other specifications include a 250-nit peak brightness and a static contrast ratio of 1,000:1 which is standard for a display at this price range.

Overall, you get a stunning viewing experience, especially when watching movies as the 21:9 aspect ratio is close to the aspect ratio many movies are natively shot at (2.35:1).

In video games that support the ultrawide format, you get a wider field of view for a more engaging gaming experience. However, in video games that don’t support 21:9, you will have to choose between black borders or a stretched-out picture.

The LG 25UM58 also offers a smooth performance. It has a very low input lag of ~9ms, so you won’t notice any delays when playing video games.

Moreover, the response time speed (the speed at which pixels change from one color to another) amounts to only 5ms which is sufficient to eliminate trailing of fast-moving objects.

The 75Hz refresh rate provides a small but noticeable boost in motion clarity in comparison to the standard 60Hz displays, however, the monitor lacks AMD FreeSync which would provide a variable refresh rate for compatible GPUs.

Note that the LG 25UM58 ultrawide monitor has a flicker-free backlight and a low-blue light filter which ensures a comfortable viewing experience without the risk of eye strain or headaches after prolonged use of the display.

Moving on, the LG display offers plenty of useful features including On-Screen Control which allows you to adjust all of the OSD (On-Screen Display) settings in a desktop application with your mouse/keyboard.

Additionally, you will find Screen Split which divides the screen into partitions for easier multitasking.

Standard alterations such as brightness/contrast, sharpness, color temperature, 6-axis, and gamma (three presets) are available as well, of course.

The LG 25UM58 has a tilt-only stand, so you cannot adjust the height of the screen. However, there are 75x75mm holes for VESA mount, so you can attach the monitor to a third-party stand.

Connectivity options include two HDMI 1.4 ports and a headphones jack. There are no built-in speakers nor USB ports.

While the screen has very narrow bezels, there’s a black border around the display which is standard for these “bezel-less” displays. The screen also has an anti-glare coating which effectively eliminates reflections.

The LG 25UM58 price amounts to only around $160 which makes it the cheapest ultrawide monitor. For the price, you get a stunning image quality and performance.

If you can afford something a bit pricier, we recommend having a look at the LG 29WK600 which is a 29″ IPS ultrawide screen with the same resolution.

With the 29WK600, you get a slightly lower pixel density (though still a decent 96 PPI density), but you also get AMD FreeSync, a DisplayPort input (allowing FreeSync to be used with compatible NVIDIA cards), entry-level HDR, and built-in speakers.

For more similar monitors, be sure to check out our best ultrawide monitors buyer’s guide.

In case you are on a limited budget, but would like an exotic display with an excellent image quality and smooth performance, the LG 25UM58 is a great choice.

Competitive gamers, especially those who are mainly playing FPS titles, should get a 144Hz gaming monitor instead.