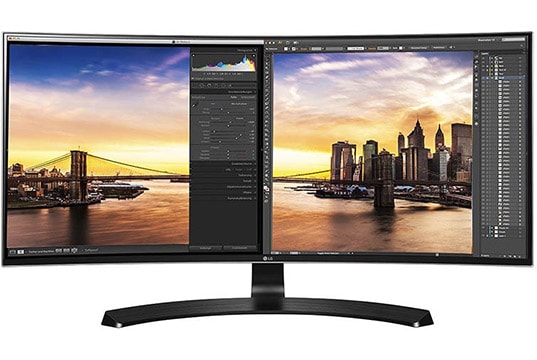 The LG 34UC80 is an affordable 34″ 3440×1440 IPS curved monitor that’s good for gaming, watching movies, and content creation. For AMD users, FreeSync up to 75Hz is a nice addition, but the variable refresh rate range is very narrow. NVIDIA users are limited to 60Hz (your mileage may vary) which may be risky and a deal-breaker for some gamers.

For the image quality and performance it offers, its price is pretty attractive, and you get tons of exclusive features, too!

It’s factory-calibrated to cover over 99% of the sRGB color gamut, which makes it a great monitor for photo editing and other color-critical tasks.

Besides ensuring a perfect color accuracy and consistency, the panel delivers 178° wide viewing angles so that the colors won’t shift when viewed from skewed angles, a quick 5ms response time speed which eliminates ghosting of fast-moving objects, a decent 300-nit peak brightness, and lastly, a standard 1,000:1 contrast ratio.

This is the sweet spot between screen real estate and picture detail, meaning that you will have both plenty of workspace as well as sharp and vivid details without scaling.

As movies are natively shot at an aspect ratio that’s closer to 21:9 than 16:9, you also get a more cinematic viewing experience.

While a lot of games support 21:9 natively too, you will have to settle for black bars at the sides or a stretched image in certain games. You check out all the games that support the 21:9 aspect ratio here.

Straight out of the box, the LG 34UC80 IPS display provides an outstanding image quality. We haven’t run into any dead pixels while the backlight bleeding and IPS glow was minimal.

If you have an AMD graphics card with FreeSync, you can synchronize the GPU’s frame rate with the monitor’s refresh rate, which will eliminate screen tearing and stuttering within the variable refresh rate range.

However, the LG 34UC80 FreeSync range is very narrow (55-75Hz), and it only works over DisplayPort.

Furthermore, to use the monitor up to 75Hz with NVIDIA cards, you have to enable FreeSync and create a custom resolution with a 75Hz refresh rate, but on this monitor, frame skipping may occur depending on your particular unit.

Update: FreeSync now works with compatible NVIDIA G-SYNC graphics cards. Our unit worked without issues, and we managed to increase the VRR range to 48-75Hz via CRU.

At 75Hz, gaming is slightly smoother as opposed to 60Hz, and with the Dynamic Action Sync feature enabled, we’ve measured input lag to be only ~10ms.

Motion blur and ghosting are barely visible in fast-paced games; additionally, you can use the Response Time Control feature in the OSD (On-Screen Display) to further eliminate ghosting.

Just like all of modern LG monitors, the LG 34UC80 packs a bunch of useful features for both everyday use and gaming.

The OSD is navigatable using the joystick that’s placed beneath the bottom bezel of the monitor, or you can use the On-Screen Display application and tweak all settings in a desktop application instead.

In addition, you will be able to find the Screen Split feature, which consists of numerous different layouts for easier multitasking by letting you snap an application window to a certain part of the screen.

There are also PiP (Picture in Picture) and PbP (Picture by Picture) modes available.

Besides the common adjustments such as contrast, gamma, brightness, color temperature, etc., there are advanced 6-axis color settings available as well as the Reader mode, which enables the blue light filter for a more pleasant viewing experience at night.

For gaming, there’s the Black Stabilizer feature, which alters the gamma curvature to brighten up objects in dark areas of games.

Furthermore, you can customize your own gaming presets with optimal picture settings or simply use the pre-calibrated RTS or one of the two FPS modes. 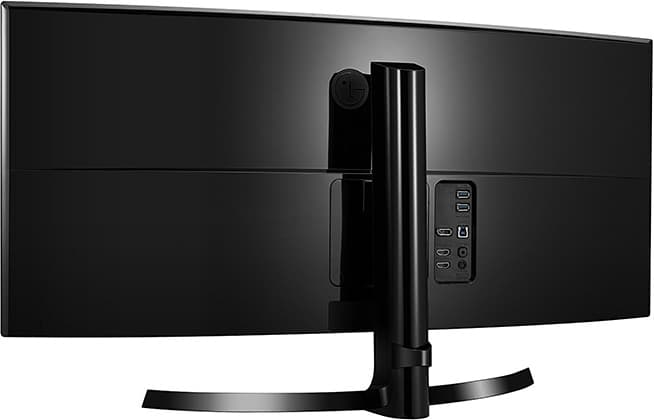 The design of the LG 34UC80 ultrawide monitor is simple and sleek. Ergonomics include -5°/20° tilt, up to 120mm height adjustment, and 100 x 100 holes for VESA mount. The aggressive 1900R curvature is perfect for extra immersion.

When it comes to connectivity, there are two HDMI 2.0 ports, a DisplayPort 1.2 input, a headphones jack, and two USB 3.0 ports.

The USB-1 socket supports fast charging as well though you will have to enable it in the OSD first. When fast charging is enabled, you cannot transfer data to or from the connected device.

If you want an even cheaper 3440×1440 ultrawide monitor, check out the Samsung S34J550W, which has a VA panel with a higher contrast ratio but slower response time speed. It goes for as low as $400.

Another cost-effective ultrawide monitor is the MSI Optix MAG341CQ with a 100Hz VA panel.

For the best ultrawide gaming experience, check out the LG 34GK950F with a 144Hz refresh rate, FreeSync 2, and HDR.

If you’re looking for a monitor that excels at pretty much everything for a reasonable price, the LG 34UC80-B won’t disappoint you. Overall, it’s the best 34-inch 3440×1440 IPS curved ultra-wide monitor for the money, especially if you have an AMD FreeSync graphics card.