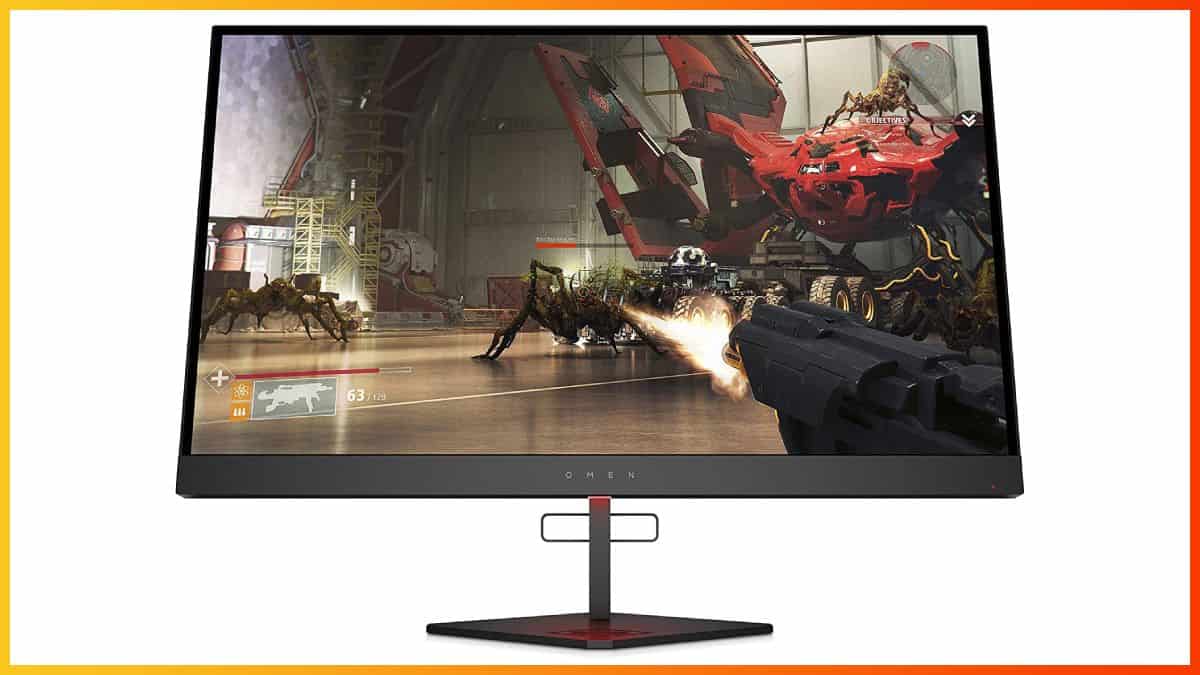 The HP Omen X 27 is the ideal monitor for competitive gaming if you (and your PC rig) have outgrown the low 1080p resolution.

People who enjoy 240Hz gaming can now finally move past the lowly 1080p resolution and revel in crystal-clear details, provided they have the proper PC rig to sustain it.

Alas, the Omen X 27 uses a TN panel, so common downsides such as narrow viewing angles and inferior image quality are still present.

The HP Omen X 27 monitor sports a screen resolution of 2560×1440, which is for most people the ideal resolution for 27″ sized displays.

You get the perfect pixel-per-inch ratio of ~108 PPI (pixels per inch), resulting in vivid and crisp details as well as plenty of screen real estate without having to use any scaling.

If you want to get anywhere near 240FPS, you’ll need a high-end graphics card, and you shouldn’t expect to get such high frame rates in games other than the eSports titles.

While the colors are good for a TN panel display, they are still a far cry from color vibrancy found on equally-priced IPS or VA gaming monitors.

Further, the HP Omen X 27 can accept the HDR10 signal of compatible content, but it lacks proper display capabilities to enhance the viewing experience notably.

HDR content gets a boost in peak brightness up to 400-nits, but the lack of 10-bit color depth, high contrast ratio, and color quality is evident. The display doesn’t even qualify for VESA’s entry-level HDR400 certification.

The backlight of the monitor is edge-lit, and there’s a local dimming solution. However, there are only 16 dimming zones. Enabling local dimming will make blacks a bit darker, but due to the low contrast ratio, there’s an obvious lack of black depth and visibility of details in shadows.

What’s more, since there are only 16 dimming zones, they cannot quite keep up with fast-moving objects, which will introduce noticeable trailing/glowing. So, for fast-paced gaming, make sure local dimming is disabled.

Overall, the image quality isn’t bad. There’s a notable improvement over the older 1440p 144Hz TN models, such as the Dell S2716DG.

However, don’t expect the IPS or VA levels of color and contrast quality due to the monitor’s specified wide color gamut, HDR support, and local dimming features.

These features are a bit misleading and unnecessary, but the image quality is decent for a TN panel, while 1440p ensures crisp details without having to sacrifice CPU/GPU power for anti-aliasing.

While the image quality is a bit better as opposed to the previous-generation TN models, the 160°/170° viewing angles are still a bit of a problem.

As soon as you move and look at the screen from the sides or from below/above, the picture quality degrades. This isn’t a problem if you’re sitting directly in front of the screen, but it’s something you should have in mind.

Moving on, the HP Omen X 27 input lag performance is impressive, with just below 3ms of delay at 240Hz, which is imperceptible.

The response time speed is top-notch as well; you won’t encounter any prominent ghosting or trailing behind fast-moving objects.

There are four response time overdrive modes: Normal, Fast, Faster, Fastest. We recommend using either ‘Fast’ or ‘Faster,’ as ‘Fastest’ introduces a lot of pixel overshoot.

This technology effectively eliminates all screen tearing and stuttering with minimal input lag penalty (1-2ms). FreeSync works without any issues when used with compatible NVIDIA cards, even though the monitor isn’t certified as G-SYNC compatible by NVIDIA.

Note that the HP Omen X 27 display is not flicker-free. It uses PWM (Pulse-Width Modulation) to regulate brightness, and although the flicker is invisible to the human eye, those very sensitive to it may experience headaches after prolonged use.

Next to the power button, you will find four hotkeys for OSD (On-Screen Display) navigation, but no joystick, which we would’ve preferred.

Luckily, HP has the exclusive Omen Command Center application, which allows you to make all the important monitor adjustments there, among other things.

The RGB LED is facing the monitor’s stand, it’s subtle and actually practical, especially in the dark.

For the best image quality, we recommend using the ‘Native’ color temperature mode.

The HP Omen X 27 1440p 240Hz gaming monitor has a fairly slim but sturdy design with ultra-thin bezels. It has a rather aggressive matte anti-glare screen coating, which some users may find too grainy, but it’s tolerable.

Ergonomics include height adjustment up to 130mm, tilt by -3°/23°, and 100x100mm VESA mount compatibility via the provided adapter. You cannot swivel or pivot the screen.

While the Lenovo has NVIDIA G-SYNC, it’s also significantly more expensive (~$1,000), and many users are complaining about its loud built-in fan.

Either way, we recommend considering the Samsung Odyssey G7 at this price range. It’s available as both 27″ and 32″ variants.

The Samsung G7 is also a 1440p 240Hz gaming monitor, but it has a VA panel with a significantly higher contrast ratio and better color quality.

While its pixel response time speed is also quoted at 1ms GtG, it’s not quite as fast, but you won’t get any prominent smearing in fast-paced games, anyway.

Visit our always up-to-date best gaming monitors buyer’s guide for the best deals currently available and all the information you need to know before purchasing the perfect monitor for you.