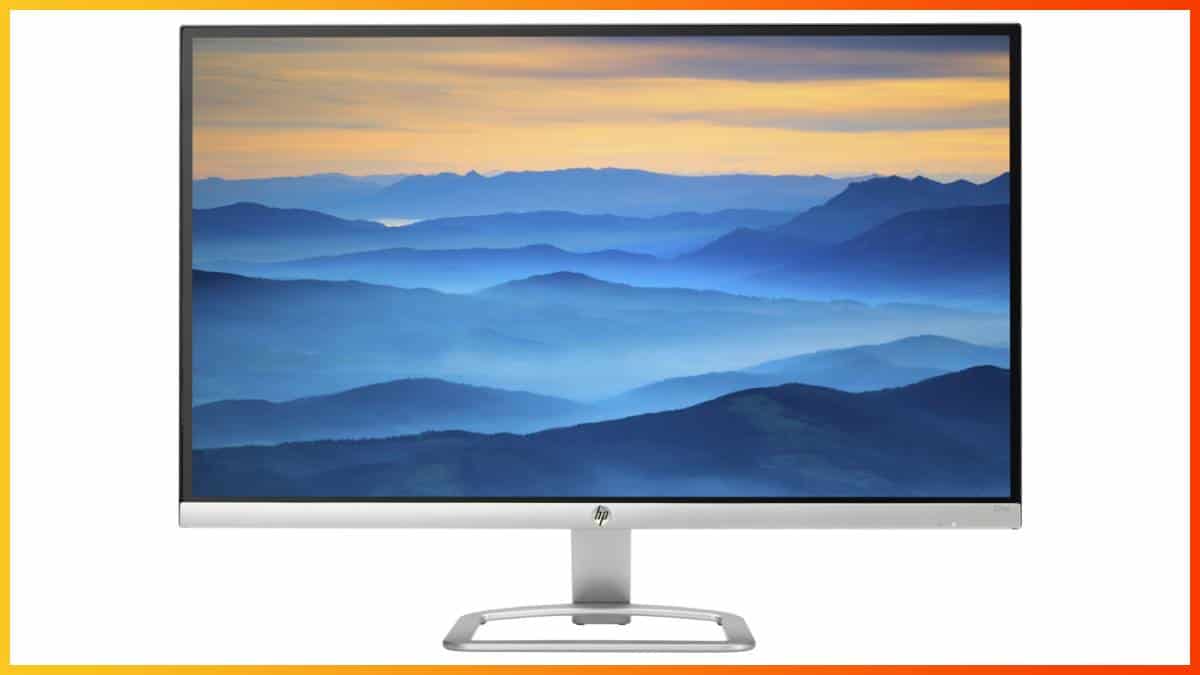 Thanks to its glossy screen surface and ultra-slim design panel, among other things, the HP 27es was an eye-catching display that stood out from the crowd several years ago.

Nowadays, there are better alternatives available.

The HP 27es is an older 27″ 1080p IPS monitor intended for everyday use. Back in the day, it was popular due to its ultra-slim design and glossy screen surface. Today, we are going to compare it to modern displays to see whether it’s still worth it.

Even though it is based on an IPS panel that’s a few generations older than the currently relevant technology, the HP 27es monitor offers vibrant and accurate colors as well as wide 178-degree viewing angles.

It supports 8-bit color depth via dithering (6-bit + 2-bit FRC) for 16.7 million colors covering 96% of the standard sRGB gamut. While the colors are vibrant and consistent, they are not ideal for color-critical work.

Luckily, nowadays, you can get a monitor for professional photo-editing, such as the ASUS PA248QV, for roughly the same price as the HP 27es goes for.

Furthermore, the monitor has a static contrast ratio of 1,000:1, which is standard and a peak luminance of 250-nits.

Under normal viewing conditions, the display is more than bright enough, but if you have a lot of lighting/daylight in your room, you will need to dim it due to the screen’s reflective screen surface.

The performance of the HP 27es 1080p monitor is excellent. There is minimal IPS glow and no dead/stuck pixels, while input lag amounts to ~11ms, which makes for no noticeable delays.

When it comes to gaming, the 60Hz refresh rate certainly won’t appeal to gamers since there are cheaper models that offer AMD FreeSync up to 75Hz. You can even get a budget 144Hz gaming monitor in this price range.

The HP 27es has a response time speed of 7ms, which is a bit slower than that of modern IPS displays, but there’s no particularly noticeable trailing of fast-moving objects in video games.

There are four hotkeys for OSD (On-Screen Display) navigation plus a power button on the bottom bezel of the screen. You can also use the My Display software for altering brightness/contrast, color, saving picture presets, etc.

Connectivity options include two HDMI 1.4 ports and a VGA port. There’s no headphones jack nor built-in speakers. The design is tilt-only (-2°, 25°), and the screen is not VESA mount compatible.

Moving on, the HP 27es has a very slim profile and narrow bezels, which made the monitor very popular back in the day, but nowadays, such design is quite common.

The screen surface of the monitor is glossy with a low-haze anti-glare treatment.

This makes the display somewhat reflective, but it also allows the colors to be more vivid, which is excellent for dim-lit rooms, but no so much for rooms with many windows/direct lighting.

The HP 27es price ranges from around $160 to $250. Even at $160, it’s too expensive considering its specs and the available alternatives.

We highly recommend getting the ASUS VA24DQ instead. It has a higher pixel density, AMD FreeSync up to 75Hz, a DisplayPort input, a wider color gamut, and more features for the same price.