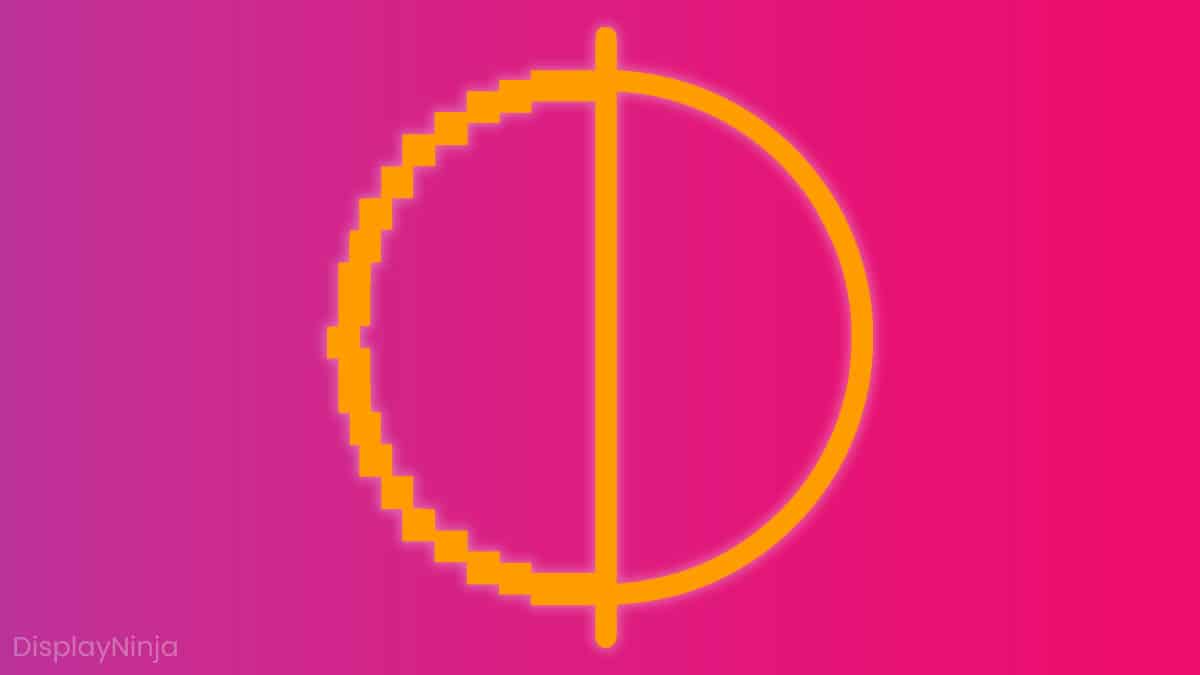 The best way to figure out which type of AA (Anti-Aliasing) works the best for you is to simply try every AA available until you find the sweet spot between the image enhancement and tolerable performance hit.

We’ll go into details about all popular anti-aliasing types to give you a better idea of what each of them does.

Are the graphics in your video games jaggy or suffer from the staircase effect? Can you see the rough edges instead of a round shape? Don’t worry, there are ways to improve this.

The prominent jaggies appear due to the low resolution, so the most effective way to get rid of it is by getting a higher resolution monitor.

In fact, on a 27″ 4K monitor, for instance, the image is so crisp and sharp that you most likely won’t even need any sort of AA.

However, if you can’t afford a new monitor or the PC gear required to run higher resolutions, you can use one of many anti-aliasing techniques available to improve the image quality.

Some are more efficient than others but usually come at a higher performance cost resulting in FPS (Frames Per Second) drop.

There are two main groups of anti-aliasing.

The first group we’ll get into increases the sample rate by rendering more pixels than the screen actually needs and then down-samples it to your resolution.

Alternatively, the second group of AA types blurs the rough edges on the screen after the rendering process. Since this version of AA is post-processing, there’s only a tiny impact on your performance, but the image quality improvement is also less noticeable and can appear too blurry, especially with fast motion.

So, if you can afford to sacrifice performance for the picture quality, you will likely opt for some sort of sampling anti-aliasing.

If every frame per second is precious to you, then you will have to settle for a post-processing AA, which may slightly blur the image, but at least it will eliminate the unpleasant staircase effect.

First off, we have the SSAA (Super-Sampling Anti-Aliasing) or FSAA (Full-Scene Anti-Aliasing), which were the first forms of AA to be available and still deliver the arguably best image quality enhancement but with a substantial performance cost.

A more popular AA is the MSAA (Multi-Sample Anti-Aliasing), which only applies the sampling to the edges, where it is most needed, and will thus save you the performance cost while still noticeably improving the image quality.

Moreover, NVIDIA and AMD have their own propriety versions of MSAA. Both Nvidia’s CSAA (Coverage-Sample AA) and AMD’s EQAA (Enhanced Quality Anti-Aliasing) are derivates of MSAA and function pretty much the same way.

The most common post-processing AA is FXAA (Fast-Approximate Anti-Aliasing). As previously described, enabling this will blur out the annoying jaggies with the minimal performance cost.

Overall, this peculiar anti-aliasing algorithm may repulse many gamers due to the blurry image, but if you have limited system horse-power, it is likely your only choice as it’s the best anti-aliasing method for performance.

AMD’s MLAA (Morphological Anti-Aliasing) is similar to FXAA, you get a blurry picture at a tiny performance cost, but it smoothes out the rough edges.

NVIDIA’s TXAA or TAA (Temporal Anti-Aliasing) combines MSAA (down-sampling) and post-processing (blurring) with temporal filters for the overall better outcome. However, you will need a graphics card based on NVIDIA’s Kepler GPU, a GTX 600-series or higher, for this technology.

Another in-between solution is SMAA (Sub-Pixel Morphological Anti-Aliasing), which is the middle ground between FXAA and MSAA regarding both image quality and performance cost. Basically, it works like FXAA but also detects the edges to smooth them out specifically.

Then we have CMAA (Conservative Morphological Anti-Aliasing), which is a combination of FXAA again and SMAA. So, you get less blurring than with FXAA, but a softer image than SMAA while the performance cost is in-between the two.

This technology allows your GPU to render the screen up to 4K (depending on the max resolution of your monitor) and then down-sample it to your monitor’s native resolution.

Additionally, this isn’t only great for gaming as you can increase the resolution of your desktop as well, which will give you more screen real estate.

Inversely to VSR, AMD’s FSR technology makes the GPU render at a lower resolution and then uses its upscaling algorithm in order to provide you with a higher frame rate.

The trade-off between how much extra FPS you get and how much the image quality is affected is up to you as you can choose between different presets (Ultra Quality, Quality, Balance and Performance). The ‘Performance’ mode offers the highest FPS gain at the biggest toll on image quality, while ‘Ultra Quality’ has the lowest FPS gain but also has the smallest impact on picture quality.

AMD’s FSR is open-source, but in order to use it, the game must support it and you will need a compatible GPU (GTX 10-series or AMD RX 460, or newer).

You can find a list of all games (including upcoming titles) that support FSR here.

Some modders have also succeeded in adding FSR support to games that don’t support it natively, for instance, GTA V.

AMD’s FSR 2.0 uses temporal upscaling instead of spatial (like FSR 1.0).

FSR 1.0 is most beneficial at high resolutions, such as 4K UHD, and when using the ‘Ultra Quality’ or ‘Quality’ presets, whereas FPS 2.0 offers better image quality and performance at 4K, but also great results at lower resolutions and with modes that favor performance.

AMD’s RSR technology uses the same algorithm as FSR 1.0, but it’s driver-based, allowing you to use it in any game in full-screen mode. However, it requires an AMD RDNA-based GPU (RX 5000 series or newer).

Just like AMD’s FSR, NVIDIA DLSS 2.0 (Deep Learning Super Sampling) makes your GPU render at a lower resolution, but it uses artificial intelligence for better upscaling. So, you get a higher frame rate with a lower impact on image quality in comparison to FSR.

However, DLSS 2.0 is not open-source. In order to use it, a game must support it and you need to have a compatible NVIDIA GPU with Tensor Cores (RTX 20-series, 30-series, or newer).

Newer versions of DLSS (2.1, 2.2, etc.) are also available. They work on the same principle, but offer improved performance and/or reduced visual artifacts.

You can still find the older DLSS 1.0 version in some games and while it can sometimes improve performance, the impact on the image quality is usually not worth it.

With DLSS 3, 3/4 of the first frame is upscaled via AI, while the second frame is reconstructed via DLSS Frame Generation for an even higher gain in frame rates in comparison to DLSS 2.

Although you get higher FPS, frame generation actually increases the input lag as DLSS 3 requires data from the ‘next’ frame. So, as a result, you get smoother motion, but not as responsive gaming experience. The generated frames can also cause some visual artifacts.

If you have a high base frame rate (~120FPS), DLSS 3 can boost it up to ~200FPS. In this case, the visual artifacts and the added input latency aren’t that noticeable, but if your base FPS is below 100FPS, DLSS 3 isn’t very useful – you get a higher frame rate, but the responsiveness is noticeably worse and you get visual artifacts.

Furthermore, DLSS 3 cannot be used with V-Sync or capped frame rates, so it’s mostly suited for high refresh rate (240Hz+) displays with VRR. And due to the increased input lag, it’s not useful for competitive gaming.

So, what is the best option for you?

There are many more types of AA, such as NVIDIA’s SGSSA and OGSSAA, which need more complex driver editing and adjusting, but we will get to that in a dedicated article later on.

For games that don’t have any AA or not the ones you need, you can download software such as Reshade, which can inject certain anti-aliasing methods, including SMAA, among others. Or simply use NVIDIA’s or AMD’s super-resolution feature if your GPU supports it.

Hopefully, after reading this, you’ll have a better idea of what to do in your anti-aliasing section of the video settings in your games.

What Is Pixel Density And Pixels Per Inch (PPI)?