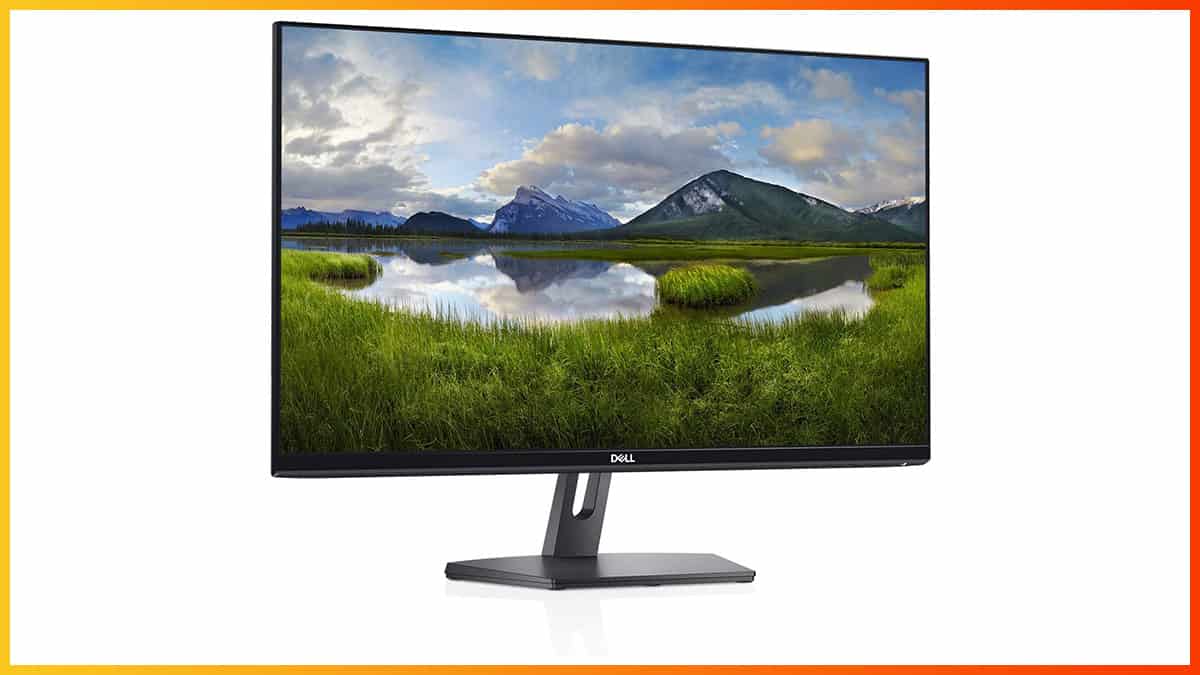 The Dell SE2719H is a 27″ 1080p monitor with an IPS panel. It’s a decent monitor overall, but for the same amount of money, you can get a much better display.

For a lot of people, a simple 27″ monitor will suffice for basic home computer use, such as web surfing, watching videos, a bit of office-related work, and casual gaming.

The Dell SE2719H was a popular budget 27″ monitor back in 2018 due to its attractive design and IPS panel technology with wide viewing angles and vivid colors, but how does it fare today?

The monitor is based on an IPS panel with wide 178° viewing angles and consistent colors meaning that the picture will remain perfect regardless of the angle you’re looking at the screen; there are no shifts in contrast, gamma, or saturation as it’s the case with TN and VA panel monitors.

Its peak brightness amounts to 300-nits, which is plenty under normal lighting conditions, and you’ll most likely want to reduce the brightness setting down to ~50 out of the box.

Further, the Dell SE2719H monitor has a contrast ratio of 1,000:1 as expected from an IPS panel display. So, you won’t get quite as deep blacks as that of VA monitors with a usual contrast ratio of around 3,000:1, but these panels have other disadvantages.

The difference between dithered and true 8-bit color isn’t noticeable, though dithering can sometimes cause a 30Hz flicker, which those extremely sensitive to flickering might find bothersome.

The monitor has a quoted color gamut of 72% NTSC, which is roughly equivalent to 100% sRGB gamut size. However, this doesn’t mean that the Dell SE2719H covers 100% of the sRGB color space. There will be some extension beyond the sRGB color space, as well as some undercoverage, depending on the individual unit due to panel variance.

Overall, you get vivid colors, but the monitor is not recommend for color-critical work.

Around this price range, you can get a much better display for photo/video editing and similar tasks, such as the ASUS PA248QV with a 100% sRGB gamut coverage and Delta < 2 factory-calibration.

In comparison to 24″ 1080p monitors with 92 PPI, the image on the SE2719H will consist of larger and more visible pixels, which results in more pixely details and less screen real estate. Some users don’t mind such low pixel density, but it’s something to keep in mind.

Like it’s the case with all IPS monitors, some IPS glow is noticeable in dark scenes displayed in a dark room, but it’s manageable. Keep in mind that the amount of IPS glow, just like backlight bleeding or dead/stuck pixels, varies across different units of monitors.

Due to the lack of a variable refresh rate technology (Adaptive-Sync or FreeSync) and the maximum refresh rate of only 60Hz, the Dell SE2719H display won’t appeal to gamers.

There are two response time overdrive options in the OSD (On-Screen Display) menu of the monitor: Normal and Fast. The ‘Fast’ option can introduce inverse ghosting (or pixel overshoot), so we recommend sticking with ‘Normal.’

You should also be able to create a custom resolution and overclock the monitor to 75Hz, but this might not work for every unit of the Dell SE2719H.

Lastly, the monitor is TUV-certified as flicker-free and there’s an integrated low-blue light filter (the ComfortView mode) for preventing eye strain.

There are four hotkeys and a power button beneath the bottom bezel at the right-hand side of the monitor.

The buttons can be used for navigation through the OSD menu, and you can assign different shortcuts for two hotkeys, such as quick brightness/contrast adjustment.

While there are no gamma presets available, you can adjust hue/saturation and sharpness of the picture.

The stand of the monitor is sturdy and doesn’t take a lot of desk space, but you can only tilt the screen by -5°/21° as far as ergonomics go. While the stand is detachable, the screen is not VESA mount compatible.

There’s a low-haze anti-glare matte coating that eliminates reflections without making the picture appear too grainy.

Connectivity options include one HDMI 1.4 port and a VGA input; there’s no dedicated audio jack.

The Dell SE2719H goes for ~$150 – $200, which is overpriced considering its image quality, performance, and features.

At this price range, you can get a much better monitor, such as the AOC 24G2 with 144Hz and AMD FreeSync, which is not only drastically better for gaming but for everyday use as well due to its wider color gamut, better connectivity options, and ergonomic design.

Both models can also be found as SE2719HX and SE2419HX. These are identical monitors, but come with different cables (X models come with an HDMI cable, the standard models with VGA).

Additionally, you can find them as SE2719HR and SE2419HR. The ‘R’ suffix usually just stands for ‘retail’ for Dell monitors. However, these models also support FreeSync up to 75Hz over HDMI (48-75Hz variable refresh rate range).

The 24″ models have identical specifications as the 27″ variants, apart from a slightly lower 250-nit peak brightness and the difference in pixel density.

Regardless, all models are usually overpriced and you can find better monitors at the same price range. They might be worth considering if you find them on a big sale, in which case feel free to leave us a comment below if you’re not sure which monitor to pick!

The Dell SE2719H is an overall decent monitor, but there are much better alternatives at this price range.