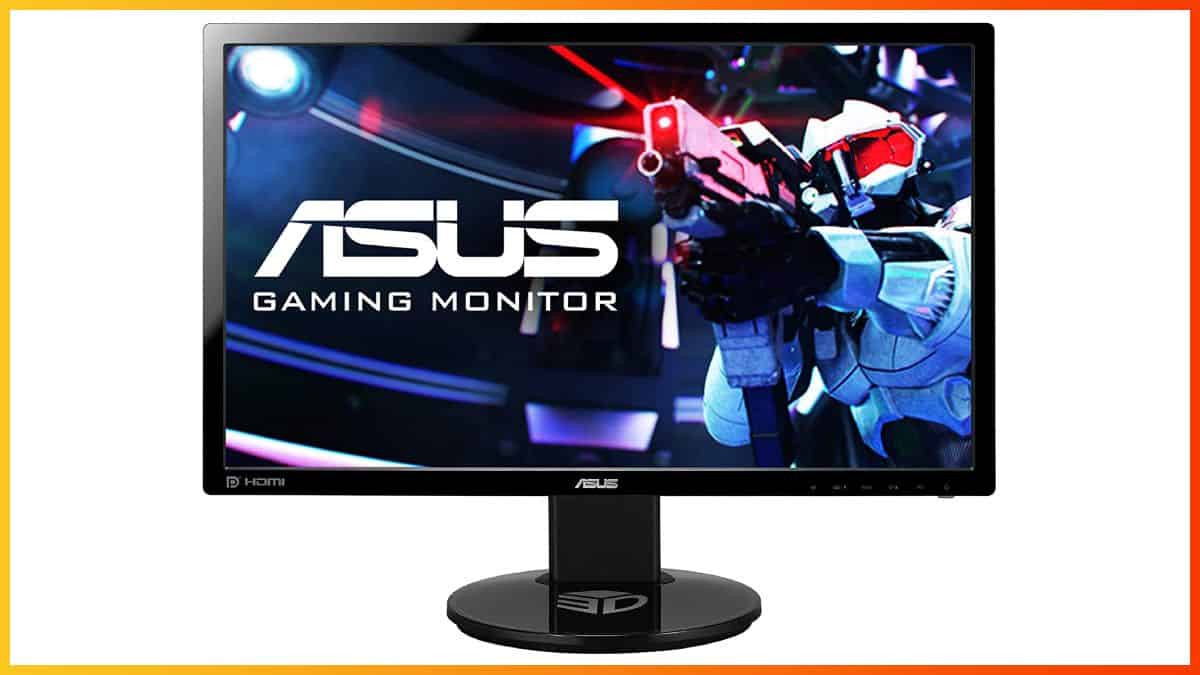 The ASUS VG248QE is one of the most popular and top-rated 24″ 1080p 144Hz 1ms gaming monitors. However, there are better and more affordable alternatives available.

The ASUS VG248QE is one of the most popular 1080p 144Hz 1ms gaming monitors, but does it live up to its reputation? Long story short, not really – and here’s why.

In order to launch the best performance for competitive first-person shooters, the ASUS VG248QE monitor features a TN panel with a rapid response time speed, which comes at the cost of viewing angles and color quality.

The ASUS VG248QE response time speed amounts to only 1ms, which is quick enough to eliminate almost all visible ghosting and trailing of fast-moving objects in video games.

While the viewing angles of 170/160 degrees cause the image to degrade in color and contrast when you are looking at the screen from skewed angles, the image will stay intact as long as you’re sitting directly in front of it.

In comparison to other panel technologies (IPS and VA), TN panels have the worst image quality.

For a hardcore gamer, of course, viewing angles and picture quality won’t be as important as the response time speed, which is why the ASUS VG248QE is mainly intended for competitive gamers.

At 144Hz, the ASUS VG248QE input lag amounts to only ~5ms, which makes it fit for professional gaming.

The combination of its low input lag and fast response time, along with its high 144Hz refresh rate makes fast-paced gaming more immersive and enjoyable, but it also gives you a slight edge over your rivals with regular 60Hz/75Hz screens.

Other panel-related specs include a 350-nit peak brightness, a 1,000:1 static contrast ratio, and 8-bit color depth with 16.7 million supported colors, all of which is standard for a monitor at this price range.

This technology can work simultaneously as LightBoost to increase the screen brightness and decrease ghosting and crosstalk.

Alternatively, you can just use LightBoost to decrease motion blur by backlight strobing, but at the cost of added input lag.

Certain workarounds include fiddling with driver settings and third-party software that can get rid of the extra input lag and can make LightBoost work with AMD graphics cards.

However, these methods are complicated for an average gamer and may not give the same results as each ASUS VG248QE unit is slightly different.

Besides, nowadays, you can get a 1080p 144Hz 1ms gaming monitor such as the BenQ ZOWIE XL2411P, which has a backlight strobing technology that can work with any graphics card straight out of the box.

Other gaming-related features of the ASUS VG248QE 144Hz monitor include GamePlus, which consists of customizable crosshairs and on-screen timers for better precision and timing in FPS, RTS, and RPG video games.

Keep in mind that the ASUS VG248QE monitor is not flicker-free as it uses PWM to regulate brightness.

It also doesn’t have a low-blue light filter, so if you are sensitive to screen flicker, you may encounter headaches and/or eye fatigue after long use of the monitor.

Finally, there’s the TraceFree response time overdrive feature, which increases the pixel transition speed. However, setting it to over 60/100 can introduce inverse ghosting, also known as pixel overshoot.

The ASUS VG248QE monitor has thick glossy bezels which may not appeal to everybody, but the design features full ergonomic support including +/- 45° swivel, -5°/15° tilt, 90° clockwise pivot, and up to 110mm height adjustment. It’s also VESA mount compatible.

Connectivity options include HDMI 1.4, Dual-Link DVI, and DisplayPort 1.2. There’s also an audio line-out port for the headphones and line-in for the 2×2 built-in speakers.

Keep in mind that the monitor doesn’t support 144Hz over HDMI even though HDMI 1.4 has enough bandwidth for it. So, use either DisplayPort or DVI for 1080p at 144Hz.

The price of the ASUS VG248QE monitor is around $270, which we find too expensive.

For ~$250, you can get the LG 24GN650, which is just as fast, but also has an IPS panel with more vivid colors and wider viewing angles.

The ASUS VG248QE was one of the first 144Hz monitors with the LightBoost technology which at that time, had an impressive performance with incredible motion clarity and responsiveness; hence its outstanding ratings and popularity.

Nowadays, there are newer monitors that deliver better performance and features at more affordable prices.