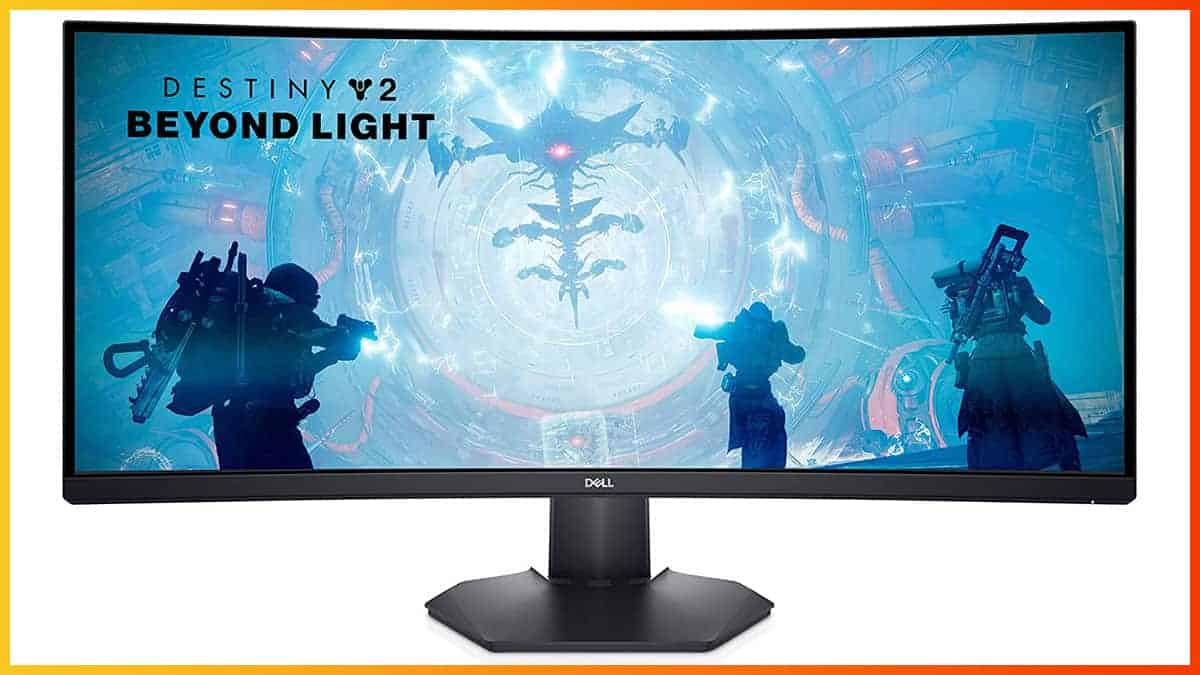 The Dell S3422DWG offers an immersive viewing experience thanks to its ultrawide format, high contrast ratio, strong peak brightness and wide color gamut. However, if you’re sensitive to dark level smearing and screen tearing, you should look for an IPS variant instead.

The Dell S3422DWG is yet another 34″ 3440×1440 ultrawide curved gaming monitor with a VA panel, FreeSync and wide color gamut. Here’s how it compares to its many alternatives.

Thanks to its VA panel, the Dell S3422DWG monitor boasts a high static contrast ratio of 3,000:1, allowing it to produce deep and inky blacks. Moreover, it has a wide 90% DCI-P3 color gamut coverage for rich and saturated colors.

Its native color gamut is equivalent to around 125% sRGB gamut size, so regular sRGB content will be a bit over-saturated, but it’s nothing extreme, you just get a bit of extra color vibrancy. There’s no sRGB emulation mode, but there are ways to clamp the gamut if you have an AMD or an NVIDIA GPU.

The monitor also has a strong peak brightness of 400-nits, so it will easily combat glare even in particularly bright rooms.

Further, the 3440×1440 resolution results in a high pixel density of 110 PPI (pixels per inch) on the 34″ viewable screen of the Dell S3422DWG, providing you with plenty of screen space as well as sharp details and text, without any scaling necessary.

The resolution is a bit more demanding than QHD (2560×1440), but it’s a lot easier to drive than 4K UHD, allowing you to maintain high frame rates with a decent mid-range GPU.

What’s more, the ultrawide format provides you with extra horizontal screen space that’s particularly useful for productivity and office-related work as well as audio/video editing as you get a wider view of your timelines.

You also get a wider field of view in compatibles games and movies shot at the ~21:9 aspect ratio are displayed without the black bars at the top and bottom of the screen as you would see on regular 16:9 widescreen monitors.

16:9 content, on the other hand, will be displayed with black bars at the sides of the screen with the option to zoom in the picture to fill the screen, though this will also crop parts of the image.

Moving on, VA monitors don’t have quite as wide viewing angles as IPS displays, so some minor shifts in gamma and saturation are noticeable at certain angles, but it’s negligible. You can do some basic content creation without issues, but if you need professional-grade accuracy, you should get an IPS monitor instead.

The Super Fast overdrive mode works a lot better as there’s only minor overshoot and ghosting visible, while the Fast mode has no overshoot but more ghosting.

Therefore, we recommend using the Super Fast mode for the best performance. If your refresh rate is around 60Hz, go with the Fast mode instead to avoid overshoot.

There’s some noticeable smearing behind fast-moving objects in dark scenes, but it’s tolerable unless you’re particularly sensitive to it; some gamers might find it unbearable, some won’t mind it at all.

Input lag performance is excellent at around 4ms of delay, which is imperceptible.

The Dell S3422DWG also supports AMD FreeSync Premium Pro for a variable refresh rate (VRR) up to 144Hz. Its VRR range is 48-144Hz with LFC support, so below 47FPS, frames will be multiplied to keep tearing at bay.

You can also use VRR with compatible NVIDIA GPUs over DisplayPort, but the monitor is not officially certified as ‘G-SYNC Compatible.’

Sadly, as it’s the case with most VA monitors, some units are affected by the VRR brightness flickering issue. Since screen tearing isn’t nearly as noticeable at 144Hz as it is at 60Hz, some users might be fine with just disabling VRR completely.

Next, the S3422DWG supports MBR (Motion Blur Reduction), which Dell labeled as ‘MPRT.’ This technology uses backlight strobing to reduce perceived motion blur, but it reduces the brightness while active and it cannot work at the same time as VRR. Further, it introduces screen flickering that’s invisible to the human eye but might bother users sensitive to flicker.

The backlight of the monitor is flicker-free (unless MPRT is enabled) and there’s an integrated low-blue light filter available.

The Dell S3422DWG supports HDR (High Dynamic Range) and has VESA’s DisplayHDR 400 certification. Since it lacks local dimming, among other things, you’re not getting the true HDR viewing experience.

However, due to its decent brightness, contrast and color gamut, some HDR scenes might look a bit better than SDR, especially if you have an AMD GPU and you’re playing FreeSync Premium Pro compatible games for better tone mapping.

Moving on, the monitor offers plenty of useful features. The OSD (On-Screen Display) menu is accessed via the directional joystick at the rear of the monitor, next to four additional hotkeys that can be used as certain shortcuts.

Apart from the standard image adjustments (brightness, contrast, color temperature, aspect ratio, input source selection), the Dell S3422DWG also has some advanced settings, such as hue/saturation and sharpness, but no gamma modes.

The screen has a moderate 1800R curvature for added immersion and a light matte anti-glare coating against reflections.

You can find the AOC CU34G2X and the Gigabyte G34WQC/A for $450 and for ~$400 on sale. These two models use a similar VA panel with a slightly more aggressive 1500R screen curvature. The overall image quality and performance is very similar, so pick whichever is the cheapest in your region or according to your preference of the design and/or features.

If you don’t want to deal with smearing and VRR brightness flickering, consider the Gigabyte M34WQ with an IPS panel. It offers smooth VRR performance and a quicker response time speed, but its contrast ratio is not as high and it has a flat screen instead of a curved one.

Check out our best ultrawide monitor buyer’s guide for more information and the best deals available.

All in all, the Dell S3422DWG is an excellent ultrawide monitor for gaming, work and everyday use as long as you’re not too sensitive to smearing and screen tearing. Since there are plenty of monitors that are based on this (or similar) panel, be sure to check them all out in order to get the best value for money.