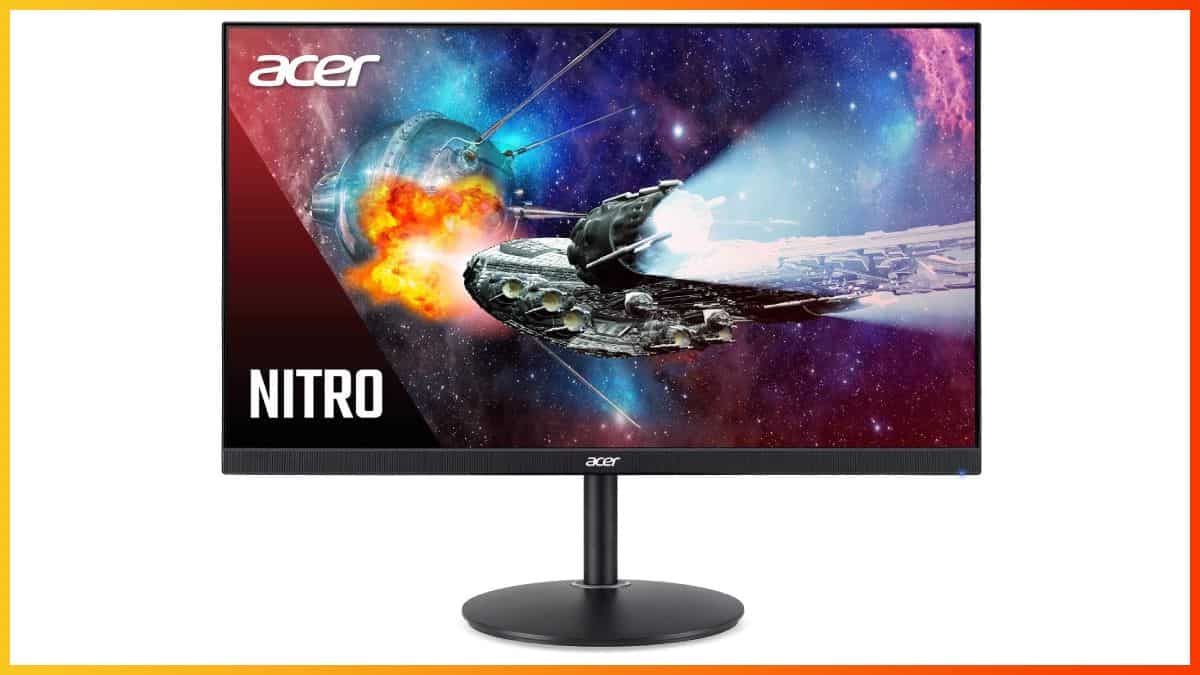 Although its response time speed is not as fast as promised (this is the case with basically all monitors), the Acer XF252Q does deliver an incredibly smooth fast-paced gaming experience thanks to its 240Hz refresh rate, low input lag, VRR, and excellent overdrive and MBR implementations. Plus, it’s affordable, has a great design, and rich connectivity options! However, we recommend considering an IPS version.

But that’s not all. The Acer XF252Q also packs a bunch of useful gaming features, such as FreeSync and Motion Blur Reduction, and offers premium design and connectivity options.

The monitor is based on a newer version of the 24.5″ 240Hz TN panel by AU Optronics, which increases the pixel response time speed from the standard 1ms GtG (gray to gray) to 0.5ms GtG.

Acer claims to have further tweaked the response time to 0.3ms, but these measurements are always exaggerated and should be taken with reservation. More on that later.

Apart from the faster response time, the upgraded panel has all the same specifications as the previous variants found in popular 240Hz models, such as the Acer XF250Q, the Dell AW2518HF, and the BenQ XL2540.

The Acer XF252Q 240Hz gaming monitor does also bring HDR10 support to the table, but since it lacks proper color gamut and contrast ratio, HDR is just software-emulated, meaning that you can pretty much ignore it.

Thanks to 1080p resolution, you’ll easily be able to reach high frame rates in competitive eSports titles even with a solid mid-range PC build, which will allow you to take full advantage of the monitor’s 240Hz refresh rate.

Furthermore, since the monitor only has a 24.5″ viewable screen, you get a decent pixel density of ~90 pixels per inch, so you’ll get a good amount of screen space and detail clarity.

If you care about image quality, you can get a good 1440p or ultrawide display at this price range for a more immersive gaming experience. The Acer XF252Q is all about speed.

Now, as we’ve already mentioned, monitor manufacturers always exaggerate the response time speed of their displays. The Acer XF252Q might have actually hit the 0.3ms pixel transition mark, but only under very specific testing conditions and with strong overdrive applied, which you wouldn’t actually wish to use in reality.

The Normal overdrive preset, however, has no pixel overshoot whatsoever, and it’s sufficient to eliminate any prominent ghosting at 240Hz.

Will you notice any significant difference between the Acer XF252Q and the older 240Hz models when it comes to response time speed? Not really. So, if you already own a 240Hz display, there’s no reason to get the XF252Q.

In case you don’t have a 240Hz monitor but want one, you might as well get the Acer XF252Q since it does have a very fast response time speed and an outstanding overdrive implementation with basically zero overshoot.

Plus, it has a low input lag of only ~3ms, and it features Motion Blur Reduction (MBR) technology called VRB (Visual Response Boost), which via backlight strobing further reduces the perceived blur.

VRB can operate at either 120Hz, 144Hz, or 240Hz (fixed refresh rate) in two different modes: Normal and Extreme. When using this technology, the maximum brightness is decreased, but motion clarity is increased.

The MBR technology implementation of the Acer XF252Q is impressively good as you can use backlight strobing at 240Hz and still get a decent luminance of around 250-nits using the Normal mode. What’s more, many 240Hz models can only strobe up to 144Hz.

If you’re a fan of CRT-like motion clarity, you’re going to love this gaming monitor.

Although the display is not certified by NVIDIA as G-SYNC compatible, FreeSync works without a problem on this monitor when using compatible NVIDIA GPUs.

Once enabled, FreeSync synchronizes monitor’s refresh rate with GPU’s frame rate, which in turn prevents screen tearing and stuttering with basically no input lag penalty (~1ms). However, you cannot use FreeSync and MBR at the same time. So, you have to choose between the two depending on your preference, video game, PC build, etc.

The OSD (On-Screen Display) menu is user-friendly and easy to navigate with thanks to the joystick placed at the back of the monitor. There’s also a power button and three additional hotkeys which can be used as shortcuts for certain functions.

Note that you cannot use FreeSync or VRB at the same time as HDR.

Connectivity options include DisplayPort 1.2, two HDMI 2.0 ports, a quad-USB 3.0 hub (two ports at the side), a headphone jack and two 2W built-in speakers.

This monitor is also available as the Acer Predator XN253Q X, which is priced around $500 due to the G-SYNC module, yet its backlight strobing technology maxes out at 144Hz.

We recommend getting a 1080p 240Hz IPS gaming monitor instead; they’re basically just as fast, but offer much better colors and viewing angles. The ViewSonic XG2431 has an incredible backlight strobing implementation and it’s our top-recommended 1080p 240Hz display. If you don’t need MBR, check out the Dell S2522HG.

While it may not have an actual response time speed of 0.3ms, the Acer XF252Q does have an impeccable pixel response time performance thanks to its excellent overdrive implementation, which successfully eliminates both trailing and overshoot.

Furthermore, it offers a good backlight strobing technology with a very low brightness penalty and decent customization as well as additional useful gaming features, a versatile design and extensive connectivity.

Most gamers, however, will be happier with a newer 1080p 240Hz IPS gaming monitor due to better image quality and virtually identical performance.