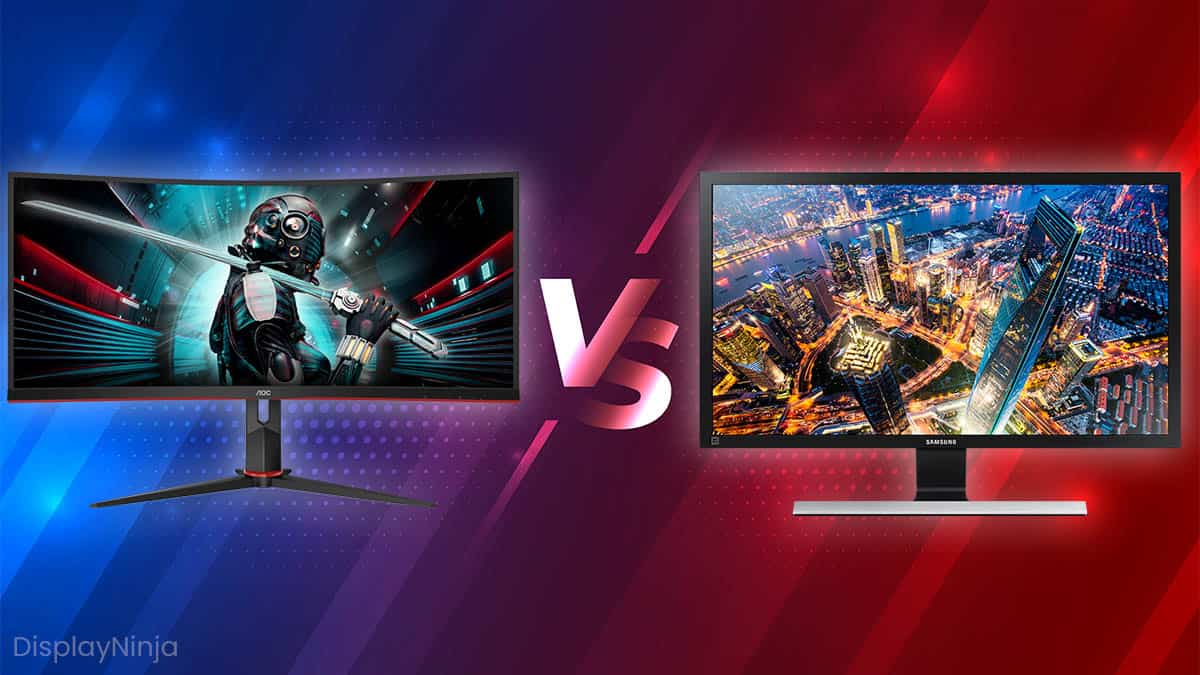 Torn between getting an ultrawide display or a 4K monitor? The choice is definitely tough as both types of screens have their pros and cons.

Besides your own personal preference between the two, regarding their design and appearance, there are additional aspects you should consider.

We’ll fill you in on everything you need to know before making your decision.

Some bigger ultrawide monitors feature even higher screen resolutions such as 3840×1600 and 5120×2160. The latter is considered as 5K ultrawide (and 5K2K or 2160p ultrawide), which is kind of a combination between 4K and ultrawide.

In the picture above, you can see how a wider resolution can affect your field of view in compatible video games.

In comparison, the 4K Ultra HD resolution has 3840×2160 pixels, which is over three million pixels more than 3440×1440 (the most popular ultrawide resolution).

Ultrawide monitors are usually curved, some more aggressively than others, but there are also some flat ones for those who are worried that the screen curvature would mess up the color accuracy or distort straight lines.

Regardless, this isn’t an issue as these curved monitors are built with the points mentioned above in mind.

As long as you are sitting in front of the monitor, you won’t face any color inconsistency; however, lines will be skewed, which can be inconvenient depending on what type of content creation you do.

The ultrawide aspect ratio also provides you with more screen real estate for your spreadsheets and applications, but if you want maximum screen space for productivity purposes, you’d be better off with a dual 16:9 monitor setup.

If you’re a video editor, on the other hand, an ultra-wide display will be of great help due to the extra horizontal space, as you can have a more comprehensive view of your timelines.

Check out the best 4K displays and the best ultrawide monitors for photo/video editing.

At first, you may not even like the way your ultra-wide monitor looks as it can appear too wide for its vertical size, but you will get used to it eventually.

Upgrading to a 4K UHD display from 1080p or even 1440p may also take some time getting used to as even on a 32-inch screen, the 4K resolution provides you with a high pixel density making everything on your desktop tiny.

So, you will need to scale the interface by a certain amount to make small items such as icons and text easily readable. A problem occurs when some applications don’t scale well or not at all, leaving you with a messy interface with either too small or too large elements.

As you can see, both choices have their downsides. The upsides? Watching compatible content at the native resolution. Indeed, with a 21:9 ultrawide display, movies are closer to their native aspect ratio at which they are shot (2.39:1).

On the other hand, there’s a lot of 4K content nowadays available as well, allowing you to enjoy your favorite shows and games in crystal-clear quality with maximum detail.

4K vs UltraWide For Gaming

To start with, we’ll focus on the negative aspects of both types of monitors to make it easier for you to choose.

The main downside of a 4K gaming monitor is the PC rig and the cost required to run demanding video games at 4K with decent settings and frame rates, especially when it comes to high refresh rate 4K monitors, such as the LG 27GP950 4K 144Hz display.

You would get an excellent image quality but at the cost of performance.

For instance, if you have a proper PC rig to run 4K at 60FPS, you could also run 3440×1440 at ~100FPS. Simply put, the difference in frame rates between these two setups will have a more significant effect on the overall gaming experience than the difference in image quality.

Plus, ultrawide monitors make the gaming experience more immersive by extending your field of view, which trivializes the slightly more detailed picture 4K displays have to offer.

Keep in mind that not all games support the 21:9 format, which will result in a stretched image or black bars at the sides of your screen.

What’s more, even some newer competitive games such as Valorant and mostly Blizzard games (Overwatch, Diablo, StarCraft) don’t support the ultrawide format as they deem it’d be an unfair advantage against other players. So, make sure your favorite games support 21:9 resolutions before you get one.

In the end, you should choose between 4K and ultrawide according to what type of content you’ll be watching the most.

There’s no use in getting an ultrawide monitor if none of your games support the 21:9 format; just as it makes no sense to get a 4K display if your PC rig can’t do it justice.

What Is GPU Scaling?