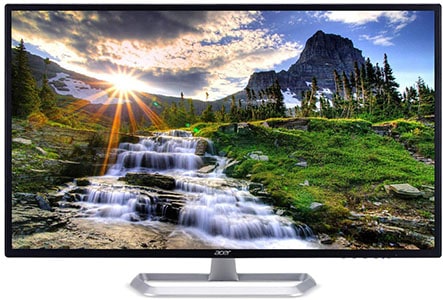 The Acer EB321HQU is an affordable 32″ 1440p IPS monitor. It’s a great monitor for multimedia enjoyment, however, if you’re mainly into gaming, we recommend investing in the AOC Q3279VWFD8 instead.

Looking for a big 32″ monitor with a high enough resolution for a crisp image quality as well as an affordable price? Then the Acer EB321HQU is the monitor for you!

Moreover, thanks to its WQHD resolution of 2560×1440 pixels, the picture has sharp and clear details with a decent amount of screen real estate available.

Note that the image is not as crisp as that of 27″ 1440p monitors which have a higher pixel density due to the smaller screen size.

In fact, in terms of pixel density, you get the same pixel per inch ratio as you’d get on a 24″ 1080p display.

With a peak brightness of 300-nits and a static contrast ratio of 1,200:1, the picture is quite bright with an excellent relation between the darkest and the brightest shades.

There is some minor IPS glow present which is an expected drawback of the panel. In dark rooms, this glowing effect can make black colors around the corners of the screen appear somewhat grayish.

This can be easily solved by slightly lowering the screen’s brightness or introducing some ambient lighting to your room.

The Acer EB321HQU input lag performance is top-notch at just below 10ms of imperceptible delay.

Further, the monitor’s response time speed performance is excellent as well with no prominent ghosting or smearing of fast-moving objects.

There’s an OD (Overdrive) setting for the response time in the OSD (On-Screen Display) menu, but leaving it on ‘Normal’ does the job just fine.

Unfortunately, the Acer EB321HQU monitor is limited to 60Hz, so if you’re used to a higher refresh rate display, you will notice and feel a decrease in motion clarity while gaming.

If you’re just upgrading from a smaller/lower resolution display, you’ll be able to enjoy the monitor’s stunning image quality without any issues.

The Acer EB321HQU is also a great monitor for Xbox One S and Xbox One X due to the native 1440p support of the consoles.

Alas, the monitor lacks the AMD FreeSync technology support which would’ve made it perfect for Xbox One.

As you can see, the OSD menu of the Acer EB321HQU 1440p display looks outdated since it’s an older model, after all. However, the OSD is quite easy to use and has all the adjustments you may need.

Opening up the menu provides you with four options: changing the picture preset (User, Eco, Standard, Graphic, Movie), activating the Picture in Picture mode, entering the OSD settings, and changing the input source.

The Acer EB321HQU has advanced picture adjustments available including the gamma and 6-axis color settings.

It also has a low-blue light filter which blocks out the blue lights that are harmful to your eyes. 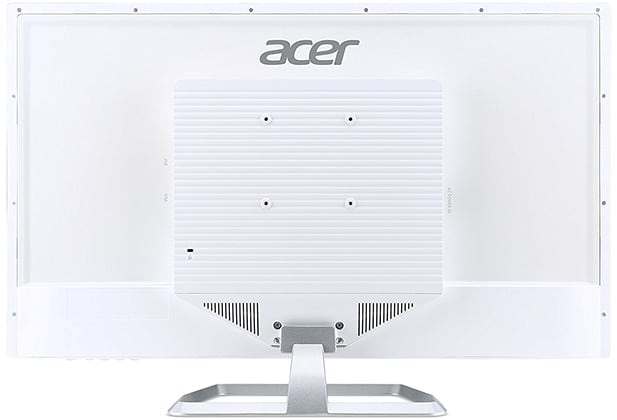 On the right side of the display, you will find DL-DVI-D, HDMI, DisplayPort, and a headphones jack while the power jack is on the left side.

The Acer EB321HQU price is around $250. For roughly the same price, you can get the AOC Q3279VWDF8 instead which is a newer 32″ 1440p IPS monitor with more features including AMD FreeSync up to 75Hz.

Overall, the Acer EB321HQU is an excellent monitor for the price. It will provide you with a big screen, a high resolution, and gorgeous colors making it ideal for everything ranging from any multimedia use to PC and console gaming.