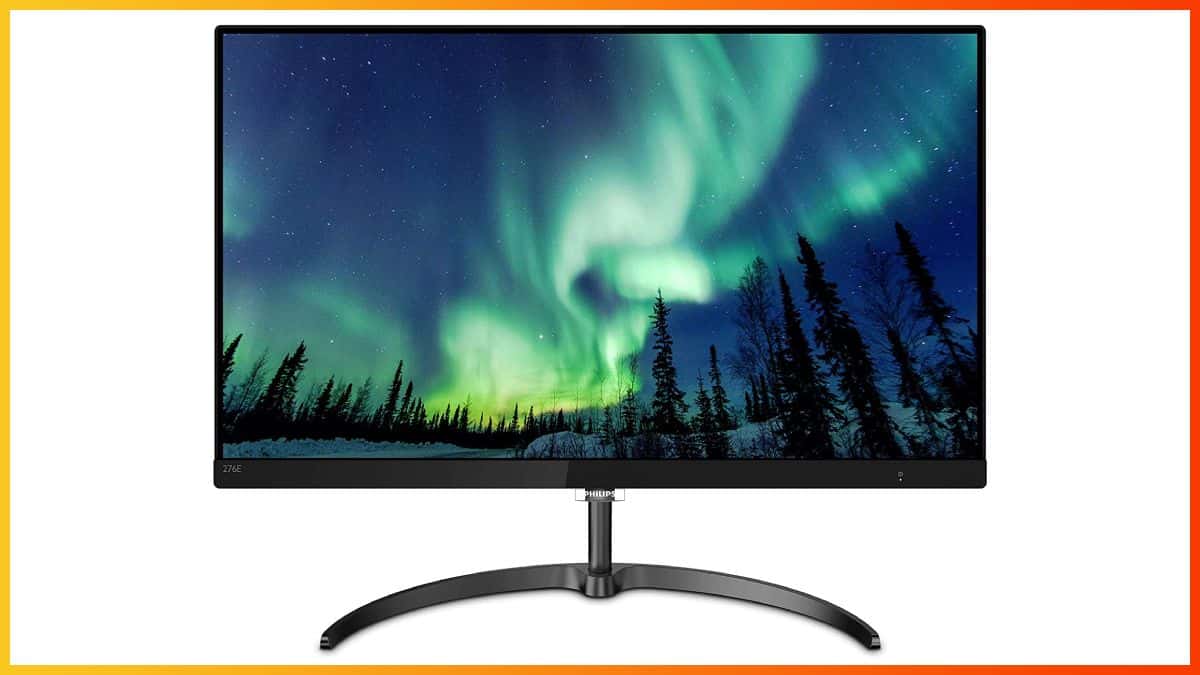 The Philips 276E8VJSB is an excellent 27″ 4K IPS monitor for the price. While it does lack some important features such as FreeSync and VESA mount compatibility, it’s also cheaper than the alternatives which may be a good trade-off for those with a limited budget or for those don’t need the said features.

The Philips 276E8VJSB is one of the cheapest 27″ 4K IPS monitors available.

Naturally, some sacrifices had to be made in order to decrease the monitor’s price. In this review, we’ll go over what those sacrifices are and whether they’re worth it.

The slightly extended sRGB gamut provides you with more saturated colors (not over-saturated, which is good), which makes them look more lifelike.

If you need to do some color-critical work, you can limit the gamut to the sRGB space for less vibrant, but more accurate color reproduction.

Overall, the colors are accurate, consistent, and vibrant, as expected from a 4K IPS monitor. Further, the 178-degree wide viewing angles ensure that the image won’t shift in color, contrast, or brightness when you look at the screen at an angle.

Other panel-related specifications include a 350-nit peak brightness and a 1,000:1 static contrast ratio, which is standard for an IPS display at this price range.

The 350-nit luminance is more than enough for a comfortable viewing experience, even in well-lit rooms.

4K UHD resolution on a 27″ screen of the Philips 276E8VJSB results in a pixel density of 163 PPI i.e., pixels per inch. This makes for plenty of screen space as well as amazing detail clarity.

Note that you will need to scale your interface to make small items such as text readable, which will, in turn, decrease the amount of available screen space, but increase the clarity and sharpness of details.

The Philips 276E8VJSB 4K monitor has an exceptionally low input lag of only ~9ms at 60Hz, which makes for no perceptible delays in video games or any other use.

Naturally, being locked to 60Hz/FPS (Frames Per Second) will repulse most PC gamers, especially those who prefer fast-paced games, as they can opt for a lower-resolution/higher refresh rate display at this price range instead.

Keep in mind that 4K UHD is quite demanding even at 60Hz when it comes to the latest PC titles. Add to that the fact that the Philips 276E8VJSB doesn’t feature AMD FreeSync, which would provide a variable refresh rate (VRR) for compatible GPUs, thereby eliminating screen tearing and stuttering, at least within the 40-60Hz/FPS VRR range.

FreeSync would’ve also been quite useful for the Xbox One X, but since most of the console games are locked to 30FPS, and the VRR range of most 4K FreeSync monitors starts from 40FPS anyway, it’s not a big loss.

Moving on, the Philips 276E8VJSB display has a response time speed of 5ms (GtG), which is enough to eliminate any prominent trailing left behind fast-moving objects.

There are four response time overdrive (SmartResponse) modes: Off, Fast, Faster, and Fastest. We recommend using either Fast or Faster as the Fastest option introduces pixel overshoot.

Lastly, the monitor uses DC (direct current) to regulate its brightness intensity, meaning that there’s no flickering, so those sensitive to it don’t have to worry about getting headaches or eye strain after extended periods of using the screen.

The OSD (On-Screen Display) menu of the Philips 276E8VJSB IPS monitor is controlled via the joystick placed beneath the bottom bezel of the screen.

The menu is quite basic, while the OSD joystick is a bit stiff, but the navigation through the settings is still more enjoyable than it’s on most monitors with pressable buttons.

There are many useful features in the OSD menu including Picture in Picture/Picture by Picture, four levels of low-blue light emission filter, the SmartImage pre-calibrated presets (FPS, RTS, Racing, and two customizable Gamer profiles), and the standard picture adjustments including five gamma presets (from 1.8 to 2.2).

The Philips 276E8VJSB has a tilt-only stand by -5°/20°, and it’s not VESA mount compatible while the screen is coated with a low-haze (25%) 3H anti-glare coating which eliminates reflections.

Connectivity options include two HDMI 2.0 ports, a single DisplayPort 1.2 input, and a headphone jack. The monitor supports HDCP 2.2, meaning that you can watch copy-protected content from streaming services such as Netflix in the native 4K UHD resolution.

It’s also available with a VESA mount compatible design as the Philips 278E1A. All other specs and features are identical.

If you can afford something a bit pricier, we recommend having a look at the ASUS VG289Q, which offers a fully ergonomic stand, AMD FreeSync, and wide color gamut for around $300.

If you don’t mind the drawbacks (lack of FreeSync and VESA mount) of the Philips 276E8VJSB, it’s an excellent 4K IPS monitor for the price as it offers a striking picture quality and smooth performance.