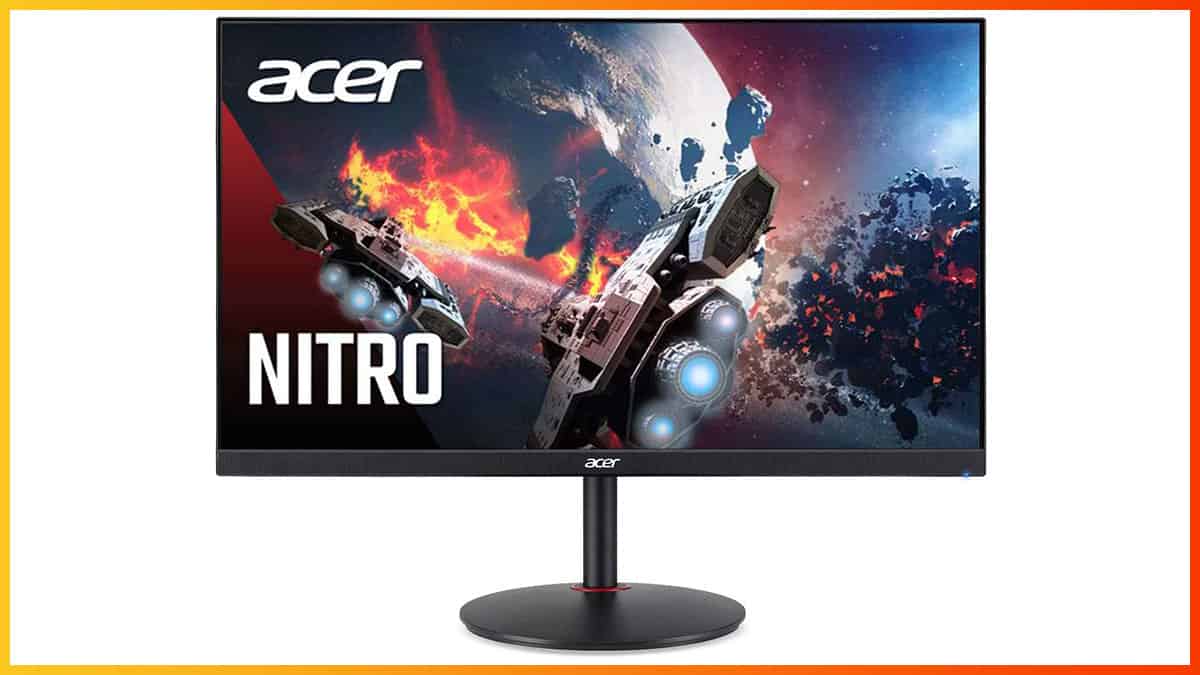 The Acer XV272UX offers stunning and accurate colors thanks to its quantum-dot enhanced IPS panel, while the performance is buttery-smooth due to the high 270Hz refresh rate, rapid response time, and AMD FreeSync support.

Moreover, there are plenty of additional useful features including MBR, a fully ergonomic stand, and rich connectivity options.

The monitor is based on an AHVA (IPS-type) panel by AU Optronics that’s enhanced by quantum-dots for the striking 99% Adobe RGB and ~95% DCI-P3 color gamut; that’s equivalent to ~160% sRGB!

There’s also an sRGB emulation mode that restricts the color output to ~100% sRGB, and the monitor is factory-calibrated at Delta E < 2, making it fit for professional color-critical work.

The picture won’t shift in color or contrast when the screen is looked at an angle thanks to the 178° wide viewing angles.

Moving on, the monitor supports HDR (High Dynamic Range) and has VESA’s DisplayHDR 400 certification. Alas, due to the lack of local dimming and high brightness, you’re not getting the true HDR viewing experience.

Regardless, implementing a proper local dimming solution would significantly increase the monitor’s price. The main accent of the Acer XV272UX is on colors and speed, not HDR.

So, you won’t get quite as deep blacks as that of VA panels with a contrast ratio close to 3,000:1, but you will get more vivid and consistent colors.

Another strong point of the Acer XV272UX is the high pixel density of 108 PPI (pixels per inch), which results in sharp details and text as well as plenty of screen real estate.

As expected, some IPS glow is visible, but nothing extreme. Keep in mind that the amount of IPS glow varies across different units of the monitor.

The Extreme mode is useless as it’s too aggressive and adds a lot of pixel overshoot. It’s just there so that Acer could advertize the quoted 0.5ms GtG pixel response time speed.

Regardless, the Normal mode is fast enough to eliminate any ghosting up to 240Hz (or 270Hz if overclocked) without adding overshoot.

At lower frame rates (48 – 144FPS), however, inverse ghosting becomes noticeable. At ~144FPS, it’s negligible, but the closer you get to ~60FPS, the more apparent it becomes.

Sadly, FreeSync is locked to the Normal overdrive mode.

So, if you find overshoot bothersome when playing games with VRR enabled at ~60FPS, you’ll need to disable FreeSync/G-SYNC Compatible in order to get rid of inverse ghosting.

This means that you’ll get screen tearing, but this visual artifact is hardly noticeable at 240Hz anyway. Alternatively, you can use V-Sync to eliminate tearing and use this trick to minimalize the input lag penalty it causes.

When overclock is enabled in the OSD menu, FreeSync becomes grayed out.

LFC (Low Framerate Compensation) is supported as well, allowing the variable refresh rate to function even below 48FPS by framerate multiplication.

Even though the monitor is not certified as G-SYNC Compatible, VRR works without any issues with compatible NVIDA graphics cards (GTX 10-series or newer).

What’s interesting is that the Acer Predator XB273UGX, which uses the same panel and offers identical specifications (except for the design) as the XV272UX, is officially G-SYNC Compatible.

So, it’s either a marketing thing or the XV272UX will be added to NVIDIA’s G-SYNC Compatible list in time too. Either way, you will not get any VRR-related issues, such as brightness flickering or micro-stuttering.

This technology uses backlight strobing to simulate CRT-like motion clarity, but it sacrifices brightness in the process and it cannot be active at the same time as FreeSync.

It also introduces screen flickering, which is invisible to the human eye, but those very sensitive to it might experience headaches after prolonged use.

There are two VRB modes: Normal and Extreme. The Extreme mode offers better motion clarity but at a higher brightness penalty (~130-nits), whereas ‘Normal’ drops the brightness down to ~270-nits, but the performance is not quite as smooth.

Apart from the standard image adjustment tools such as brightness, contrast, and color temperature, you’ll have access to advanced settings (gamma and 6-axis hue/saturation).

The OSD (On-Screen Display) menu is well-organized and easy to navigate through thanks to the directional joystick at the back of the monitor. There’s also a power button and three hotkeys, two of which can be assigned to certain OSD shortcuts.

The backlight of the monitor is flicker-free (unless VRB is enabled) and there’s a low-blue light filter (the ComfyView picture mode).

The stand of the monitor is fairly sturdy and offers full ergonomic support with up to 120mm height adjustment, 360° swivel, 90° pivot, and -5°/25° tilt

Further, the screen has a matte anti-glare coating that eliminates reflections and 100x100mm VESA mount compatibility.

DSC (Display Stream Compression) allows you to use the monitor up to 270Hz at 1440p with 10-bit color depth without any sacrifice in image quality. This feature is only supported on AMD’s Navi and NVIDIA’s Turing or newer GPUs.

The Acer XV272UX price amounts to $680, which is excellent value for the price.

As previously mentioned, there’s also the Acer Predator XB273UGX model, which is based on the same panel and offers basically identical specifications. The main difference is the Predator branding design, G-SYNC Compatible certification, and a $20 higher price tag.

It has a native G-SYNC module and a higher DisplayHDR 600 certification.

Since the variable refresh rate performance is very good on the XV272UX, there’s no need to get the AW2721D due to G-SYNC – unless you often play games at ~60FPS and want to minimalize tearing or overshoot in those titles.

While the Dell AW2721D offers better HDR image quality, it’s still far from perfect and it’s only great in certain scenarios, for instance, when the dark and bright objects are far apart, due to the limited number of dimming zones.

So, we generally recommend the Acer XV272UX or the Acer XB273UGX over the Dell AW2721D.

Other gaming monitors worth considering at this price range include the Samsung Odyssey G7 with a curved VA panel, the LG 27GN950 4K 144Hz display, and the LG 34GP83A ultrawide model.

The Acer XV272UX is an incredible gaming monitor! It offers absolutely gorgeous colors and impeccable performance. On top of that, it has an excellent design and extensive connectivity options – and it’s reasonably priced.