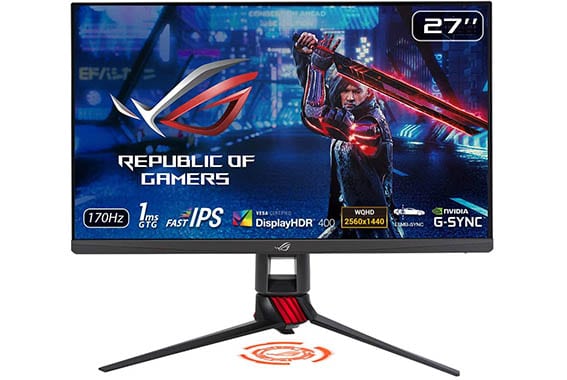 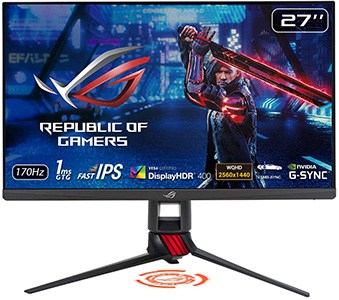 The ASUS XG279Q is a solid 27" 1440p 144Hz IPS gaming monitor with a quick response time speed, wide color gamut, and plenty of additional features such as premium design, 170Hz factory-overclocking, and ELMB-SYNC. Unfortunately, some of these extra features don't live up to the hype yet they increase the monitor's price.

Let’s see how it stacks up against similar alternatives when it comes to image quality, performance, features, and value for the price!

It results in a pixel density of 108 PPI (pixels per inch), which translates to plenty of screen space and sharp details without any scaling necessary.

As expected, the colors are vibrant, precise, and consistent regardless of the angle you’re looking at the screen.

The DCI-P3 gamut can look (to some users) a bit over-saturated for sRGB content, but an emulated sRGB profile is provided as well in case you want to restrict the gamut to ~100% sRGB from the ‘native’ 125% sRGB.

Note, however, that the brightness is locked to 100/maximum in this mode, and you cannot change it. So, the screen might be too bright for you when using the sRGB mode.

Thanks to its wide color gamut and excellent peak brightness that reaches over 400-nits, some HDR content will look noticeably better than SDR, but you’re not getting the true HDR viewing experience.

The monitor even supports local dimming via its ‘Dynamic Dimming’ feature. Sadly, there are only eight dimming zones which are relatively slow and ineffective. You might want to enable it for watching movies, but you’ll mostly prefer it disabled.

All in all, you get a great picture quality with gorgeous colors and crisp details. Blacks aren’t quite pitch-black, which is expected from an IPS panel while HDR content is hit or miss. Some content might look better, some worse.

You can overclock the monitor up to 170Hz by simply increasing its refresh rate in the OSD (On-Screen Display) menu and your drivers/PC display settings.

The ASUS XG279Q boasts a rapid 1ms GtG (gray to gray) pixel response time speed. Naturally, this can only be achieved while using the most aggressive overdrive setting, which introduces too much overshoot (inverse ghosting).

There are six ‘OD’ (overdrive) options in total, from 0 to 5. Levels 4 and 5 add too much inverse ghosting and should be avoided while levels 0 and 1 are too slow and leave visible trailing behind fast-moving objects.

The default setting (level 3) effectively eliminates ghosting without adding too much overshoot, so you should use it at 165Hz+. The level 2 option has less overshoot, but more ghosting, so it’ll work better below 144Hz.

The ASUS XG279Q input lag amounts to only ~4ms, which makes for imperceptible delay.

One thing to keep in mind about IPS monitors is IPS glow, which is an expected drawback of this panel technology. It’s characterized as visible ‘glowing’ around the corners of the screen, similar to backlight bleeding.

The amount of IPS glow varies across different units of the monitor, but in all but most extreme cases, it’s manageable.

Finally, note that the ASUS XG279Q display has a flicker-free backlight and an integrated low-blue light filter, allowing you to go through long gaming sessions without eye strain/headaches.

The OSD menu of the monitor is quite user-friendly and offers a bunch of useful features. Navigation through the menu is a breeze thanks to the joystick at the back of the monitor with three additional hotkeys for shortcuts.

AMD FreeSync is supported with a 48-170Hz variable refresh rate (VRR) range, and the monitor is certified by NVIDIA as ‘G-SYNC Compatible’ for tear-free gameplay with compatible graphics cards.

Unfortunately, this doesn’t work as good in practice because the pixel response time overdrive becomes locked when ELMB or ELMB-Sync is enabled.

Since the locked overdrive mode is too aggressive, you’ll get too much overshoot at lower frame rates. At ~165Hz/FPS, there’s less overshoot, but strobe crosstalk (double images) becomes visible.

Not to mention that it will be quite difficult to maintain consistent ~165FPS at 1440p in most games. ELMB/ELMB-Sync also reduces the monitor’s maximum brightness while active. In any case, you’ll prefer it disabled.

GameVisual modes include FPS, RTS/RPG, MOBA, Racing (the default factory-calibrated mode), Scenery, sRGB, and User. The GamePlus feature has a new ‘Sniper’ mode that zooms in a small area around your crosshair. 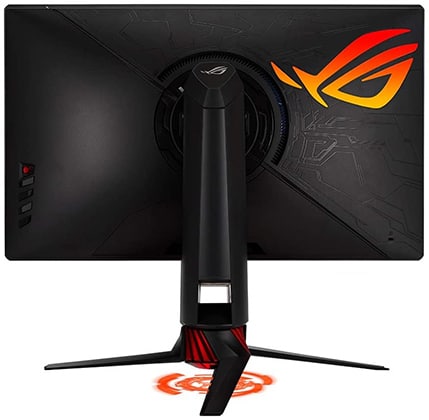 The XG279Q features ASUS’ standard ROG flashy gamer-inspired design with the Light In Motion logo projector, the AuraSync RGB lighting at the back, and the ‘3-side borderless’ thin bezels.

The screen has a matte anti-glare coating with a slightly grainy surface, but the picture is overall very clear. Basically, you’ll only be able to notice the somewhat grainy effect if you’re really looking for it on a completely white background.

It has a better response time performance with less ghosting and overshoot (better overdrive implementation), a wider color gamut (98% DCI-P3 / 135% sRGB), and an sRGB mode with adjustable brightness.

The LG 27GL850 doesn’t have a backlight strobing technology nor local dimming, but those two features on the ASUS XG279Q don’t work very well anyway.

Further, its design cannot swivel to the left/right, and there’s no RGB lighting, but many users will actually prefer the cleaner look of the LG.

Next, the LG 27GL850 doesn’t have a factory-overclocked refresh rate, but, as we’ve already said, the difference between 144Hz and 170Hz is not that noticeable.

Besides, you could manually overclock the LG if you really wanted to. Still, just how far you’ll be able to overclock, it will depend on each unit of the monitor individually.

So, a very good unit of the LG 27GL850 can have a higher contrast ratio than a bad unit of the ASUS XG279Q, but this difference is not really noticeable. In essence, both IPS models have grayish blacks in comparison to a VA panel.

If you want deep and vivid blacks, you’ll need to go with a VA panel gaming monitor, which has downsides of its own such as a slower pixel response time speed.

Overall, the ASUS XG279Q offers a great picture quality thanks to its rich colors and high resolution while the performance is buttery-smooth thanks to FreeSync, quick response time, and high refresh rate.

Unfortunately, some of the premium features quickly add up to the price yet they’re not really necessary or even good which makes the LG 27GL850 a much better and cheaper option.

Having said that, the ASUS XG279Q is a lot better than the IPS models which use the previous-generation AUO AHVA panels or the IPS panels by Innolux – both of which are noticeably slower.

So, in case the LG 27GL850 is unavailable or you happen to get a good deal on the ASUS XG279Q, it’s definitely worth considering!