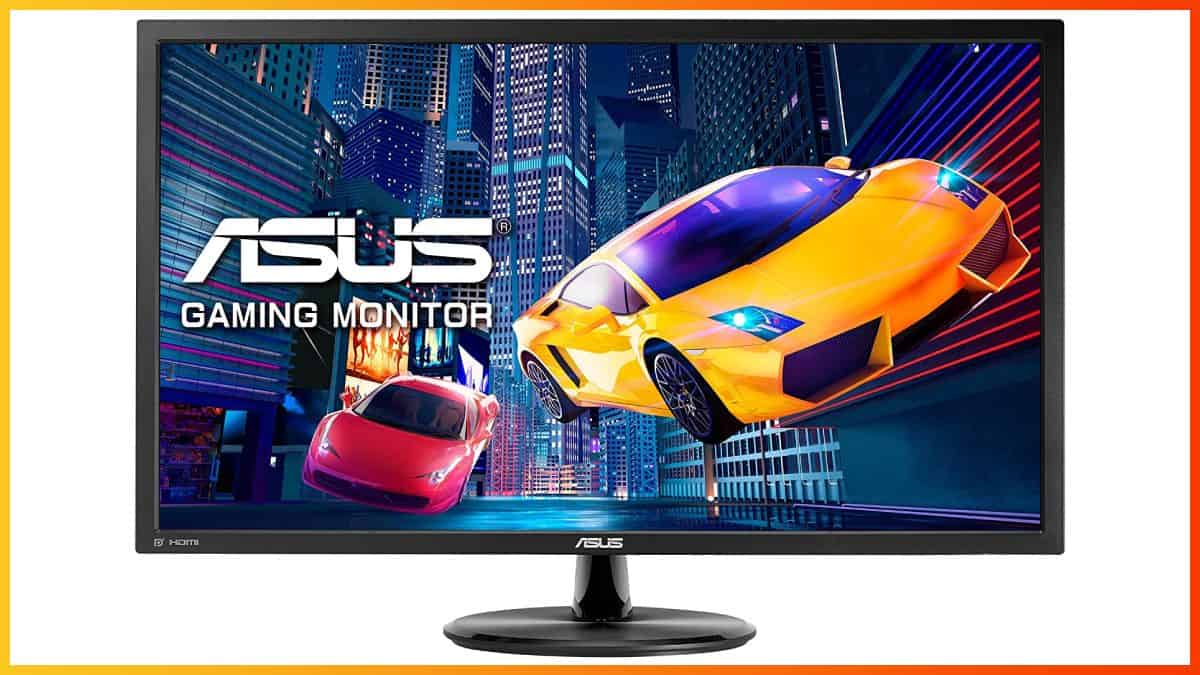 The ASUS VP28UQG is an affordable 28″ 4K monitor with a quick response time speed, low input lag, and plenty of gaming features including FreeSync over HDMI.

Looking for a 4K monitor for your PS4 Pro? The ASUS VP28UQG is the best budget 4K 60Hz display for competitive console gaming; it’s affordable, fast, and offers plenty of gaming features.

However, if you’re looking for a monitor for competitive gaming on the PS5 or Xbox, you should look for a model that supports 120Hz.

Keep in mind that the ASUS VP28UQG 28″ monitor features a TN (Twisted Nematic) panel which unlike other monitor panel technologies such as IPS and VA has got narrow 170°/160° viewing angles.

This means that the picture will change in color, contrast and color when it’s viewed from different angles.

However, since this monitor is 28″ in size, and you’ll always be sitting directly in front of it when gaming, the viewing angles won’t be an issue.

Another aspect where TN panels fall short is color reproduction.

In comparison to other panels types, TN panels have the least vibrant and accurate colors; however, they have the fastest pixel response time speed; so it’s a fair trade-off if you’re into competitive gaming and have a limited budget.

More importantly, thanks to the 4K UHD resolution, the image will be clear and sharp with vivid and clean details.

Other panel-related specs include a 300-nit peak brightness, 10-bit color depth via dithering, and a 1,000:1 static contrast ratio, all of which is standard at this price range.

Thanks to its rapid 1ms response time speed, there’s no ghosting or motion blur of fast-moving objects, which makes for buttery-smooth and enjoyable fast-paced gameplay.

In addition, the ASUS VP28UQG input lag performance is top-notch at just below 10ms.

The screen is flicker-free and has an integrated low blue light filter, so you won’t have to worry about eye strain even after prolonged gaming sessions.

Moving on, the ASUS VP28UQG 4K monitor supports AMD FreeSync, which can further improve the gaming experience if you own an AMD graphics card or an Xbox One/S/X console.

FreeSync works by synchronizing the monitor’s refresh rate to the GPU’s frame rate, which consequently eliminates problems with screen tearing and stuttering without introducing any perceptible input lag.

The ASUS VP28UQG FreeSync range is 40-60Hz/FPS (Frames Per Second), so when your FPS is below 40, FreeSync won’t do anything until the framerate is back up within the dynamic range.

Further, the ASUS VP28UQG supports HDCP 2.2, so you can stream content from Netflix, Amazon Video, etc. in 4K UHD.

You will also find the GamePlus feature, which consists of customizable crosshair overlays, an on-screen timer, and an FPS counter.

The OSD (On-Screen Display) menu is rather user-friendly and easily navigatable, using the 5-way joystick placed at the backside of the monitor.

Connectivity includes two HDMI 2.0 ports, DisplayPort 1.2, and a headphones jack. So, you can simultaneously connect two consoles and a PC, and just alter the input source on the monitor.

The ASUS VP28UQG price is usually around $250, making it one of the cheapest 4K gaming monitors.

For ~40 extra, you can get the ASUS VP28UQGL, which is the same monitor, but with a fully ergonomic design.

However, for ~$50 more, you can get the ASUS VG289Q with an IPS panel. While it has a slightly slower response time speed, the difference is barely noticeable, but it has much more vibrant colors and wider viewing angles for an overall more enjoyable gaming experience.

For highly competitive gamers, we recommend a 120Hz monitor. Depending on your budget and console, you should choose the appropriate model in our best PS5 and Xbox Series X/S console monitors buyer’s guide.

While the ASUS VP28UQG does offer smooth performance and plenty of useful features, there are better alternatives at this price range.