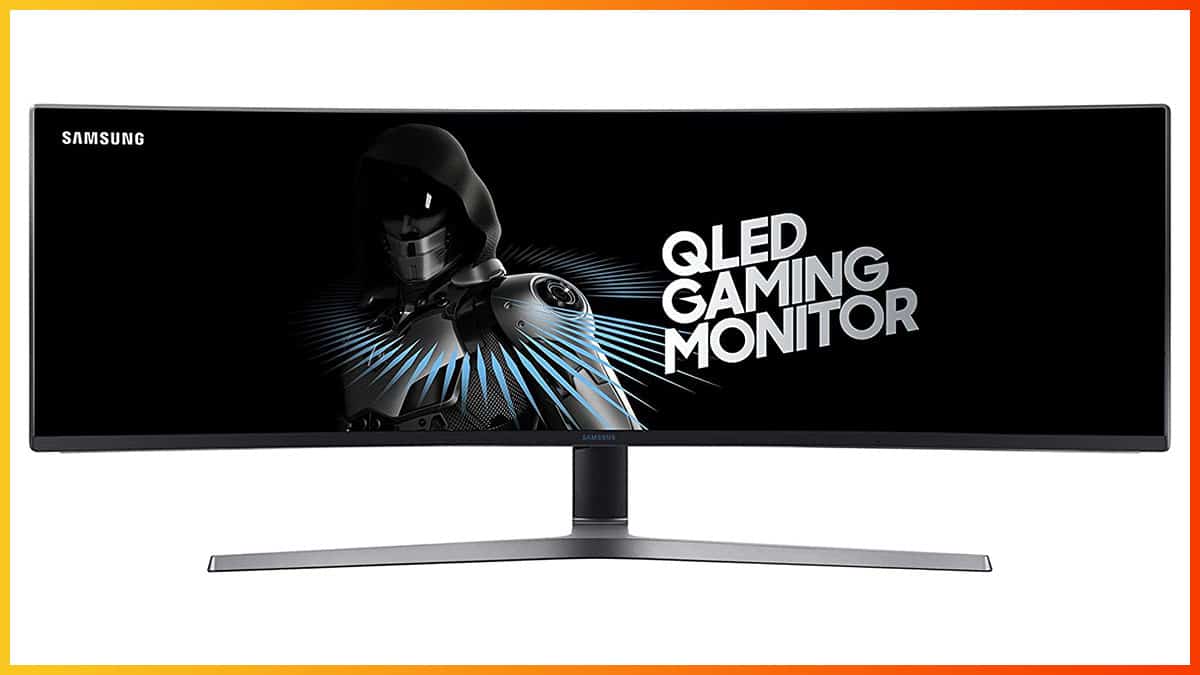 Its huge screen with high contrast and vibrant colors makes for an immersive viewing and gaming experience, but its somewhat low resolution for the size might repulse some gamers. Those with a bit weaker PC specs might find the resolution to be totally acceptable.

Samsung’s C49HG90 gaming monitor was the first 49″ 32:9 display available. It’s the predecessor to the popular Samsung CRG9 and the Samsung Odyssey G9.

The CHG90 model is now cheaper than ever and its resolution is much easier on your system than the 5120×1440 resolution of the newer variants.

This makes the monitor more appealing to those with limited budgets and weaker PC configurations.

Based on Samsung’s VA (Vertical Alignment) with a high 3,000:1 static contrast ratio, the CHG90 delivers deep and inky blacks. In fact, blacks on IPS and TN monitors with a 1,000:1 contrast ratio look grayish in comparison.

Further, it uses a quantum-dot enhanced backlight, which allows it to achieve a wide 95% DCI-P3 color gamut (equivalent to ~125% sRGB) for more vibrant and lifelike colors.

Thanks to its strong 600-nit peak brightness, the monitor can also get very bright allowing it to bring out the details in highlights of the picture, such as explosions.

So, even though you aren’t getting the ‘true’ HDR viewing experience, which requires an expensive full-array local dimming solution, there’s an obvious improvement in HDR picture quality, but as there are only 10 dimming zones, some scenes will look better than others.

Related:Is An HDR Gaming Monitor Worth It?

The main downside of the monitor, as far as the image quality is concerned, is the somewhat low 3840×1080 resolution.

This 49″ sized monitor is equivalent to two 27″ 1080p monitors put side by side, just without the bezels in between. You also get the same pixel density as that of a Full HD 27″ monitor, which amounts to 81 PPI (pixels per inch).

So, you get less screen real estate and the details won’t be particularly sharp, but if you sit a bit further from the screen, this won’t be a big problem in video games.

In fact, at around 3.5 ft (or ~107cm), your eyes won’t be able to distinguish individual pixels on the screen. Applying anti-aliasing will also greatly help make the picture sharper.

The Samsung CHG90 input lag amounts to only ~4ms, which makes for imperceptible delay.

Its pixel response time speed performance is not as quick though. Dark pixels take longer to transition into lighter shades, resulting in noticeable smearing behind fast-moving objects in darker scenes.

This is the case with most VA panel gaming monitors, but unless you’re primarily a competitive FPS gamer, it’s mostly negligible or tolerable.

The monitor supports AMD FreeSync Premium Pro, which provides you with tear-free gameplay by synchronizing the monitor’s refresh rate with your GPU’s frame rate.

You can also use FreeSync with compatible NVIDIA cards (GTX 10-series or newer) over DisplayPort. The variable refresh rate (VRR) range amounts to 48-144Hz when the ‘Ultimate’ mode is selected; the ‘Standard’ option is limited to 120-144Hz.

MBR eliminates motion blur by backlight strobing, but it sacrifices the maximum brightness in the process and it cannot be active at the same time as FreeSync.

To enable MBR, your refresh rate must be set to at least 100Hz. In order to prevent image duplications, your frame rate should be as close to the maximum refresh rate selected as possible. So, at 100Hz, it’s best to cap your frame rate to 100FPS, and then use either the Faster or Fastest mode according to your preference.

This also means that if you want to use FreeSync, you’re left with the Standard option, which is well-optimized for 144Hz, but at lower frame rates (and therefore lower refresh rate), the overdrive is too aggressive thereby introducing minor inverse ghosting.

So, at lower FPS (Frames Per Second), you might want to disable FreeSync for clearer motion at a cost of allowing screen tearing to occur, but thanks to the monitor’s high 144Hz refresh rate, tearing won’t be that noticeable.

Note that some units of the Samsung CHG90 are also affected by the FreeSync brightness flickering issue.

With the 1025 firmware (or newer), there’s the VRR Control option that fixes the brightness flickering issue with FreeSync/G-SYNC Compatible, but it can introduce some micro-stuttering as a side effect.

To access and navigate the OSD (On-Screen Display) menu, there’s a directional joystick beneath the bottom bezel of the screen.

There’s also an sRGB mode, which clamps the 125% gamut to ~100% for a more accurate sRGB color output. Just how accurate this mode is, however, varies across different units of the monitor.

You’ll also be able to find the Eye Saver mode, which filters out harmful low-blue lights.

Alas, the monitor is not completely flicker-free as it uses PWM (Pulse-Width Modulation) to regulate brightness at a flickering frequency of 433Hz. So, if you’re sensitive to flickering, prolonged use of the monitor might cause you headaches.

Further, the screen has a 1800R curvature for added immersion, there are blue LEDs at the back of the monitor, the bezels are ultra-thin, and there’s a matte anti-glare coating that eliminates reflections.

Of course, if you have a powerful enough PC rig to run the latest games at a decent frame rate and picture settings, you should invest in the Odyssey G9 model as it has a significantly higher refresh rate and faster response time than the CRG9 model.

Even though a new monitor should last you at least a few GPU upgrades, if you’ve just gotten a new graphics card or don’t plan to buy a new one in a while that could comfortably fuel the 5120×1440 resolution, the Samsung CHG90 is still a solid alternative if you want that kind of viewing/gaming experience.

Note that there are other excellent gaming monitors to be considered at that price too. Visit our best gaming monitor buyer’s guide for more deals and information.

Overall, the Samsung CHG90 offers an exciting viewing and gaming experience at a reasonable price.

However, at this price range, you can also get a gaming monitor without some of its big issues, such as slow response time, imperfect VRR performance, and low pixel density.

If these things are worth the sacrifice for the 49″ super-ultrawide experience to you, then the Samsung CHG90 is worth considering.