The LG 34WK95U is the first ultrawide monitor with a 5120×2160 screen resolution which in addition to the wide color gamut and HDR support makes this display the dream monitor for content creators.

The LG 34WK95U-W is the first ultrawide monitor with a 5120×2160 screen resolution; it’s aimed at those looking for a premium 21:9 picture quality.

Such high resolution on a 34″ screen of the LG 34WK95U results in a pixel density of 163 pixels per inch which is equivalent to 4K UHD on a 27″ display.

The monitor is based on LG’s nano IPS panel which boasts 98% coverage of the DCI-P3 color gamut (135% sRGB) for stunning color quality and accuracy.

Other panel-related specs are similar to the previous-generation IPS technology and include a 450-nit peak brightness, a 1,200:1 static contrast ratio, dithered 10-bit color depth (8-bit + FRC), and 178-degree viewing angles.

In addition, the LG 34WK95U supports HDR which will provide you with a boost in maximum luminance to 600-nits for compatible content.

Although the monitor lacks proper local dimming for the optimal HDR viewing experience, you still get a notable improvement over the standard image quality; in fact, the LG 34WK95U ultrawide monitor has VESA’s DisplayHDR 600 certification.

We didn’t find any dead pixels nor excess backlight bleeding and IPS glow on our unit, and although the brightness uniformity could be a bit better, it’s more than acceptable.

Further, the display is factory-calibrated and delivers impeccable color accuracy straight out of the box.

In the OSD (On-Screen Display), you will find plenty of features and settings including the advanced 6-axis and gamma (four profiles) adjustments.

The monitor has dedicated picture presets for both HDR and SDR viewing modes (Custom, Vivid, and Cinema) as well as the HDR Effect feature which simulates HDR for non-compatible content.

You also get the On-Screen Control software which allows you to adjust most of the OSD-related settings in a desktop app rather than in the menu. 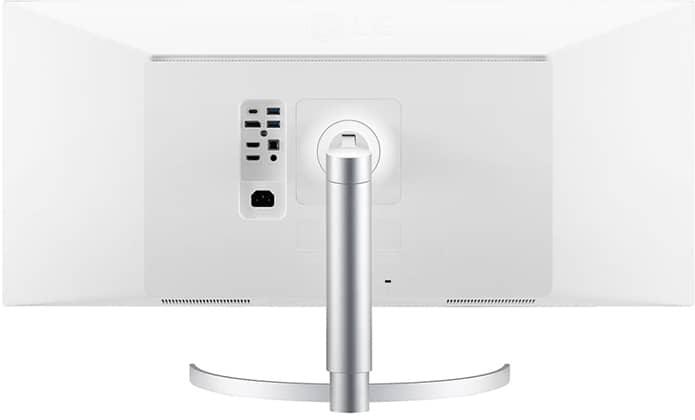 While connectivity options are abundant, there is a catch. There are two HDMI 2.0 ports, but HDMI 2.0 will limit you to 3440×1440 resolution.

So, for 5120×2160, you will need to use either the DisplayPort 1.4 or the ThunderBolt 3 port (USB-C) but you’ll need to make sure that your device supports Intel’s Titan Ridge Thunderbolt 3 with up to 40 Gbps.

Other ports include a headphones jack, an audio line-in for the 2x5W built-in speakers, and a dual-USB 3.0 hub.

The design of the LG 34WK95U monitor is simple but modern with thin bezels, a height-adjustable stand (up to 110mm), tilt, and VESA mount compatibility.

The LG 34WK95U price is around $1,300 which is reasonable considering its cutting-edge specifications.

On Amazon, you will also find the LG 34BK95U-W model which is the same monitor but with a different warranty.

Thanks to its stunning image quality with vibrant colors, crisp details, and extensive screen space, the LG 34WK95U will spark the imagination of any content creator – given that they have a compatible and powerful enough device.