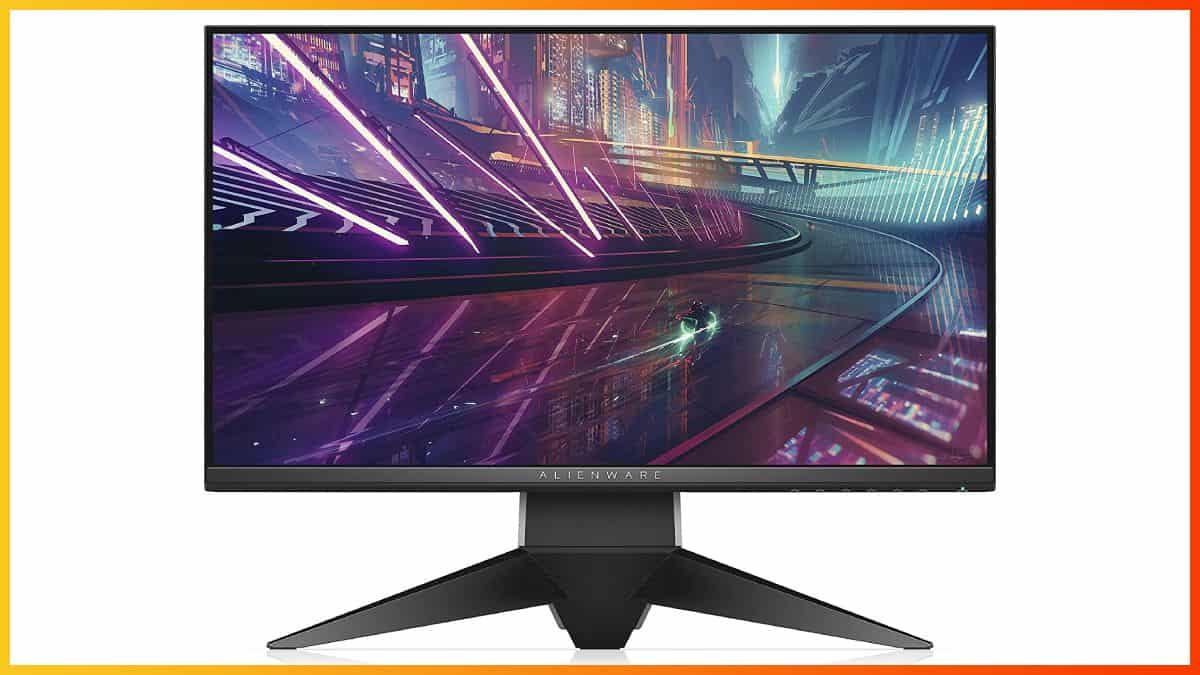 The Dell Alienware AW2518HF delivers flawless performance and plenty of useful features including AMD FreeSync and a premium design quality. Its image quality, on the other hand, is underwhelming considering the price.

The Dell AW2518HF features a TN panel developed by AU Optronics; the same panel is used in most 24.5″ 240Hz gaming monitor models.

As expected, the viewing angles amount to 170° vertically and 160° horizontally, meaning that the colors will shift in tone when the screen is viewed from certain angles i.e., too far from the side or above/below.

For a competitive gamer, though, this won’t cause a lot of issues since you’ll mainly be sitting directly in front of the screen.

Overall, the measured contrast ratio is a bit shy of the specified 1,000:1, but the brightness performance is perfect as it peaks a bit over 400-nits with consistent and uniform luminance.

Dell’s well-known for its premium image quality, and the image straight out of the box didn’t disappoint.

The colors are also decent for a TN panel, but not nearly as vibrant as they are on IPS or VA panel monitors.

The 240Hz vs. 144Hz dilemma is more and more frequently brought up among competitive gamers. In short, the difference is certainly apparent – but not as apparent as it is between 60Hz and 144Hz.

On the other hand, if you are a hardcore or a professional gamer and want every millisecond of advantage you can get, you will definitely want a 240Hz monitor.

The deal-breaker for most users is that the Dell AW2518HF 240Hz gaming monitor features the standard 1920×1080 resolution and a TN panel, which, with the performance put aside, provides an inferior image quality to even some cheaper displays.

The Dell AW2518HF input lag performance is flawless at only ~3ms of imperceptible delay.

If you have a FreeSync-compatible graphics card, you can synchronize the refresh rate of the Alienware AW2518HF to your GPU. This allows for a dynamic refresh rate, which will eliminate screen tearing and stuttering without significantly increasing the input lag.

Moreover, the OSD menu is intuitive and easily navigated via the six OSD buttons placed at the bottom bezel of the screen.

While the menu is not open, four of these buttons can be used as hotkeys for certain functions. You can assign them to any shortcut under the ‘Personalize’ section.

Other useful features include Dark Stabilizer and Game Enhance Mode.

The former brightens up the screen (3 levels), so you can more easily spot enemies in dark areas while the latter consists of three functions: an on-screen timer, an FPS counter, and Display Alignment for multitasking.

The Dell Alienware AW2518HF FreeSync monitor offers a first-class quality design with ultra-thin bezels and a steady metal tripod stand under which you can conceal the cables.

At that price range, we highly recommend the ViewSonic XG2431 instead. It has an IPS panel that’s just as fast, but also offers much better colors and wider viewing angles. On top of that, it has an impressive backlight strobing implementation.

The Dell AW2518HF is an overall decent gaming monitor, but there are much better alternatives around this price range.