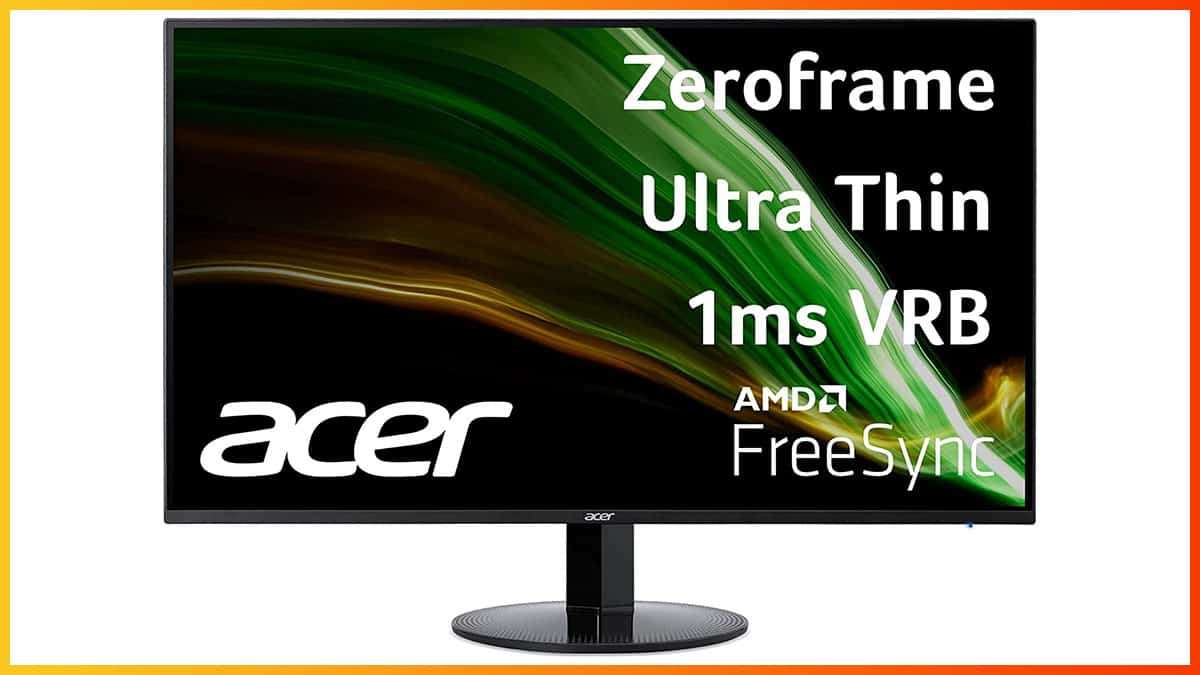 The Acer SB241YA is a decent budget monitor, but there are a lot of similar displays available around this price range too, so be sure to consider all the options!

The Acer SB241YA is an affordable 24″ 1080p VA monitor with FreeSync over HDMI support up to 75Hz, making it a good option for gamers on a budget.

Note that there are a few versions of the Acer SB241Y in the SB1 series:

The model in this review is the Acer SB241Y Abi, which we’ve shortened to SB241YA.

Based on a VA (Vertical Alignment) panel, the Acer SB241Y A offers a high 3,000:1 static contrast ratio for deep blacks. Indeed, IPS monitors, which usually have a contrast ratio of around 1,000:1, have grayish blacks in comparison!

On top of that, there’s no IPS glow, which along with the high contrast ratio makes for a more immersive viewing experience, especially in dark rooms.

However, VA monitors don’t have quite as wide viewing angles as IPS panels. You will be able to notice minor gamma and saturation shifts on the Acer SB241YA at certain angles, but it’s not an issue for everyday use.

If you do color-critical work, then IPS is the way to go due to better image consistency.

The Acer SB241YA monitor covers 72% of the NTSC color space, which is equivalent to around 100% sRGB gamut size. This doesn’t mean that it covers 100% of the sRGB color space as there will be undercoverage at some places and extending beyond the gamut at other places.

Overall, the sRGB coverage will vary from unit to unit, but you can expect around 95% sRGB color space coverage, which is expected from a budget monitor and the difference between 95% and 100% sRGB coverage is not really noticeable.

It can get more than bright enough under normal lighting conditions, but if you’re in a particularly bright room (studio lights, screen facing a big window, etc.), it won’t be able to get bright enough to mitigate glare, in which case you’ll need to dim the lights or get a brighter screen.

The 1920×1080 Full HD resolution results in a decent pixel density of 92 PPI (pixels per inch) on the 23.8″ viewable screen of the monitor. You get reasonably sharp text and fine details without having to use any scaling. In comparison, a 27″ monitor with Full HD resolution looks noticeably worse with pixely details (.

Since the monitor only has HDMI and VGA ports, VRR only works with compatible AMD Radeon GPUs and Xbox consoles.

VRR synchronizes the monitor’s refresh rate to GPU’s frame rates and thus prevents screen tearing at imperceptible input lag penalty. So, as long as your frame rate is within the supported range, you won’t get any screen tearing. Below 48FPS, VRR stops working until your FPS recovers.

Using CRU (Custom Resolution Utility), you might be able to extend the range to ~40-75Hz, however, your mileage will vary depending on your unit.

A 75Hz refresh rate provides a small but noticeable boost in motion clarity as opposed to 60Hz displays, but in order to actually feel the difference, you must also be able to maintain 75FPS!

There are three response time overdrive modes: Off, Normal and Extreme. We recommend leaving this option at ‘Normal’ for the best performance.

While VA monitors usually have noticeable ghosting behind fast-moving objects, 75Hz doesn’t require the pixels to change as fast as higher refresh rates, so there won’t be nearly as much ghosting or dark-level smearing on the SB241YA.

Input lag performance is excellent as well with ~10ms of delay, which is imperceptible.

The monitor also supports VRB (Visual Response Boost), which uses backlight strobing to reduce perceived motion blur at a cost of picture brightness, but it can’t be active at the same time as FreeSync.

Finally, the backlight of the monitor is flicker-free (unless VRB is enabled) and there’s a low-blue light filter mode.

Beneath the bottom bezel of the screen, you will find a power button and five hotkeys for navigation through the OSD (On-Screen Display) menu.

The stand of the monitor is tilt-only and the screen is not VESA mount compatible, but it has a matte anti-glare coating against reflections.

Connectivity options include one HDMI 1.4 port (75Hz) and a VGA port (60Hz). Note that the product image for the SB241Y Abi on Amazon shows audio jacks, but this model doesn’t have any!

Acer’s SB0 and SB1 series consists of many budget 1080p 75Hz monitors with similar names, so here’s a quick summary:

For gamers, we highly recommend getting a 144Hz display, which can often be found for under $150. Be sure to check out our best monitors under $150 guide for more information.

Overall, the Acer SB241YA is a decent budget monitor, but there are plenty of similar options at this price range, so to get the best value for your money, check out which models are on sale. For gamers, we highly recommend investing in a 144Hz display though!