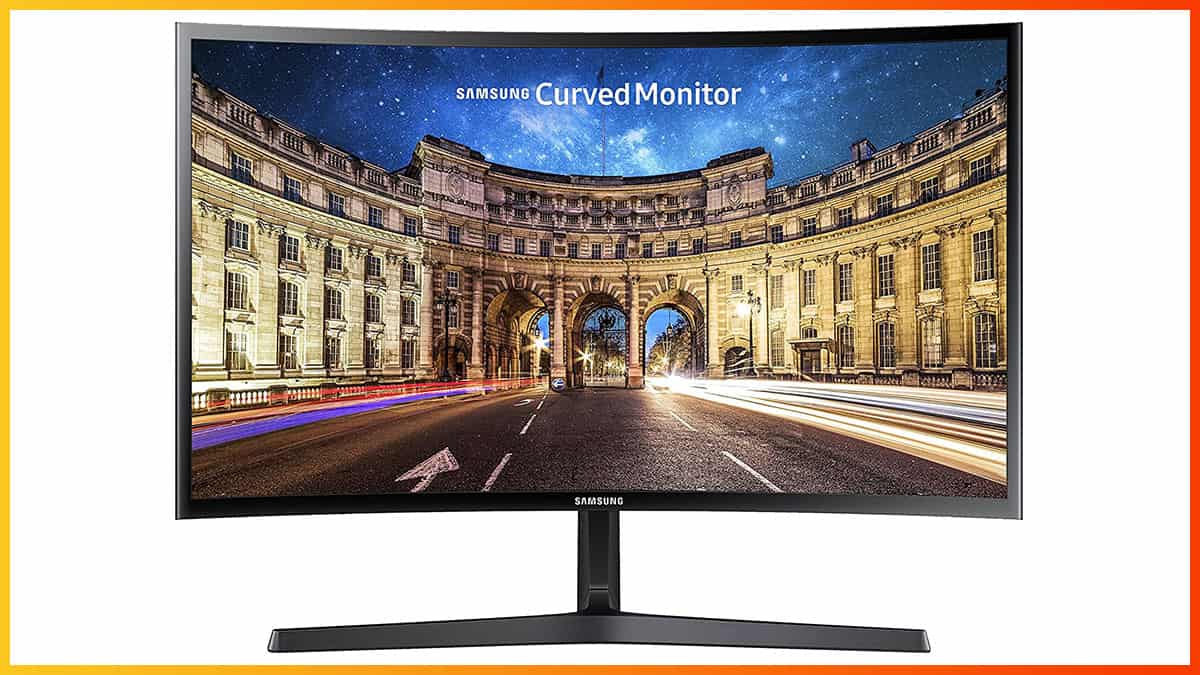 The Samsung C27F398 is an overall decent monitor for casual gaming and video entertainment thanks to its big 27″ curved screen, high contrast ratio and FreeSync up to 72Hz. However, there are better alternatives available for the price.

Based on a VA panel, the strongest point of the Samsung C27F398 is the high 3,000:1 static contrast ratio, resulting in deep and inky blacks.

This makes the monitor particularly great for playing games and watching videos in a dark room where the high contrast ratio emphasizes details in shadows and darker scenes.

Further, it has a 72% NTSC color gamut, which is equivalent to around 100% sRGB gamut size, and it supports true 8-bit color depth without dithering for 16.7 million colors.

However, the monitor doesn’t cover the entire sRGB color space; there’s some undercoverage and some extension over the sRGB gamut, but the colors are rich overall.

While the colors are not washed out nor over-saturated, there are monitors with significantly larger color gamuts at this price range, which we’ll get into later.

Next, the Samsung C27F398 has a peak brightness of 250-nits, which is minimal as far as modern LED-backlit displays go, but under normal lighting conditions, the screen can get more than bright enough.

If you plan on using the monitor in a particularly bright room without any blinds/curtains, the screen might be too dark for you even at its maximum brightness setting though.

Such pixel density is not ideal for spreadsheets and office-related work due to the limited amount of screen space and detail/text clarity. However, for gaming and other multimedia use, it’s acceptable.

Finally, VA monitors have 178° wide viewing angles meaning that the image will remain perfect at almost any angle. There are no major shifts in gamma/contrast at skewed angles like it’s the case with TN panels.

In comparison with IPS monitors, some gamma/saturation shifts are detectable on the Samsung CF398 at extreme angles, but it’s negligible.

The monitor has a low input lag of around 10ms, which makes for imperceptible delay between your actions and the result on the screen.

Further, it has a maximum refresh rate of 72Hz that provides a small but noticeable boost in motion clarity in fast-paced video games (as long as you get 72FPS – frames per second).

The monitor has a pixel response time speed of 4ms GtG (gray to gray pixel transition). Since it has a maximum refresh rate of only 72Hz, most pixel transitions can keep up with the refresh cycle, so there’s not as much ghosting behind fast-moving objects as it’s usually associated with high refresh rate VA monitors.

There are three overdrive options: Standard, Faster and Fastest. For the best motion performance, we recommend using the ‘Faster’ mode since ‘Fastest’ can add overshoot (inverse ghosting).

The backlight of the monitor is flicker-free and there’s a mode (Eye Saver) with a low-blue light filter, allowing you to use the screen for hours without eye strain/fatigue.

The OSD (On-Screen Display) menu of the monitor is well-organized and easy to use thanks to the directional joystick beneath the bottom bezel of the screen.

AMD FreeSync is supported as well. This technology allows the monitor to change its refresh rate dynamically, according to GPU’s frame rates.

The dynamic refresh rate range of the Samsung CF398 is 48-72Hz. As long as your frame rate stays within that range, there will be no screen tearing or stuttering.

FreeSync is supported over both HDMI and DisplayPort on this monitor, but you will need a compatible graphics card, which includes most AMD GPUs and GTX 10-series or newer NVIDIA GPUs over DisplayPort only.

Using CRU, you might be able to extend the VRR range to ~ 40-75Hz, though this will vary from unit to unit.

The stand of the monitor is sturdy, but it’s tilt-only by -4°/24°. Luckily, the screen is VESA mount compatible via the 75x75mm pattern.

Connectivity options include DisplayPort 1.2, HDMI 1.4 and a headphone jack.

For casual gaming and everyday multimedia use, the Samsung C27F398 is an overall decent monitor. However, you can find a better display at the same price.