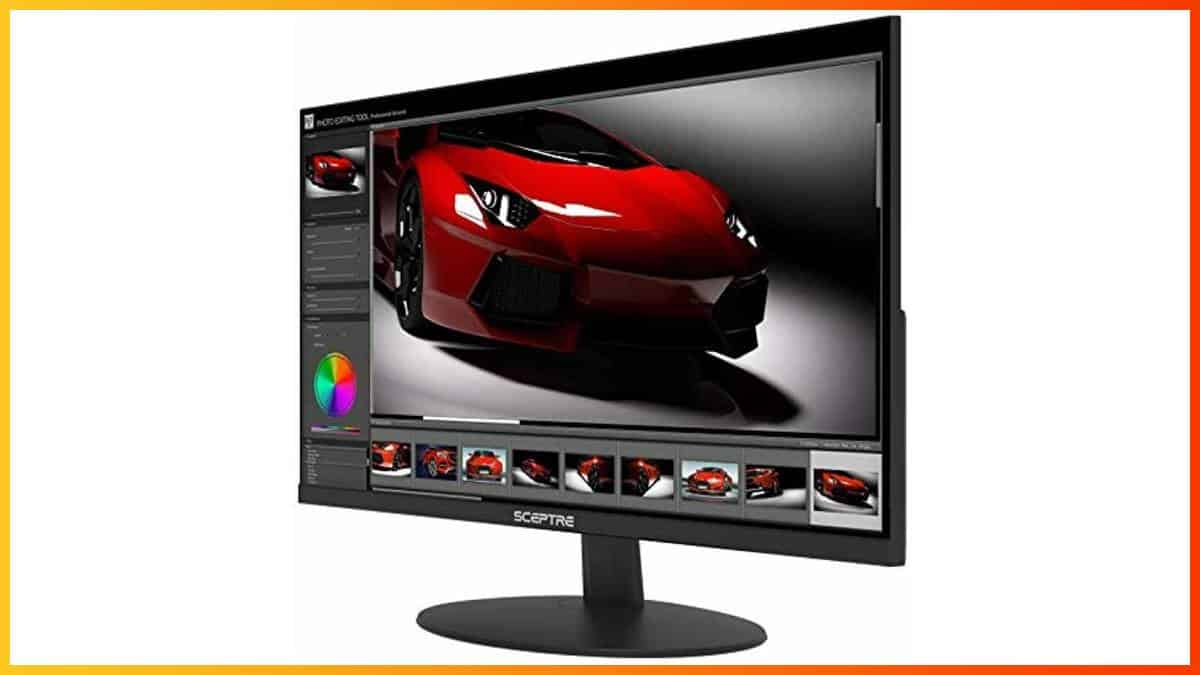 The Sceptre E205W-16003R is an overall good monitor for the price thanks to its decent pixel density, VESA mount compatibility, good connectivity options, and AMD FreeSync up to 75Hz. However, there are many newer models available nowadays that offer a lot better image quality and performance for only a slightly higher price.

The Sceptre E205W-16003R is one of the most economical monitors available at the time of this writing! So, let’s see what exactly do you get with it, and what you’re missing out on.

While this resolution is rather low by today’s standards, it looks great on the Sceptre E205W-16003R monitor due to its small screen size. You get a pixel density of 94.14 PPI (pixels per inch).

So, in terms of detail clarity and screen space, you’re getting a similar experience as 1920×1080 on 24″ sized monitors.

Now, the Sceptre E205W-16003R is based on a TN (Twisted Nematic) panel. This panel technology suffers from poor viewing angles (170° horizontally and 160° vertically).

So, when looking at the screen off-axis, the image will shift in color, contrast, and brightness. As long as you’re directly in front of the screen though, this won’t be an issue.

TN panels also have inferior image quality to IPS and VA panels. The colors won’t be as vivid or consistent as they are on IPS monitors while the blacks won’t be as deep as that of the VA technology.

Other panel-related specifications include a 250-nit peak brightness, a static contrast ratio of 1,000:1, and 8-bit color depth support for 16.7 million colors which is standard for all monitors at this price range.

Moving on, the Sceptre E205W-16003R input lag amounts to only ~10ms. This is the measured delay between your actions and the time the monitor takes to react and display your commands – there’s no visible delay.

The response time speed amounts to 5ms (GtG – gray to gray pixel transition), which translates to no prominent trailing behind fast-moving objects.

For the best pixel response time performance, make sure that the Overdrive setting in the monitor’s OSD (On-Screen Display) menu is enabled.

Furthermore, the monitor’s 75Hz refresh rate provides a subtle but noticeable boost in motion clarity in comparison to the standard 60Hz.

The Sceptre E205W-16003R is completely flicker-free as it doesn’t use PWM to regulate brightness. What’s more, it has an integrated low-blue light filter that prevents eye fatigue when using the monitor for extended periods of time.

AMD FreeSync is supported over the two HDMI ports on the monitor.

This technology allows the monitor to change its refresh rate according to GPU’s frame rates as long as your FPS (Frames Per Second) is between 48 and 75.

Within this variable refresh rate range, FreeSync will eliminate all screen tearing and stuttering. Below 48FPS, it stops working until your FPS recovers. You will also need a compatible AMD GPU.

You will also find advanced adjustments such as gamma and 6-axis hue/saturation.

The OSD menu is simple and easy to navigate by using the four hotkeys placed at the back of the monitor.

The stand of the monitor is tilt-only, but you can mount the screen on a third-party stand using the 75x75mm VESA pattern. A screwdriver and other mounting tools are provided with the monitor, too!

We highly recommend investing an additional $5 – $15 for the Acer SB220Q, which has a slightly larger screen with a higher 1080p resolution. It also has an IPS panel with much wider viewing angles and better colors.

While the Sceptre E205W-16003R is an overall good monitor for the price, there are a lot better models available nowadays that are only a tad more expensive.