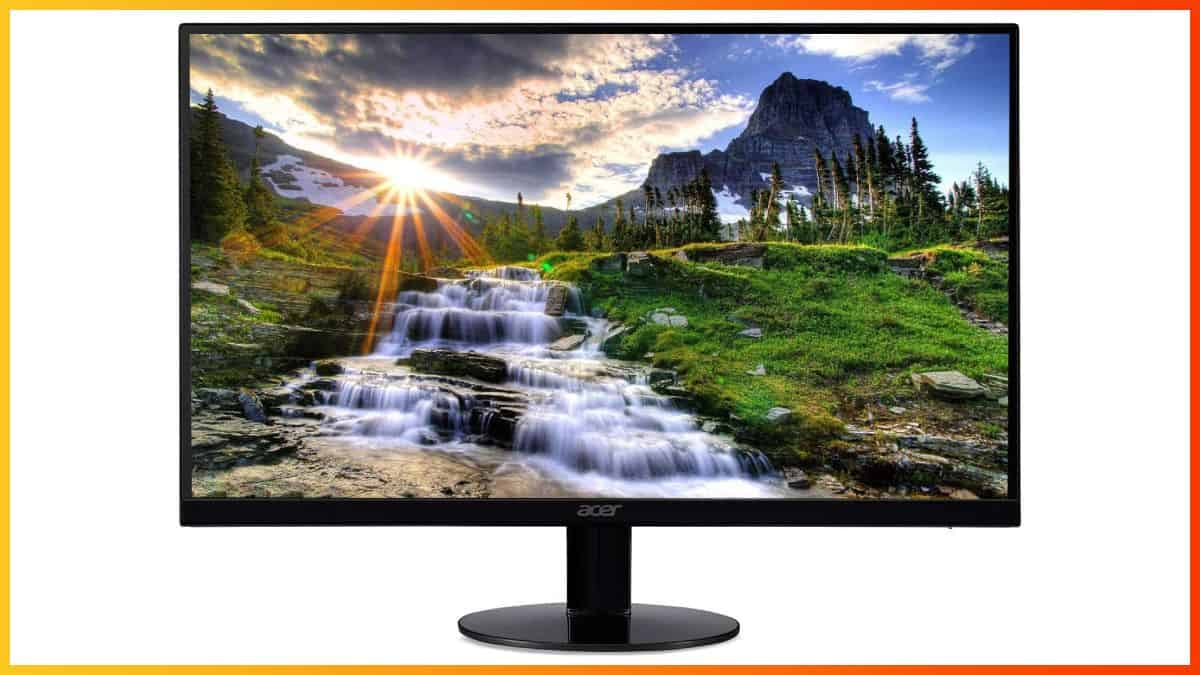 The Acer SB220Q offers an amazing image quality and performance for its (MSRP) price thanks to its IPS panel, 1080p resolution, AMD FreeSync, 75Hz refresh rate, and numerous gaming features. It also boasts a modern slim design with ultra-thin bezels!

Looking for the best gaming monitor under $100? Look no more, because we present to you the Acer SB220Q, which features an IPS panel for vibrant colors, Full HD resolution for clear image quality, and AMD FreeSync up to 75Hz for flawless performance.

Furthermore, the monitor boasts a slim design with ultra-thin bezels and offers additional exclusive gaming features. All of that under $100! You may also see this monitor labeled as ‘Acer SB220Q bi’.

The Acer SB220Q monitor is based on an IPS panel that delivers accurate, consistent, and intense colors that will breathe life into games, movies, and everything else you’re watching, when compared to the usual monitors with TN panels you can find at this price range.

Another thing that makes the IPS panel superior to TN and VA panels is the viewing angles of 178 degrees, both horizontally and vertically, which ensure that the picture won’t shift in color and contrast when it’s viewed from skewed angles.

Although the Acer SB220Q is a bit smaller in size when compared to the popular 24-inch budget variants, there is an upside to it; since the screen is smaller, the screen resolution will have a more dense pixel count making the picture clearer with more details and screen space.

Moving on, the Acer SB220Q IPS monitor has a response time speed of 4ms, which may not be as quick as that of a TN panel display, but it’s more than enough to eliminate most of ghosting and motion blur in fast-paced games.

In a nutshell, the response time speed is not an issue when gaming, and neither is input lag with a top-level performance of ~10ms.

Although the jump to 75Hz from 60Hz is not nearly as impactful as going to 144Hz, it’s certainly noticeable. If you can’t tell the difference, try playing at 75Hz/FPS for a while, and then switch back to 60Hz and see for yourself!

If you have an AMD FreeSync-compatible graphics card, you can synchronize its frame rate to the refresh rate of the Acer SB220Q. Once you enable FreeSync, the monitor will change its refresh rate dynamically according to the GPU’s performance.

This will eliminate all screen tearing and stuttering without significantly increasing input lag.

The Acer SB220Q FreeSync range within which the dynamic refresh rate functions is 48-75Hz/FPS (Frames Per Second), meaning that if your FPS drops below 48, FreeSync won’t work until the frame rate increases again.

In case you have an NVIDIA card, you can still use the monitor up to 75Hz but without the dynamic refresh rate as there’s no DisplayPort input.

In addition to the standard picture adjustments in the OSD (On-Screen Display) menu, such as contrast, brightness, gamma, and color settings, you will find extra features for gaming purposes.

Next, ‘Black Boost’ increases visibility in dark parts of video games, and ‘Over Drive’ further improves the response time speed with three settings: Off, Normal, and Extreme.

Note that if you enable FreeSync, you won’t be able to select the Extreme overdrive mode, but luckily, the ‘Normal’ mode works just fine.

Finally, there are three pre-calibrated picture presets for Action, Racing, and Sports types of games as well as a customizable gaming profile.

Just like most modern displays, the Acer SB220Q 75Hz gaming monitor is flicker-free and has a built-in low blue light filter, so you won’t get eye fatigue or headaches from looking at the screen for a prolonged time.

The Acer SB220Q features a 0.24-inch thin design with the ZeroFrame ultra-thin bezels, which makes the monitor look more expensive. Due to its thin bezels and low price, it’s also a great display for a multi-monitor gaming setup.

Unfortunately, the monitor isn’t VESA mount compatible, and you can only tilt the screen as far as ergonomics are concerned. Connectivity includes an HDMI 1.4 port and a VGA port.

The Acer SB220Q price amounts to only ~$90 making it one of the best monitors under $100 due to its stunning image quality, smooth performance, modern design, and selection of gaming features.

The Acer SB220Q is also available as the Acer HA220Q, which is the same monitor, but with a different stand. It’s also tilt-only and not VESA-compatible, it just looks different.

Acer’s SB0 and SB1 series consists of many budget 1080p 75Hz monitors with similar names, so here’s a quick summary:

If you’re looking for something a bit better, check out the ASUS VA24DQ.

It’s a 24″ 1080p monitor with FreeSync up to 75Hz, a DisplayPort input (therefore allowing FreeSync to be used with compatible NVIDIA cards) and a VESA mount compatible stand.