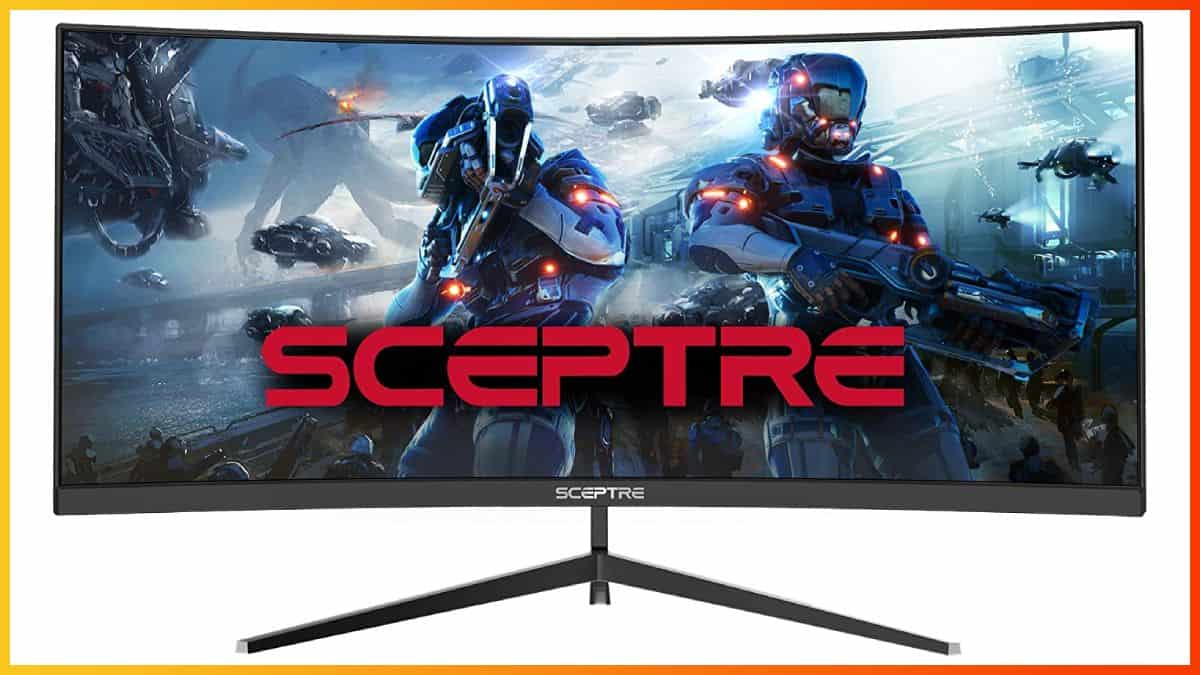 The Sceptre C305B-200UN1 provides a high contrast ratio for deep blacks, an ultrawide resolution for added immersion, and AMD FreeSync up to 200Hz for buttery-smooth performance.

The Sceptre C305B-200UN1 is an affordable ultrawide gaming monitor yet it features a fast 200Hz refresh rate! Here’s everything you need to know about this display.

In comparison to IPS ultrawides, you don’t get as vibrant or accurate colors. Still, you do get a higher contrast ratio, which makes for deeper blacks and a more vivid relation between the brightest and the darkest shades.

The colors look good on the Sceptre C305B-200UN1 nonetheless, it’s more than bright enough under normal viewing conditions, and it’s a real treat when playing content in a dark room where you can really take advantage of the monitor’s high contrast ratio.

Further, the 2560×1080 screen resolution results in a high pixel density of 94.19 PPI (pixels per inch) when displayed on the 29.5″ viewable screen of the Sceptre C305B, which makes for plenty of screen space and sharp text and details without any scaling necessary.

Note that the monitor is as tall as a regular 23″ 16:9 monitor, which may take some time to get used to as the monitor can seem too wide for its height.

In comparison, a 34″ ultrawide monitor is as tall as a 27″ monitor and can, therefore, deliver a more immersive viewing experience.

However, there are two things to consider when it comes to comparing the Sceptre C305B-200UN1 to similar 34″-35″ ultrawides.

First of all, a 34″ ultrawide with a 2560×1080 resolution has a much lower pixel density, so details and text won’t be as sharp and clear, but rather a bit pixelated.

Alternatively, you could get a 34″ 3440×1440 ultrawide monitor, but these displays don’t only cost more, they’re also a lot more demanding on your CPU/GPU, especially for higher frame rates.

So, the Sceptre C305B-200UN1 offers the perfect balance between screen resolution and size, and it’s a great budget option for those who cannot afford more expensive models and/or better PC rig.

We were pleasantly surprised by the monitor’s pixel response time performance. It was not a smear-fest we were expecting from an inexpensive 200Hz VA panel.

Most VA panels are known for inferior response time, especially when it comes to transitioning of dark pixels, which results in noticeable black smearing of fast-moving objects.

Naturally, at 200Hz, there’s visible trailing behind fast-moving objects, which is more obvious when dark pixels are involved, but it’s tolerable.

You can also set the monitor to 144Hz. At this refresh rate, there’s less ghosting.

So, depending on the game you’re playing and your FPS (Frames Per Second), you’ll be able to find the perfect settings.

In undemanding and competitive games, you can take advantage of the full 200Hz refresh rate, and if the trailing becomes too noticeable, you can dial it back to 144Hz.

The Sceptre C305B-200UN1 input lag amounts to just below 5ms, which makes for imperceptible delay even at 200Hz.

Naturally, for strictly competitive FPS gaming, a 240Hz gaming monitor with a much faster response time is preferred, and you can even get one at this price range.

The Sceptre C305B-200UN1 is more suited for those who prefer immersion over sheer performance in competitive games, but it’s also great for casual multiplayer gaming, watching movies, and even office-related work due to the extra horizontal screen space the 21:9 ratio provides.

You can check a list of all games that support 21:9 here. For content that doesn’t support 21:9, you will have to choose between having black bars at the sides, zooming/cropping, or stretching out the picture to fill the screen.

Compatible content such as 21:9 movies provide a more cinematic viewing experience, whereas, in video games, you’ll get an extended field of view for more immersive gameplay.

As it’s the case with all LED-backlit monitors, some backlight bleeding is expected, and while this varies between different units of the monitor, our Sceptre C305B unit had no excessive backlight bleed.

As long as your FPS is within this range, the monitor will change its refresh rate dynamically and thus eliminate all screen tearing and stuttering with minimal (~1ms) input lag penalty.

FreeSync also works with compatible NVIDIA cards without any issues. Sadly, some units are affected by the VRR brightness flickering issue.

In addition to the power button, there are four hotkeys beneath the bottom bezel at the right side of the monitor, which you can use to navigate the OSD (On-Screen Display) menu.

The menu itself isn’t pretty, but it has all the tools you will need, including the standard brightness, contrast, and RGB settings, as well as the advanced hue/saturation and gamma alterations.

Other useful features include pre-calibrated picture presets including FPS and RTS modes, Picture in Picture/Picture by Picture, Blue Light Shift, which filters out the harmful low-blue lights, and response time overdrive (on/off).

The design of the monitor is decent considering its price; the stand is sturdy, but it’s tilt-only. You can, however, mount the screen on a third-party stand using the provided 75x75mm VESA adapter.

At the back of the monitor, there are two red LED strips that you can disable in the OSD menu. The monitor has a curvature of 1800R, which is subtle but noticeable at 30″.

Note that there’s 1/4″ of black border around the screen, so the image is not edge-to-edge, which is standard for ‘borderless’ monitors.

All in all, the Sceptre C305B is an excellent gaming monitor for the price. It provides an immersive viewing experience as well as smooth performance for a very attractive price. However, if you don’t want to deal with potential VRR brightness flickering and ghosting in dark scenes, be sure to check out the MSI MAG301RF.