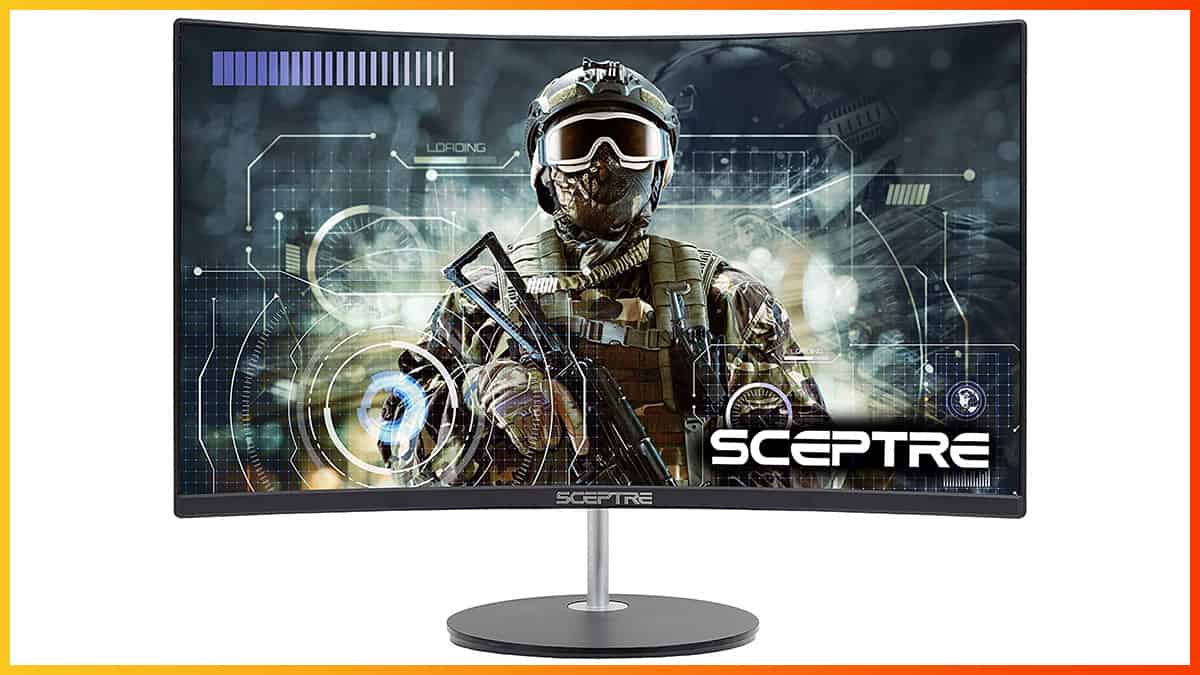 The Sceptre C275W-1920RN is a budget 27″ monitor based on a curved VA panel with 1080p resolution and 75Hz. At this price range, however, you can get a 24″ monitor with a higher 144Hz refresh rate, AMD FreeSync support, and higher pixel density.

The Sceptre C275W-1920RN is one of the best-selling budget monitors, mostly because it offers a 27″ sized curved screen at an affordable price.

However, some of its other specifications are not as appealing.

The monitor is based on a curved VA (Vertical Alignment) panel, which boasts a high 3,000:1 static contrast ratio for deep blacks and bright whites. Indeed, in comparison with IPS and TN panel displays with a usual contrast ratio of 1,000:1, blacks on the Sceptre C275W-1920RN are much darker, resulting in more vivid details in shadows of the picture.

Further, with 100% sRGB gamut coverage and true 8-bit color depth support, you get accurate and vivid colors, though due to the viewing angles of VA technology, some gamma and saturation shifts are noticeable at certain angles.

This means that you shouldn’t use the Sceptre C275W for color-critical work, but it’s perfectly fine for other use, including basic content creation.

The peak brightness amounts to 250-nits, which is minimal as far as modern LED-backlit monitors go, but still plenty under normal lighting conditions.

You’ll most likely want to reduce the brightness out of the box, especially if you’re using the screen in a dim-lit or dark room. In case your desk is next to a big window without any blinders or curtains, you might find the maximum brightness to be lacking.

The Sceptre C275W-1920RN monitor features the Full HD resolution, which is still considered as the standard. However, due to its 27″ screen size, the image won’t look as crisp as it would on a smaller monitor, such as 24″, which is a more common screen size for this resolution.

Basically, you get ~82 PPI (pixels per inch), as opposed to ~92 PPI of a 24″ 1080p monitor, so the picture will be somewhat pixely and you might find the amount of screen real estate insufficient if you plan on doing some work with spreadsheets or multiple applications open at the same time.

For everyday use, such as gaming, watching videos, web surfing, etc., most people won’t mind the lower pixel density.

Moving on, the monitor has a maximum refresh rate of 75Hz, which provides a subtle but noticeable boost in motion clarity in fast-paced games. It also makes screen tearing slightly less visible when your frame rate (FPS) exceeds the 75Hz refresh rate.

While the difference between 60Hz and 75Hz is noticeable, it’s nowhere near as game-changing as 144Hz.

So, if you play a lot of games and your frame rate is above at least 90FPS, we highly recommend getting a 144Hz gaming monitor instead – which you can find at this price range.

The Sceptre C275W-1920RN has a quoted response time speed of 8ms (GtG – Gray to Gray pixel transition) and no overdrive settings.

You might notice some minor smearing behind fast-moving objects, mostly in dark scenes with dark to bright pixel transitions, but for everyday use and casual gaming, it’s not an issue.

Input lag, on the other hand, is perfect at ~10ms of delay, which is imperceptible.

Sadly, the monitor does not support AMD FreeSync.

The backlight of the monitor is flicker-free and there’s a low-blue light filter feature called ‘Blue Light Shift’ in the OSD (On-Screen Display) menu of the monitor.

At the rear of the monitor, you’ll find the power button and four hotkeys for navigation through the OSD menu.

The menu looks outdated and adjusting the settings can feel clumsy, but at least you can find some tools that are not available even on certain high-end displays, such as gamma and hue/saturation.

The stand of the monitor is fairly sturdy and offers tilt by -5°/15°. You can also detach the screen from the base and mount it via the 75x75mm pattern.

The bezels are ultra-thin at the top and at the sides of the monitor and the screen has a matte anti-glare coating that eliminates reflections.

While the Sceptre C275W-1920RN is advertised as ‘edge-less’, there is a 10mm black border around the top and side bezels before the image begins.

Although all ‘bezel-less’ and similarly advertised displays have some sort of black border around the bezels, it’s usually not thicker than 5mm.

The screen has a curvature of 1800R for slightly added immersion.

Connectivity options include one HDMI 1.4 input, one VGA port, a headphones jack, and two 2W speakers for basic sound output. Any cheap dedicated stereo system will sound a lot better than these integrated speakers, as expected.

At this price range, you can get a 24″ 1080p 144Hz gaming monitor with a curved VA panel, FreeSync, and wide color gamut – the C24G1A, or with an IPS panel for more vibrant colors, wider viewing angles, and faster response time, such as the AOC 24G2. You can also find 27″ variants of these monitors for ~$200.

While the Sceptre C275W-1920RN is an overall decent monitor, there are much better models available at this price range.