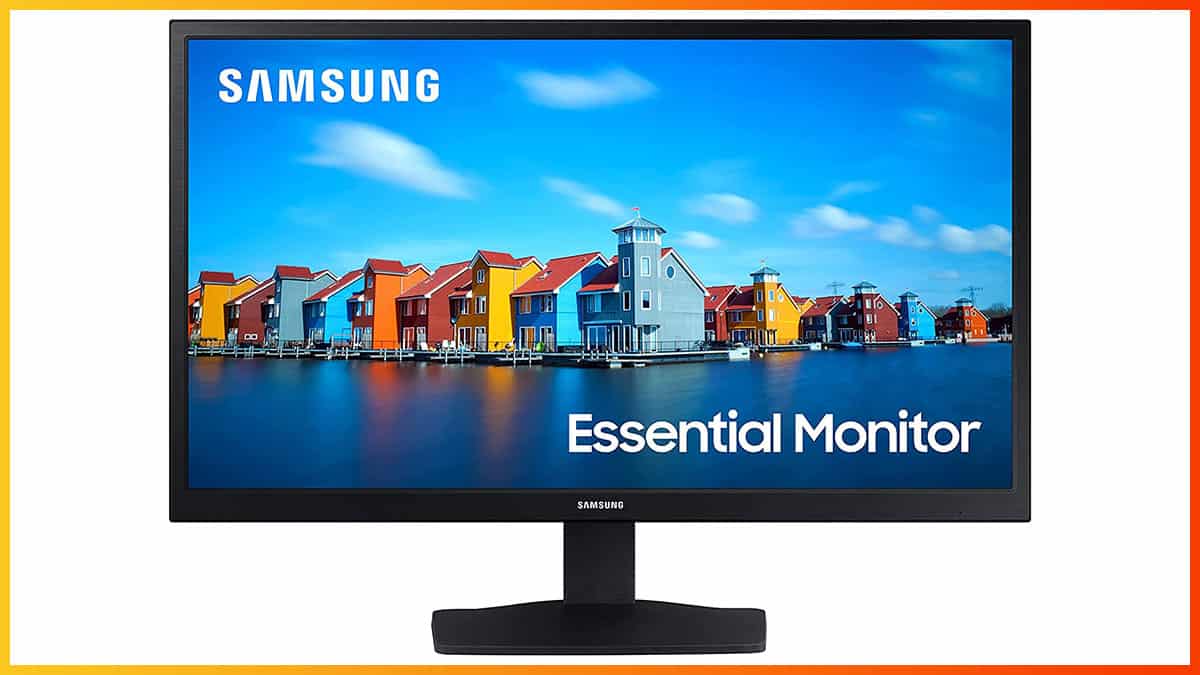 The Samsung S33A is an affordable 24″ 1080p monitor with a high contrast ratio thanks to its VA panel. However, its missing some features that are avaialble in similarly priced alternatives.

The Samsung S24A336 is yet another budget 24″ 1080p monitor. Let’s see how it compares to similarly priced models.

Based on a VA (Vertical Alignment) panel, the Samsung S33A boasts a high static contrast ratio of 3,000:1. As a result, you get deep and inky blacks as well as a strong relation between the darkest blacks and the brightest whites.

IPS and TN monitors at this price range have a contrast ratio of 1,000:1, making for grayish blacks in comparison. Further, VA displays don’t suffer from IPS glow and don’t have as narrow viewing angles as TN panels.

The viewing angles on the Samsung S24A336 monitor still aren’t quite as wide as that of IPS technology, so you might notice some minor shifts in gamma and contrast, but only when viewing the screen at particularly skewed angles.

Next, the monitor has a peak brightness of 250-nits, which is the minimum as far as modern LED-backlit displays go.

Under normal lighting conditions, the screen will be able to get more than bright enough. However, if you’re in a room with strong ambient lighting, it might be too dim to mitigate glare even at its highest brightness setting.

The Samsung S24A336 covers 72% of the NTSC color space, which is equivalent to around 100% sRGB gamut size; this doesn’t mean that the monitor will cover 100% of the sRGB color space.

Depending on the unit, its gamut coverage can extend a bit over the sRGB color space at some places. In contrast, there can be some under-coverage too.

Overall, you end up with around 95% sRGB gamut coverage, which results in fairly accurate colors without over-saturation.

Moving on, the Full HD resolution provides you with a pixel density of roughly 92 PPI (pixels per inch) on the 24″ screen of the Samsung S33A. You get a decent amount of screen space, while details and text are reasonably sharp. 27″ monitors with the same resolution have notably less screen real estate and detail clarity.

Another upside is that 1080p is considerably less demanding to drive than higher resolutions, allowing you to maintain higher frame rates in video games with a decent entry-level GPU.

The Samsung S24A336 has a maximum refresh rate of 60Hz, which will disappoint most gamers. There are plenty of similarly priced budget monitors that offer at least 75Hz – and even this small 15Hz boost in refresh rate is noticeable.

Further, it doesn’t support a variable refresh rate (VRR), so you will have to rely on V-Sync to prevent screen tearing in games.

Input lag is low (around 10ms), so at least you won’t be able to notice any delay between your actions and the result on the screen.

VA monitors at this price range have slow pixel transitions from black to gray, causing noticeable smearing behind fast-moving objects in dark scenes.

Since the Samsung S24A336 has only 60Hz, most pixels will change in time with the refresh rate, so ghosting won’t be that noticeable in other brighter scenes.

The backlight of the monitor is completely flicker-free and there’s an integrated low-blue light filter (Eye Saver Mode).

At the rear of the monitor, there’s a directional joystick (also serves as the power button) for easy navigation through the OSD (On-Screen Display) menu.

Apart from the standard image adjustment tools (brightness, contrast, color temperature, aspect ratio, etc.), you also get access to some advanced settings, such as sharpness and gamma.

Further, it’s worth noting that the Samsung S33A supports Auto Source Detection, allowing it to automatically switch to a detected input.

The stand of the monitor is fairly sturdy, but it’s tilt-only (-5°/21°). Luckily, you can easily mount the screen to a third-party stand via the 75x75mm VESA pattern.

The screen has a matte anti-glare coating which prevents reflections but adds a bit of graininess to the image.

Connectivity options include one HDMI 1.4 port and one VGA (D-Sub) input.

For gamers, we recommend investing at least $20 more in a 144Hz gaming monitor for much better performance, such as the Philips 242E1GSJ or the AOC G2490VX.

Ideally, you should save up at least $170 for the AOC 24G2 with an IPS panel for faster response time and a wider color gamut.

If you just want a 24″ monitor for everyday use, the Samsung S24A336 is a decent choice. However, be sure to check out our best monitors under $150 guide for our up-to-date recommendations.

Overall, the Samsung S33A is an okay budget monitor, but there are better options at this price range.