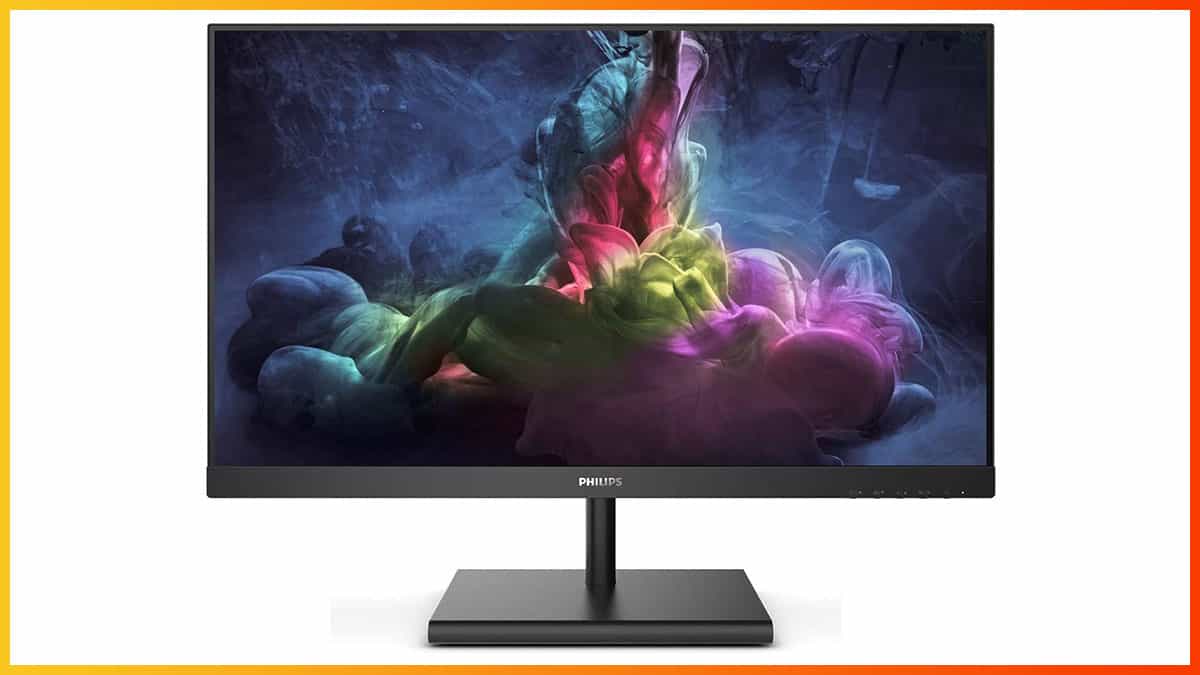 The Philips 242E1GSJ is the cheapest 144Hz gaming monitor you can get! What’s more, it features a wide color gamut support, a high contrast ratio, and AMD FreeSync. Sadly, it has a slow response time speed, so it’s not suited for fast-paced competitive gaming.

The Philips 242E1GSJ is one of the most affordable 144Hz gaming monitors, allowing you to take advantage of your GPU’s high frame rates for a smoother gaming experience.

Moreover, it offers a high contrast ratio and a wide color gamut for immersive picture quality. However, it has a rather slow pixel transition speed, which will make it unappealing to fast-paced and competitive gamers.

The monitor is based on a 23.8″ flat-screen VA panel, most likely developed by CSOT (a sub-company of TCL).

The more common 1080p 144Hz VA models are based on Samsung’s curved VA panels, which have a bit lower 3,000:1 contrast ratio, a 250-nit peak brightness, and an optional wide color gamut backlight – depending on the monitor model/manufacturer.

In truth, there’s no big difference in contrast ratio and brightness between these two panels.

A 250-nit peak brightness is more than enough under normal lighting conditions, but if you prefer to have your monitor next to a big window without any curtains/blinds, the brighter 350-nit model will suit you better.

What is noticeable, however, is the difference in pixel response time speed as Samsung’s panels are faster and therefore have less noticeable trailing behind fast-moving objects.

As a result, you get fairly crisp details and text, as well as a decent amount of screen real estate. The image won’t look as pixelated as it does on 27″ 1080p monitors. Basically, you get the same pixel density as that of 32″ 1440p displays.

As expected, there’s some backlight bleeding and VA glow, but this varies across different units of the monitor.

Now, as we’ve mentioned, the pixel response time speed is quite slow on the Philips 242E1GSJ. There are four response time overdrive modes (labeled as SmartResponse): Off, Fast, Faster, and Fastest.

Even the Fastest mode doesn’t push the pixels fast enough to eliminate trailing behind fast-moving objects as you’re stuck with prominent smearing and motion blur in fast-paced games, especially in darker scenes.

The Fastest mode also introduces pixel overshoot, so it’s best to stick with the ‘Faster’ setting.

This is common for most VA panel displays, but these 23.8″ flat-screen models are particularly slow despite the same 4ms GtG quoted response time speed, so avoid them if you play a lot of FPS games or if you’re sensitive to ghosting.

While the monitor is not officially certified as G-SYNC Compatible by NVIDIA, you can use FreeSync with compatible GeForce GPUs (GTX 10-series or newer) over DisplayPort and gain a variable refresh rate for tear-free gameplay.

However, as it’s the case with most VA panel monitors, some units might suffer from VRR brightness flickering when your FPS (Frame Per Second) fluctuates a lot or sits around the LFC threshold.

Alternatively, you can use the MPRT feature which sacrifices picture brightness for smoother motion clarity by backlight strobing. FreeSync and MPRT cannot be simultaneously active, though.

You can adjust the backlight strobing intensity by adjusting the MPRT setting in the OSD (On-Screen Display) menu from 0 to 20. While motion is a bit clearer in this mode, it’s still not good enough for an enjoyable fast-paced gaming experience.

Moreover, MPRT can cause other artifacts such as strobe crosstalk (double image effect). So, in many cases motion will be worse with this feature enabled.

The Philips 242E1GSJ input lag is very low at around ~5ms, so you won’t be able to notice any delays between your actions and the result on the screen.

There are five hotkeys beneath the bottom bezel at the right side of the monitor, including a power button and four buttons for OSD menu navigation.

While the menu is inactive, you can use these buttons as shortcuts for quick brightness adjustment, input source selection, and SmartImage mode selection.

Under color temperature settings, you’ll also find the sRGB mode, which limits the color output to ~100% sRGB for a more accurate representation of sRGB content. However, just how accurate this mode is will depend on the individual unit of the monitor.

The base of the monitor is quite sturdy, but you only get tilt adjustment by -5°/20° as far as the ergonomics go. Luckily, you can detach the stand and mount the screen using the 100x100mm VESA pattern.

The monitor has ultra-thin bezels at the top and at the sides while the bottom bezel is a bit thicker. You won’t have any issues with reflections as the screen is coated with a matte anti-glare coating.

Connectivity options include one HDMI 1.4 port, one DisplayPort 1.2 input, and an audio line-out port for headphones or external speakers.

The Philips 242E1GSJ is also available as a 27″ sized variant, the Philips 272E1GSJ, but we don’t recommend it due to its lower pixel-per-inch ratio and higher price.

Finally, keep in mind that these two monitors go by alternate names: Philips 272E1GAJ and Philips 242E1GAJ in some regions.

They have a different stand design, but the image quality, performance, and features are the same.

We recommend the LG 24GQ50F instead. It goes for the same price but has better-implemented overdrive for less ghosting. Around this price range, you should also consider the AOC C24G1A with a curved panel and IPS variants, such as the Gigabyte G24F2.

The Philips 242E1GSJ offers excellent image quality, but its performance is disappointing. Thanks to its affordable price though, some gamers might turn a blind eye to the slow response time speed – that excludes competitive players and those sensitive to ghosting.