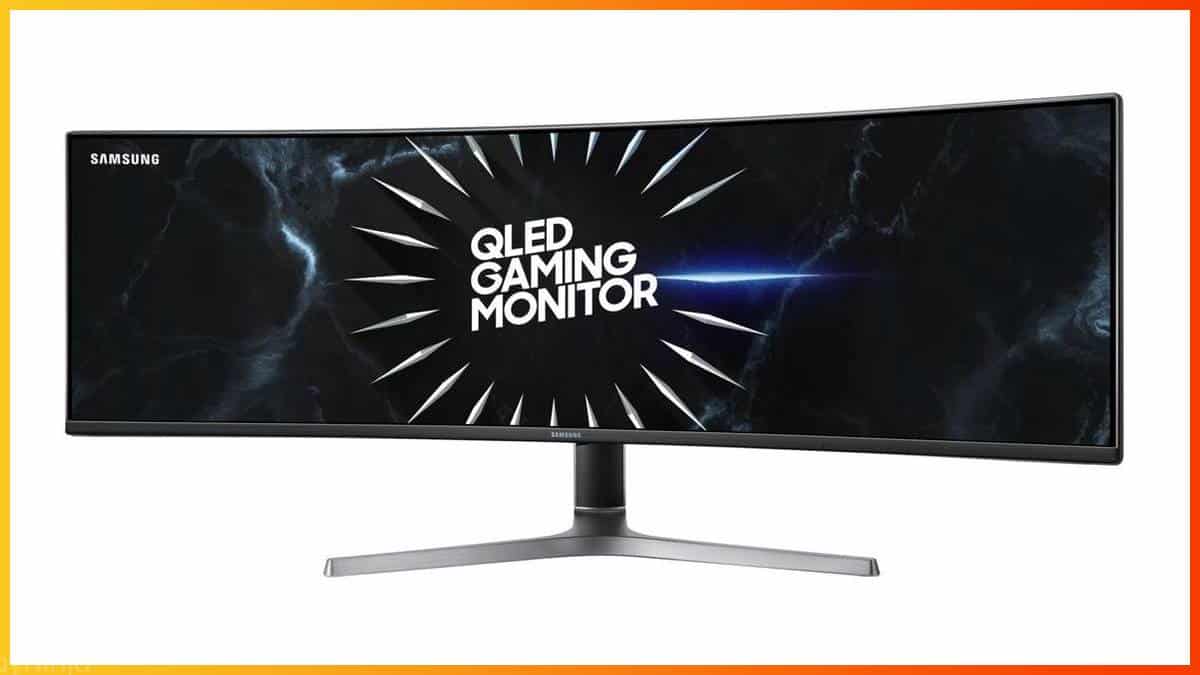 The Samsung C49RG9 (CRG9) delivers an outstanding image quality thanks to its HDR1000, quantum dots, edge-lit localized dimming, 5120×1440 resolution, and 32:9 ultrawide curved screen while the performance fluidity is ensured by AMD FreeSync up to 120Hz.

The design quality is superb, connectivity options are abundant, and there’s a ton of other useful features.

Update: There is a new 1007.2 firmware update that adds the ‘VRR Control’ option to the OSD menu, which prevents brightness flickering when using variable refresh rate.

In addition to the high resolution and wide aspect ratio, it boasts VESA’s DisplayHDR 1000 certification and QLED technology for an outstanding viewing experience.

The Samsung CRG9 is a step up from the previous Samsung CHG90 model which has a lower 3840×1080 resolution and DisplayHDR 600, but a higher 144Hz refresh rate.

You get the same rich pixel density as well, which amounts to 108 pixels per inch. With such high pixel density, you get lots of screen space as well as vivid details without any scaling.

Further, the backlight of the Samsung C49RG9 monitor features a quantum dot enhanced film (QDEF) layer, which enhances its color gamut to 95% DCI-P3 (equal to 125% sRGB) for more vibrant and lifelike colors.

The display’s brightness peaks at 1000-nits for HDR (High Dynamic Range) content while the typical luminance sits at 600-nits, which is still impressive.

Moreover, the VA panel of the monitor delivers an excellent static contrast ratio of 3,000:1, which can be further improved via local dimming.

This edge-lit display has only ten dimming zones, which dim parts of the screen that need to be darker without affecting the areas that need to remain bright like it’s the case with monitors with global dimming.

The result is deeper black shades and a better contrast ratio performance.

The overall viewing experience is stunning. However, the colors and contrast still aren’t as good as they are on the 27″ 4K 144Hz HDR displays with 384-zone FALD (full-array local dimming) such as the ASUS PG27UQ.

The Samsung C49RG9 input lag performance is top-notch with ~6ms of delay at 120Hz with the Low Input Lag option enabled. You won’t notice any delays even if you’re a hardcore gamer.

Further, the response time speed of 4ms (GtG) is sufficient to eliminate most of the trailing of fast-moving objects in video games. Some ghosting is visible, mostly in darker scenes, but it’s totally tolerable.

This also isn’t a big issue because the difference between 8-bit color and 10-bit color isn’t all that noticeable, and most games are limited to 8-bit color anyway.

Although not certified by NVIDIA as G-SYNC compatible, FreeSync works with compatible NVIDIA cards on the Samsung C49RG9 HDR gaming monitor. You can also simultaneously use FreeSync/G-SYNC and HDR.

However, some users face brightness flickering when FreeSync/G-SYNC is enabled.

This only affects some units of the monitor, and the brightness flickering is mostly present below ~48FPS and/or when your frame rate fluctuates a lot.

There is a new 1007.2 firmware update that adds the ‘VRR Control’ option to the OSD menu, which prevents brightness flickering when using variable refresh rate. However, sometimes it replaces the flickering with micro-stuttering that can be more obvious and bothersome in certain games.

Further, the monitor’s response time overdrive setting becomes locked to Standard when you enable FreeSync/G-SYNC. There are two additional overdrive modes: Faster and Fastest, which are more effective at eliminating smearing in fast-paced games.

So, if you can easily maintain high FPS, you may want to disable FreeSync and use the ‘Fastest’ overdrive option for less ghosting. In more graphically demanding games, using Standard overdrive with FreeSync will provide smoother performance.

Keep in mind that content that doesn’t support the 32:9 aspect ratio will have black borders at the sides; luckily, most modern games support it.

There’s also the Eye Saver mode, which filters out the harmful low-blue lights, which in addition to the flicker-free backlight of the Samsung C49RG9, ensures a comfortable viewing experience even after prolonged use.

The OSD (On-Screen Display) menu is compact and user-friendly, and you can easily navigate through it using the joystick, which is placed beneath the screen at the right side.

There are three additional hotkeys that you can use to access the customized picture profiles quickly.

Standard picture adjustments such as contrast, brightness, sharpness, color temperature, gamma (three profiles) are available as well. You can also turn the local dimming on/off; it will automatically turn on when HDR content is detected.

PBP (Picture by Picture) is supported as well. However, when you enable PBP, you won’t be able to use HDR, FreeSync, and local dimming, among other things.

While the Samsung CRG9 is quite big, it’s rather slim and not as heavy as it looks, thanks to its edge-lit backlight.

The newer model, the Samsung Odyssey G9, can be found for ~$1,400 with a higher 240Hz refresh rate via DSC support and a faster 1ms GtG pixel response time speed. So, we highly recommend investing in the G9 model.

If you want the ‘true’ HDR viewing experience, you will need a gaming monitor with full-array local dimming, such as the Samsung Odyssey Neo G9, though it’s significantly more expensive at ~$2,500.

All in all, the Samsung C49RG9 an enjoyable gaming experience. However, we recommend the newer G9 model as it delivers much better performance.