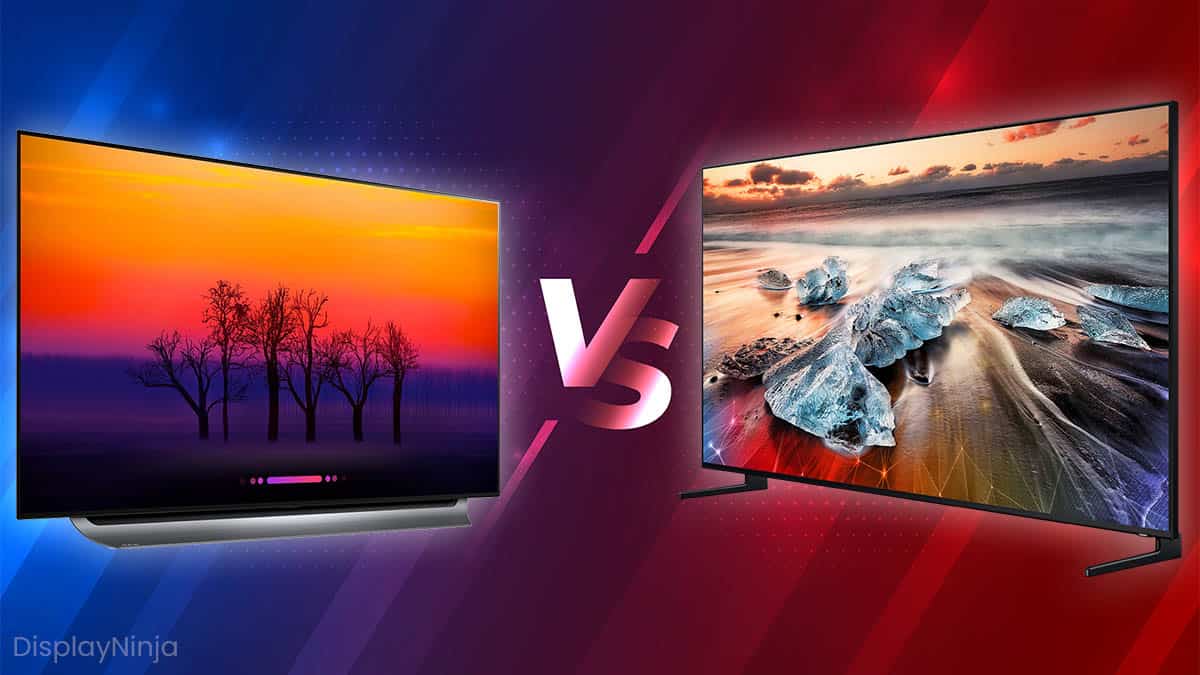 However, they cannot get as bright as QLED/LED displays and they are at risk of image burn-in/retention unless properly used.

When comparing QLED vs OLED displays, both technologies have their advantages and disadvantages.

In this article, we’ll go over everything you need to know about QLED and OLED displays (both monitors and TVs) so that you can make an informed decision about purchasing your next screen.

QLED technology introduces a film layer of quantum dots between a display’s LED backlight and its panel, which minimizes color crosstalk and light loss in order to increase that display’s color gamut and brightness.

These quantum dot nanoparticles can be applied to any LED-backlit panel type: IPS, TN, and VA; however, they are mostly utilized in Samsung’s VA-panel desktop monitors and TVs.

Samsung’s Neo QLED TVs combine the quantum dots with a mini LED backlight for an even brighter picture and better local dimming control.

Their latest QD-OLED technology applies the quantum dots to OLED panels for even better results.

LG is the main manufacturer of IPS panels and they use their own technology called ‘Nano IPS‘ to enhance the LED backlights of their displays.

This technology works by applying nanoparticles directly to the backlight of an IPS panel display; these nanoparticles absorb excessive light wavelengths, which allows for wider color gamut (98% DCI-P3/135% sRGB vs 95% DCI-P3/125% sRGB of QLED) in comparison to QLED.

However, VA panels still offer a higher static contrast ratio than IPS displays, resulting in deeper blacks (image above). This is why the two main choices when it comes to high-end TVs consist of Samsung’s VA QLED (or QD-OLED) and LG’s OLED TVs.

LG’s Nano IPS technology is more represented in desktop monitors, particularly in gaming displays such as the LG 27GL850.

Unlike QLED, OLED (Organic Light Emitting Diode) is a display technology of its own. It doesn’t use a backlight but produces its own light, meaning that it can achieve basically infinite contrast ratio and instantaneous response time (pixel transition) speed.

OLED also offers more accurate color reproduction and wider viewing angles that ensure there are no major alterations in color, contrast, or brightness when looking at the screen at an angle.

The main flaws of OLED displays include the risk of image retention/burn-in and lower peak brightness in comparison to equally-priced LED displays.

Newer OLED TVs have numerous features to prevent burn-in and image retention though – you can learn more about it here.

In the end, if you’re on the fence between QLED and OLED TVs, here’s what you should know:

QLED TVs have a higher peak brightness, which makes for eye-catching details in the highlights of the image, but OLEDs have a higher contrast ratio that ensures deeper blacks and an overall better relation between the darkest and the brightest colors.

OLED TVs also offer a faster response time speed, more accurate colors, and wider viewing angles. However, you will have to be more careful with the TV due to the image burn-in risk, although newer models have many automatic features that will help.

For more information, visit our best TV buying guide where we go into details about each popular model ranging from budget to high-end series.

As far as OLED monitors are concerned, they are still in the adaptation phase, more or less. Check out the latest development concerning OLED monitors.