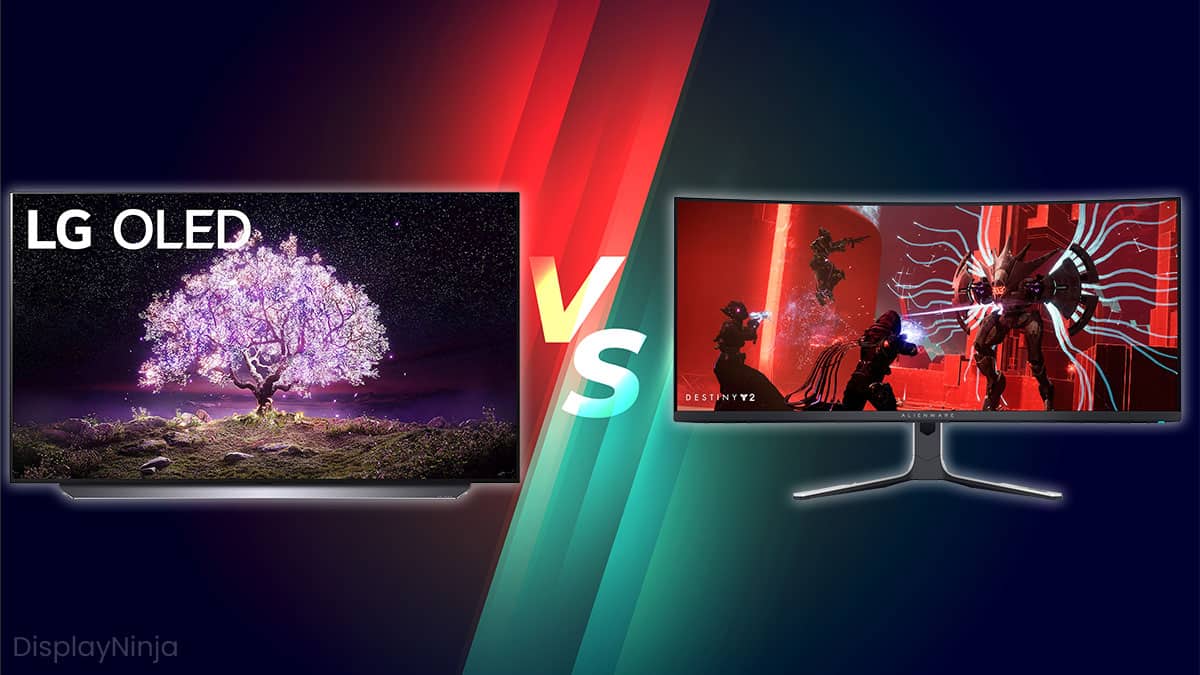 These OLED panels are also differentiated by sub-pixel layouts and coatings.

In this guide, we’ll compare how QD-OLED stacks up to other OLED panels, including W-BGR OLED panels by LG found in most TVs and monitors, and JOLED panels by JOLED, which are used for professional-use 27″ and 32″ monitors.

There are three main OLED panel manufacturers when it comes to consumer monitors and TVs – and they all have different subpixel layouts.

JOLED makes OLED panels with the regular RGB subpixel layout. This is the most common subpixel layout when it comes to LED-backlit LCDs as well, and most applications are developed with that in mind. So, you get crisp and sharp text (assuming a decent pixel density) without any fringing artifacts.

LG Display makes 42″ – 97″ OLED panels that use a WBGR subpixel layout, which consists of white, blue, green and red subpixels. These are also referred to as W-OLED sometimes.

The white subpixel is added for increased brightness and efficiency, but all four subpixels are never on at the same time.

Samsung’s QD-OLED panels have RGB subpixels but in an uncommon triangular layout.

Both QD-OLED and W-OLED panels can have visible fringing on small text due to their subpixel structure, but these visual artifacts are fairly minor and won’t bother most users; in fact, they’re unnoticeable in games and videos.

Another thing that makes all three OLED panels different is their coating.

LG’s W-OLED panels have a glossy finish with an anti-reflective coating. Under strong ambient lighting, this causes mirror-like reflections, but blacks remain black.

In contrast, Samsung QD-OLED panels have a semi-glossy screen coating with less mirror-like reflections, but because they don’t have a polarization layer, ambient lighting causes raised blacks.

JOLED RGB panels have a similar coating to that of QD-OLED.

Overall, all three OLED panels don’t handle reflections as well as most LCDs with anti-glare coating, but they also produce a more vivid image quality without any graininess.

While LG’s W-OLED panels are a bit better at mitigating indirect lighting, if you wish to take full advantage of any OLED display, it’s always best to view it in a dark room.

LG’s W-OLED panels have the weakest sustainable brightness of around 130-nits for a 100% white window, whereas JOLED RGB and QD-OLED panels can sustain around 250-nits.

For instance, let’s say you have a mostly blank Word document across the entire screen. On a W-OLED display, that would limit you to ~130-nits of brightness. If you were to place another dark window on half the screen, it would allow the screen to reach up to ~300-nits.

These jumps in brightness can be annoying, so in order to avoid them, you would need to set the display to no more than 130-nits brightness, which might be bright enough for some users, but others may find it too dim, especially for rooms with moderate ambient lighting.

JOLED and QD-OLED panels have a stronger 250-nit brightness for a 100% white window, so they can get a lot brighter without triggering ABL, which is why they’re preferred for regular desktop use.

Through the use of heatsinks and the latest Brightness Boosting technology, some LG TVs can achieve up to 30% stronger brightness, allowing their high-end models, such as the G2, to almost match Samsung’s QD-OLED displays in brightness. Here’s how the most popular OLED displays compare in HDR brightness:

However, even if LG’s G2 and Samsung’s S95B have the same measured brightness at various window sizes, the QD-OLED panel will appear notably brighter. This is because LG’s panels use white subpixels for high brightness and cannot simultaneously achieve very saturated colors.

In other words, QD-OLED panels have brighter colors (higher color volume). They also have a wider color gamut and humans perceive more saturated colors as brighter, further contributing to the overall brighter image.

JOLED panels are intended for professional use, at least the models currently available. Their RGB subpixel layout is perfect for desktop use, they focus on color accuracy and are capable of sustaining satisfactory levels of luminance for what they’re intended for.

Most people will be interested in how QD-OLED compares to W-OLED panels.

Both QD-OLED and W-OLED panels have an unconventional subpixel layout, so small text won’t be perfect when looking at it from up close. However, this won’t be an issue for most users.

In the end, you’ll most likely choose the OLED panel based on your budget and what combination of screen size, resolution and refresh rate is available. We have a dedicated OLED monitor guide where we keep track of all upcoming and available models.