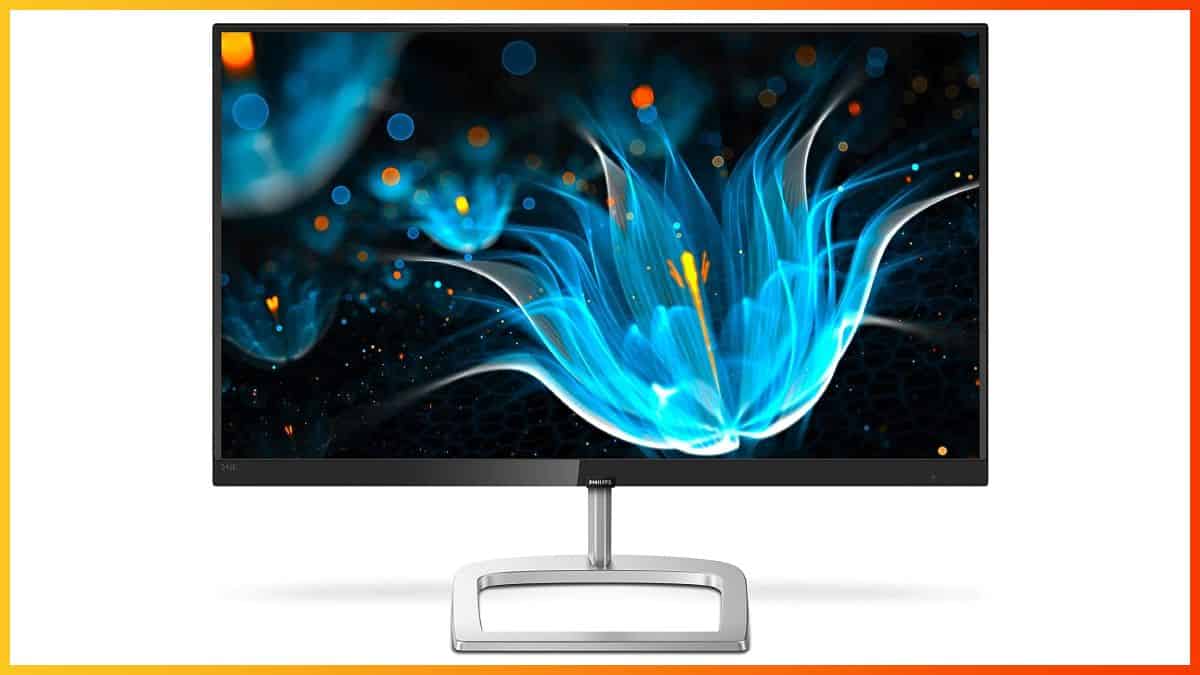 The Philips 246E9QDSB is a 24″ 1080p IPS monitor with a wide color gamut, AMD FreeSync up to 75Hz over HDMI, and a 75x75mm VESA mount compatible design. If you need all these features, it’s the perfect budget monitor for you.

The Philips 246E9QDSB is one of many 24″ 1080p IPS monitors you can get for around $100 and although it doesn’t have as an eye-catching design as some alternatives, it offers some features other monitors are missing at this price range.

Based on an IPS panel with a 250-nit peak brightness, a 1,000:1 static contrast ratio, dithered 8-bit color depth (6-bit + 2-bit FRC) and wide 178° viewing angles, the Philips 246E9QDSB delivers an excellent image quality for the price.

While the 250-nit peak brightness may seem low on paper, it will be more than enough under normal viewing conditions meaning that you’ll most likely want to reduce the brightness down from its maximum.

Since it uses an IPS panel, the colors are accurate, consistent, and vivid. Moreover, they will remain vibrant regardless of the angle you’re looking at the monitor.

The Philips 246E9QDSB monitor even has a wide 129% sRGB color gamut size. This provides you with more saturated and lifelike colors.

However, this can also make sRGB content (most of web content and games) look over-saturated. Some users prefer the over-saturated look, while others prefer a more accurate color output.

Luckily, the Philips 246E9QDSB comes with a pre-calibrated sRGB mode, which you can enable in the monitor’s OSD (On-Screen Display) settings and instantly get an accurate ~100% sRGB color representation.

Just how accurate this mode will be, however, depends on the factory calibration of the individual unit of the monitor.

Lastly, the monitor features Full HD resolution with 1920×1080 pixels, which looks great on its 23.8″ screen thanks to the decent pixel density of ~93 PPI (pixels per inch).

You get a respectable amount of screen real estate as well as sharp details and text.

In contrast, the 27″ sized version of this monitor, the Philips 276EQ9QDSB, has a notably lower PPI ratio of ~81 PPI, which results in less screen space available and more pixelated details.

The monitor’s performance is also top-notch; with only ~8ms of input lag, you won’t be able to notice any delays between your actions and the result on the screen.

Additionally, the Philips 246E9QDSB has a quick 4ms (GtG) response time, which will ensure that most pixel transitions are done within the 75Hz refresh rate window, thus eliminating trailing behind fast-moving objects.

AMD FreeSync is supported over HDMI with a 48-75 VRR (variable refresh rate) range. So, if you have a compatible graphics card by AMD, you can synchronize its FPS with the monitor’s refresh rate.

This will allow the monitor to change its refresh rate dynamically. At, 50FPS, it changes to 50Hz to eliminate screen tearing and stuttering with minimal input lag penalty (~1ms).

Unfortunately, if your FPS drops below 48, FreeSync will stop working until your FPS recovers.

Since the monitor has no DisplayPort input, you cannot use FreeSync with NVIDIA cards on this monitor, but you can use it up to 75Hz without any issues by creating a custom resolution.

One last thing to keep in mind when discussing IPS monitors is IPS glow, which is a common flaw of this technology. It’s characterized as visible ‘glowing’ around the corners of the screen due to excess light passing through the panel.

The amount of IPS glow will vary across different units of the monitor, but it’s mostly manageable as you can reduce this effect by lowering the monitor’s brightness and/or by adding some lighting, such as a lamp, next to your screen.

Our unit of the Philips 246E9QDSB had minimal IPS glow as well as no dead/stuck pixels nor excess backlight bleeding.

The OSD menu of the monitor is nothing fancy, but it gets the job done. You can easily navigate through it using the joystick placed beneath the bottom bezel of the screen.

There’s a low-blue light filter which, along with the monitor’s flicker-free backlight ensures a comfortable viewing experience at night without the risk of headaches or eye strain after prolonged use of the display.

Toggling the joystick to the left while not in the menu will open up the SmartImage feature, which consists of several pre-calibrated picture presets including FPS, Racing, RTS, LowBlue Mode, and two customizable Gamer modes.

You’ll also find the SmartResponse feature in the OSD menu, which consists of four different response time modes (Off, Fast, Faster, and Fastest). We recommend using the Fast mode.

Other features include the standard picture adjustment tools such as brightness, contrast, sharpness, input source selection, color temperature, and five gamma modes (from 1.8 to 2.6).

The design of the monitor features ultra-thin bezels at the top and at the sides, which make it a great choice for multi-monitor setups. You can tilt the screen by -5°/20° or mount it via the 75x75mm VESA pattern.

However, as you can see in the picture above, the bottom two VESA holes are very close to the monitor’s ports meaning that if you use the standard VESA plate with both 75x75mm and 100x100mm patterns, it will block the inputs.

So, you will need a 75x75mm-only VESA plate or to cut the excess bottom material from a 100x100mm plate.

This is forgivable given that most monitors at this price range don’t feature VESA mounting holes at all.

Connectivity options are abundant and include DVI-D, VGA, HDMI 1.4, and a headphone jack.

While the chassis of the screen has a glossy finish, the screen has a low-haze (25%) anti-glare coating, which eliminates reflections, but doesn’t make the picture seem grainy as more aggressive coatings tend to do.

Note that there are two similarly named but different Philips 246E9Q monitors:

Now, as we’ve mentioned earlier, a lot of budget monitors are currently overpriced. Therefore, we recommend checking out the following budget models and getting one that’s closest to a realistic $150 price for a 24″ 1080p IPS monitor: