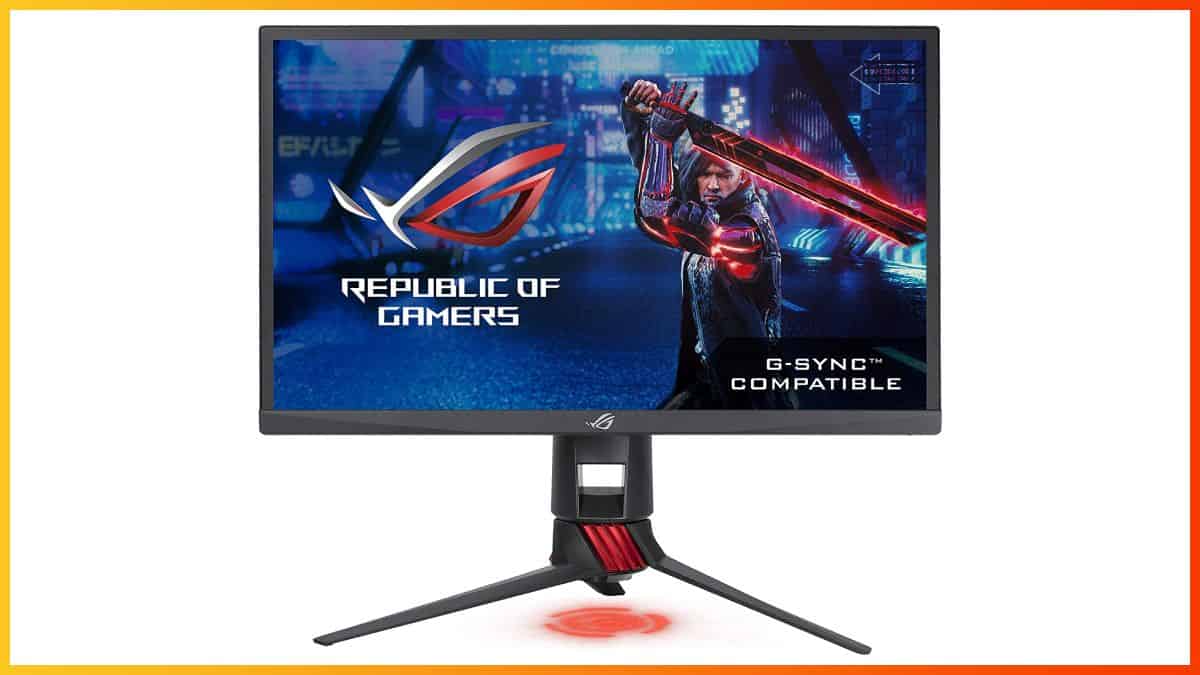 The ASUS XG248Q provides everything a hardcore competitive gamer needs. You get both FreeSync and certified ‘G-SYNC Compatible’ support, motion blur reduction up to 240Hz, low input lag, and quick response time – which guarantees you’ll be able to find the perfect settings for your gameplay style.

What makes this 240Hz model stand out from the rest of similar monitors is that it supports FreeSync, it’s G-SYNC compatible, and offers backlight strobing up to 240Hz – all that for a very appealing price.

Unlike the more popular 24.5″ 1080p 240Hz models, the ASUS XG248Q uses a 23.8″ panel by Innolux which offers slightly sharper and clearer details thanks to its higher pixel density (pixel-per-inch ratio).

Although it features the same specs, including dithered 8-bit color depth (6-bit + FRC), 400-nit peak luminance, and 1,000:1 contrast ratio, the color and contrast performance is a bit weaker on the ASUS ROG Strix XG248Q display.

The difference, however, is negligible after considering the superior performance the XG248Q offers in comparison to most of the 24.5″ variants.

Now, the backlight strobing frequency of most 240Hz monitors maxes out at 144Hz, whereas the XG248Q goes all the way to 240Hz.

Note that you can also enable ELMB at 120Hz, 144Hz, and 200Hz in addition to 240Hz. Set it to the refresh rate that’s closest to your in-game frame rate for minimal strobe crosstalk.

In addition to having six levels of response time overdrive (from 0 to 5) as well as both FreeSync and G-SYNC support, you will be able to tweak the perfect settings to match your preferred gaming experience/gameplay style with this gaming monitor.

Additionally, the monitor offers AuraSync, which consists of customizable RGB LEDs that you can synchronize with the rest of AuraSync-compatible hardware as well as with on-screen content in compatible games.

The monitor is flicker-free, has a low blue light filter, and features a user-friendly OSD (On-Screen Display) menu that can be easily navigated via its 5-way joystick. You will also find three gamma presets (1.8, 2.2, and 2.5) and other standard adjustments.

Lastly, you get ASUS’ DisplayWidget software, where you can get customizable all your settings and presets in a desktop application.

Beneath the base of the monitor, there’s the ROG logo light projector, which comes with two different logo covers and one that’s customizable.

FreeSync works over both HDMI and DisplayPort with a 40-240Hz variable refresh rate range whereas G-SYNC (requires at least 417.71 WHQL drivers and GTX 10-series or newer NVIDIA GPU) works over DisplayPort only, with the same range.

The ASUS ROG Strix XG248Q price is around $300, which is a bit steep considering that is uses a TN panel.

Nowadays, you can find a 1080p 240Hz IPS gaming monitor that’s just as fast, but offers better colors and wider viewing angles for the same price, such as:

You may also want to check out our best monitors for FPS games buyer’s guide.

While the ASUS XG248Q was an appealing 240Hz monitor when it was released, there are better models available nowadays at the same price range.