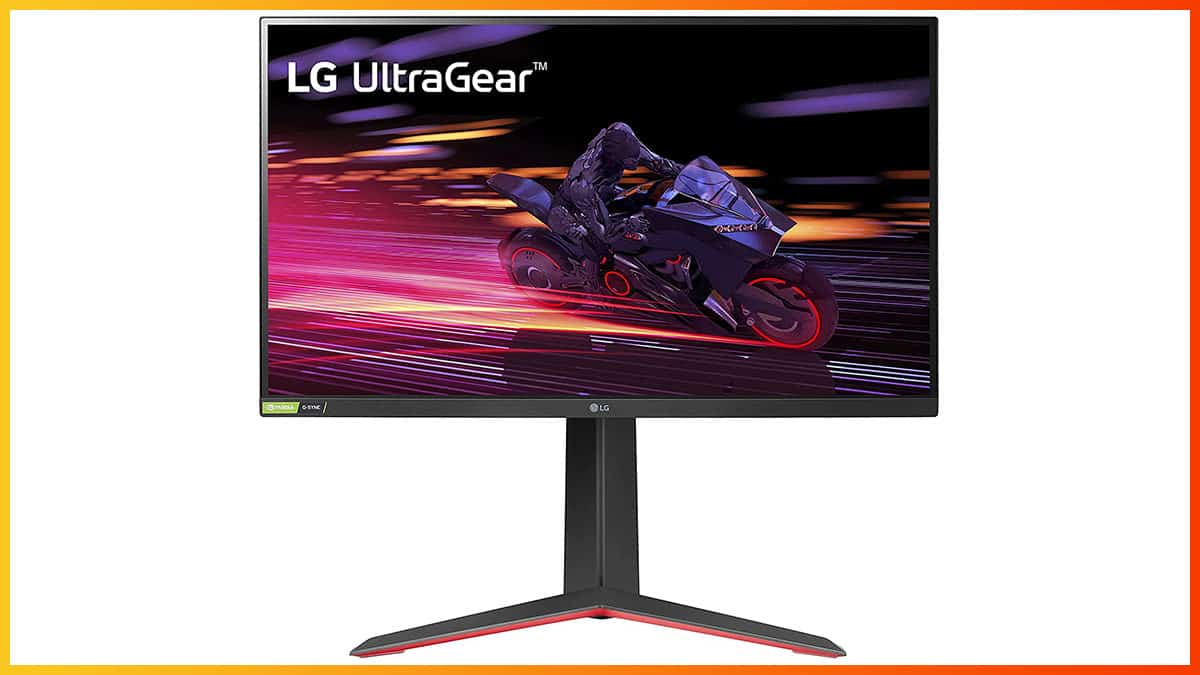 The LG 27GP750 is an excellent 240Hz budget gaming monitor as long as you don’t mind the low pixel density.

The LG 27GP750-B is one of the cheapest 240Hz gaming monitors available, so let’s see how it stacks up against pricier alternatives.

Based on an IPS panel, the LG 27GP750 monitor provides you with 178° wide viewing angles, ensuring that the picture will remain consistent in terms of color, brightness, contrast and gamma regardless of the angle you’re looking at it.

You also get a strong peak brightness of 400-nits, so the screen will be able to get more than bright enough even in well-lit rooms.

The contrast ratio amounts to 1,000:1, so you won’t get quite as deep blacks as that of VA panels with ~3,000:1 contrast ratio, however, VA technology has its own flaws at this price range.

Keep in mind that all IPS monitors suffer from IPS glow, characterized as visible glowing around the corners of the screen at certain viewing angles. It’s mostly noticeable when displaying dark content in a dark room with high brightness settings, so there are ways to mitigate it.

For watching videos, this isn’t as big of an issue since at a certain viewing distance (3½ ft or ~107cm) individual pixels become indistinguishable. In games, you can use anti-aliasing to mask the visual artifacts caused by low resolution (such as the stair-case effect).

However, if you plan on using the monitor for work that involves a lot of reading, typing and multi-tasking, you should consider a higher resolution display.

Most competitive players also prefer smaller screens for first-person shooters as you don’t have to move your neck and eyes as much to see everything that’s happening on the screen.

On the other hand, there are gamers who don’t mind the 27″ sized displays and actually prefer the low pixel density as the image with bigger pixels helps with their aiming precision.

The LG 27GP750 has four response time overdrive modes: Off, Normal, Fast and Faster. The ‘Faster’ mode has too much overshoot, so it should be avoided.

We recommend going with the ‘Fast’ mode for gaming at high refresh rates.

At low refresh rates (~60Hz), you should dial back the overdrive to ‘Off’ in order to prevent inverse ghosting.

Input lag is low at just below 3ms, so you won’t be able to notice or feel any delays whatsoever.

G-SYNC Compatible works with NVIDIA cards over DisplayPort, whereas FreeSync is supported over both DisplayPort and HDMI with the same 48-240Hz VRR range.

VRR dynamically changes the monitor’s refresh rate to match GPU’s frame rate in order to prevent tearing and stuttering at virtually no input lag penalty (~1ms) within the 48-240Hz/FPS range. Below 48FPS, LFC (Low Framerate Compensation) kicks in and multiplies the frames to avoid screen tearing.

While 240Hz provides smoother gameplay than ~144Hz, the jump is not as noticeable as it is going from 60Hz to over 120Hz. However, if you’re mostly playing competitive FPS games and can maintain such a high frame rate (~240FPS), 240Hz is definitely worth it.

The LG 27GP750 offers plenty of useful features, which can be accessed in the OSD (On-Screen Display) menu via the navigational joystick beneath the bottom bezel of the screen. Alternatively, you can use LG’s On-Screen Control desktop application.

Auto Input Switch is supported as well, so the monitor can automatically switch to the detected input source.

The backlight of the monitor is flicker-free and there’s an integrated low-blue light filter (the Reader picture mode).

Lastly, the LG 27GP750 supports HDR10, however, while it can accept the HDR10 signal, it lacks the hardware for a proper HDR viewing experience, so you should leave it disabled as it will just over-brighten or dim the image.

The stand of the monitor is sturdy and offers a good range of ergonomics, including up to 110mm height adjustment, -5°/15° tilt, 90° clockwise pivot and 100x100mm VESA mount compatibility; swivel to the left/right is not supported.

The screen has a light matte anti-glare coating that prevents reflections without making the image too grainy.

Connectivity options include DisplayPort 1.4, two HDMI 2.0 ports, a headphone jack and a USB port for service and firmware updates.

If you want the best 240Hz gaming monitor, we recommend the ViewSonic XG2431 with Blur Busters approved backlight strobing implementation.

Overall, if you can find it at the discounted $230 price, the LG 27GP750 offers amazing value for the money for competitive gaming.