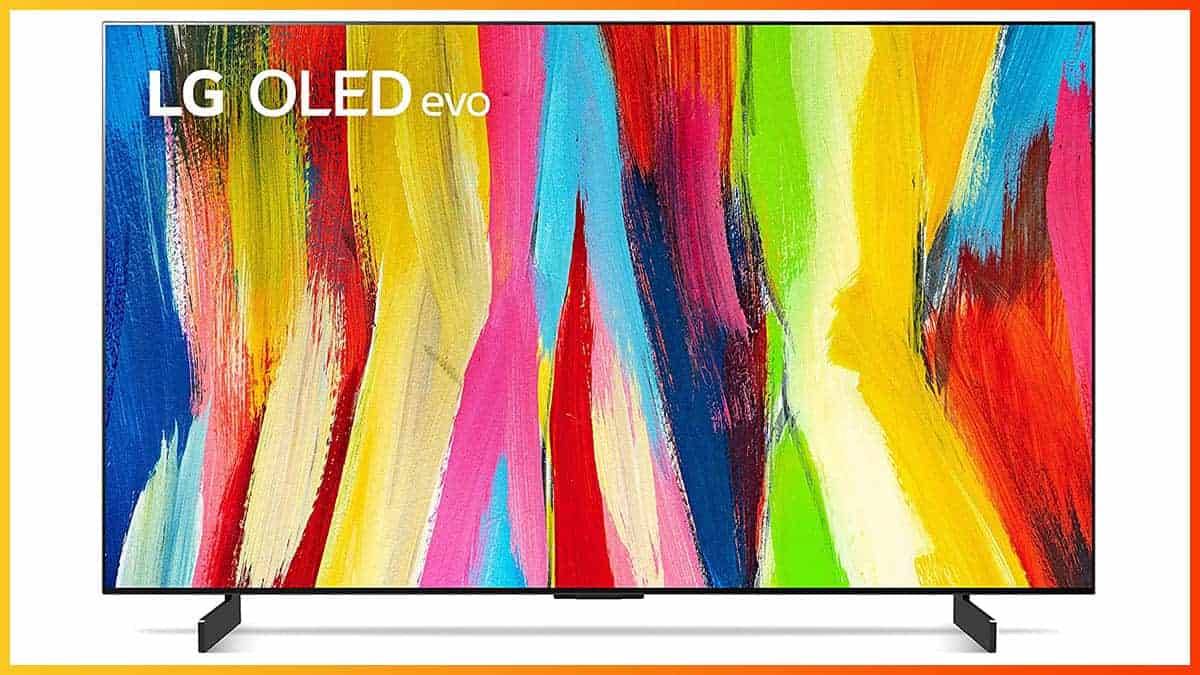 As expected from an LG OLED display, you get an incredible HDR image quality and buttery smooth gaming performance. The 42″ sized screen certainly feels better as a desktop monitor than 48″, but a lot of users will still find it too big. We were disappointed that LG removed 120Hz BFI support, which some gamers might find deal-breaking. There are also a few alternatives and upcoming displays to keep in mind.

OLED technology is finally making its way onto the monitor market and LG’s C2 series is the first to include a 42″ sized TV that many users will find comfortable using as a desktop monitor. Here’s what you need to know about the LG OLED42C2, including how it compares to its alternatives.

The main advantage of OLED panels is that they don’t rely on a backlight to produce the image; instead, each individual pixel is self-emissive, resulting in true blacks and an infinite contrast ratio. There’s also no backlight bleeding, haloing, glowing, or similar visual artifacts.

Further, the LG OLED42C2 provides you with vibrant and lifelike colors thanks to its wide 98% DCI-P3 color gamut and precise factory calibration out of the box. An sRGB emulation mode is also available for better accuracy when watching SDR content.

The display supports true 10-bit color depth for 1.07 billion colors with smooth gradients, while the 178° wide viewing angles ensure that the picture remains perfect regardless of the angle you’re looking at the screen.

Next, the 4K UHD resolution looks crisp and sharp even on the 41.5″ viewable screen of the OLED42C2 TV with a pixel density of 106 PPI (pixels per inch), which is comparable to that of 27″ 2560×1440 displays (108 PPI). So, you get plenty of screen real estate and crystal-clear details and text without any scaling necessary.

Keep in mind that 4K UHD is quite demanding on the CPU/GPU, so make sure your hardware will be able to handle your favorite games at decent frame rates.

One of the drawbacks of OLED technology is brightness. The LG OLED42C2 cannot get as bright as similarly priced LED-backlit displays. It has a peak brightness of 700-nits for a 10% white window, so you still get an immersive HDR viewing experience with vivid highlights.

Related:Is An HDR Gaming Monitor Worth It?

With a 100% white window, the brightness is limited to around 180-nits. A lot of users will still find the screen to be bright enough under normal lighting conditions, but if you’re in a particularly bright room without any means to block the light, it might be too dim for you, especially after considering the display’s glossy coating that makes the picture more vivid at a cost of being reflective.

Another thing to keep in mind is ABL (Automatic Brightness Limiter); it limits the screen’s brightness in order to preserve the panel but can cause noticeable jumps in brightness.

For instance, if you have an empty Word document across the entire screen, the brightness is limited to 180-nits. However, if you change the document size to around 50%, the brightness can go up to 230-nits.

This change in brightness can be annoying if you’re constantly changing the sizes of bright elements on the screen, but you can prevent it by enabling ‘Game Optimizer’, which will limit the brightness to ~180-nits.

LG’s OLED displays use a WRGB subpixel layout instead of the more common RGB layout you find on most LED LCDs, but text is quite sharp and clear without any fringing.

As it’s the case with all OLED displays, there’s always the risk of permanent image burn-in and temporary image retention that occurs if static elements remain on the screen for too long.

However, as long as you’re careful, it won’t be an issue; don’t leave the image with bright static elements on for too long, play varied content and use LG’s integrated burn-in prevention features, such as pixel refresher, screen shift, etc.

Yet another big advantage of OLED technology is the instantaneous pixel response time speed that ensures there are no trailing or overshooting artifacts behind fast-moving objects, making the LG OLED42C2 ideal for fast-paced games.

Input lag performance is impressive as well with around 5ms of delay, which is imperceptible.

Some gamma shifts can be observed with VRR enabled as near-black shades get brightened up in some scenes. LG’s ‘Fine Tune Dark Areas’ feature is meant to alleviate this issue a bit, but it comes at a cost of image quality/accuracy since lowering the setting affects shadow details, while increasing it elevates blacks.

Regardless, this issue is only noticeable in certain scenes of some games, so it’s manageable.

The LG OLED42C2 TV also supports Motion Blur Reduction or BFI (Black Frame Insertion) which reduces perceived motion blur at a cost of picture brightness. You can turn it on by enabling the OLED Motion Pro feature under TruMotion settings.

Sadly, unlike the previous-gen C1 and CX models, the C2 does not support BFI at 120Hz, only at 60Hz.

While the TV doesn’t use PWM (Pulse Width Modulation) to regulate brightness, there are slight fluctuations in brightness every 8.33ms, but they’re not noticeable in real use and won’t bother those sensitive to flickering.

The LG OLED42C2 uses WebOS 22 and has the Alpha 9 Gen 5 processor for smooth navigation through its smart features. You also get the LG Magic Remote controller.

There are various picture presets in the OSD menu, such as Game, Cinema, Filmmaker Mode (for the most accurate representation of the creator’s intent), Expert (Bright Room, Dark Room), etc.

The C2 series also includes the 21:9 and 32:9 Wide Aspect Ratio feature in the OSD (On-Screen Display) menu, allowing you to place black borders at the top and bottom of the screen and extend the image horizontally for a wider field of view in compatible games – without having to fiddle with custom resolutions.

The stand of the monitor is quite slim and unlike the previous series has two legs to better fit on a regular desk. It has no ergonomic adjustments, but there’s a 200x300mm VESA mounting pattern.

The screen has a glossy screen finish, which makes the image pop more, but it also makes it reflective. It won’t be an issue as long as there’s no strong lighting directly hitting the screen though.

ASUS offers a monitor based on the same panel, the PG42UQ. It uses a heatsink for a bit higher brightness and it’s overclockable to 138Hz. Further, it has a matte anti-glare coating instead of a glossy finish like the 42C2, so it’s better at handling reflections, but the image isn’t quite as vivid in a dark room.

You should also consider the Dell AW3423DW with a QD-OLED panel that offers higher brightness, a wider color gamut, a 3-year warranty that covers burn-in and a higher 175Hz refresh rate with a dedicated G-SYNC module for $1,300.

It also has some issues, such as an anti-reflective coating that makes blacks appear gray under direct lighting, an audible cooling fan and a peculiar triangular RGB subpixel layout that affects small text.

In our AW3423DW review, we go into more details about how it compares to LG’s OLEDs, so make sure to check it out.

Overall, the LG OLED42C2 delivers as expected. You get an amazing image quality and buttery-smooth performance in a previously-unavailable 42″ form factor that many gamers have been waiting for. We just wish LG didn’t remove 120Hz BFI.

For a lot of gamers, however, 42″ is still too big, in which case we recommend checking out the Dell AW3423DW, as well as the upcoming mini LED displays. LG and AUO are also working on 32″ high refresh rate OLED panels, but there’s no word on any progress or availability yet.