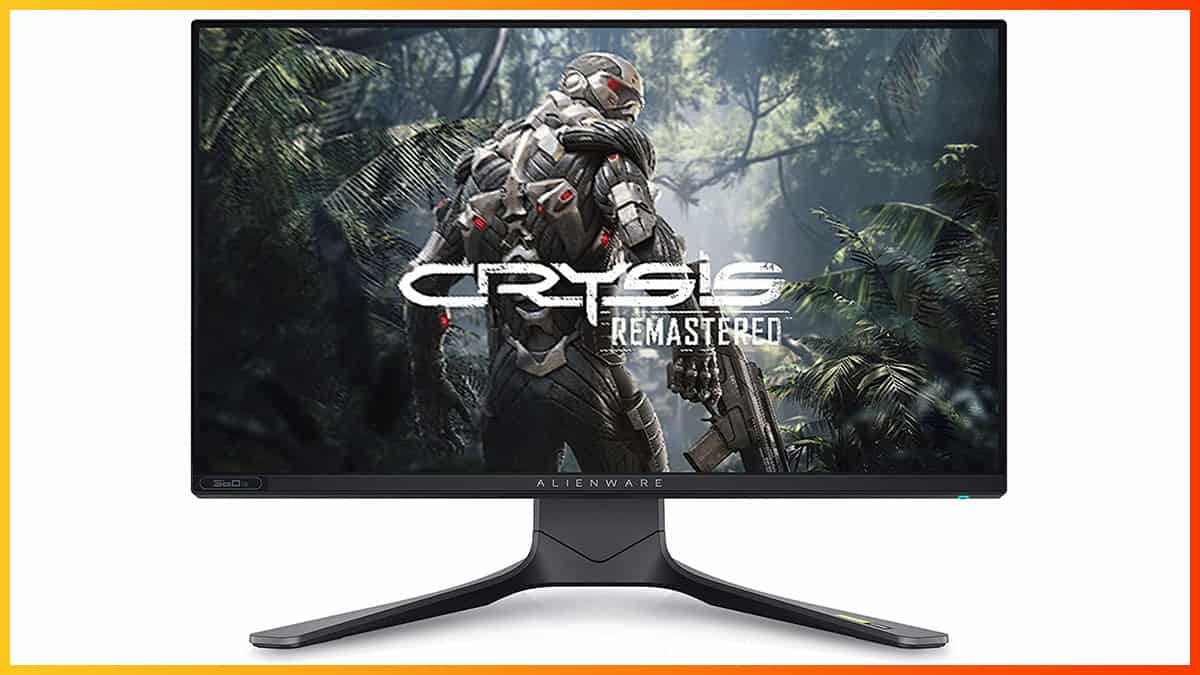 If you are a professional gamer or aim to become one, the Dell Alienware AW2521H is for you. It offers low input lag, quick response time, and plenty of features including G-SYNC and ULMB. Moreover, it’s based on an IPS panel with vibrant colors and wide viewing angles.

The Dell Alienware AW2521H is a rapid 360Hz gaming monitor aimed at high-end competitive gamers who don’t wish to compromise on performance.

Based on an IPS panel with a quick 1ms GtG response time speed, the Alienware AW2521H delivers a ghosting-free fast-paced gaming experience, as well as vibrant and accurate colors with wide viewing angles.

In fact, the monitor is factory-calibrated at Delta E ≤ 1.5, so you’ll get precise and consistent colors right out of the box with ~99% sRGB gamut coverage, while the wide 178° viewing angles ensure flawless image quality regardless of the angle you’re looking at the screen.

Of course, such image quality can be found on significantly cheaper monitors too, but the fact that it’s paired with a high 360Hz refresh rate will delight a lot of gamers as they won’t have to settle for TN panels with inferior image quality, narrow viewing angles, and prominent gamma shifts.

Further, the Dell AW2521H has a strong 400-nit peak brightness, meaning that it can get more than bright enough, even in well-lit rooms.

The static contrast ratio amounts to ~1,200:1, which is a bit above the specified 1,000:1, though still standard for IPS panel monitors; it results in somewhat grayish blacks in comparison to VA panels with ~3,000:1 contrast ratio, but VA panels have other disadvantages.

The monitor can also accept the HDR10 signal (High Dynamic Range), but it lacks proper display capabilities for a noteworthy HDR viewing experience, such as wide color gamut, even higher brightness, and local dimming.

HDR is obviously not the monitor’s selling-point, so you can simply ignore it.

You get fairly sharp details and a decent amount of screen space, but more importantly, 1080p is not very demanding on your PC, allowing you to easily maintain ~360FPS in competitive titles in order to take full advantage of the monitor’s refresh rate.

Some IPS glow and backlight bleeding is visible, as expected from this panel technology, but the amount of it will vary across different units of the monitor.

Thanks to its high 360Hz refresh rate, the Dell Alienware AW2521H monitor delivers an incredibly low input lag of just below 2ms, which is impereceptible.

Now, while the jump to 360Hz from 240Hz is noticeable, it’s not as apparent as it is going to 240Hz from 144Hz, but you can definitely feel the difference.

In competitive gaming, every millisecond counts, so if you’re a serious/professional gamer, you’ll definitely want this piece of gaming machinery.

Both Super Fast and Extreme modes are redundant as they introduce too much inverse ghosting (pixel overshoot), whereas the Fast mode works perfectly fine across the entire refresh rate range. It prevents ghosting at no cost of overshoot.

However, due to the way sample-and-hold display technology works (LED and OLED, but not CRT and Plasma), some motion blur will still be noticeable.

It can only be activated at a fixed 144Hz or 240Hz refresh rate, and not at the same time as NVIDIA G-SYNC.

ULMB also decreases the monitor’s brightness while active, but you can adjust the trade-off between brightness and motion clarity via the ULMB Pulse Width option in the OSD (On-Screen Display) menu of the monitor.

You can adjust Pulse Width from 10 to 100. The higher the setting, the higher the brightness and motion blur will be, and vice versa.

Alternatively, you can use G-SYNC in order to completely prevent screen tearing up to 360FPS. While the newer monitors with G-SYNC modules, which includes the Dell Alienware AW2521H, should also allow variable refresh rate (VRR) to be used with Radeon graphics cards, note that AMD FreeSync is not supported on this monitor for some reason.

This feature allows you to connect a compatible mouse to the front USB port (one with a little mouse icon) of the monitor and measure input latency.

Note that this only measures input latency, it does not reduce it.

This technology should also not be confused with NVIDIA Reflex, which does reduce input lag in supported games once enabled regardless of the monitor or mouse you are using, as long as you have a compatible graphics card (GTX 900-series or newer).

Moving on, the monitor has a directional joystick for OSD menu navigation, as well as four additional hotkeys for shortcuts.

Noteworthy gaming features include Dark Stabilizer (improves visibility in darker games by altering the gamma curvature) and Game Enhance Mode (consists of an on-screen timer and a frame rate counter).

Note that the backlight of the Dell Alienware AW2521H display is flicker-free (unless ULMB is enabled), so it won’t cause headaches/eye strain to those sensitive to flickering.

There’s also an integrated ambient light sensor, which can adjust the screen brightness according to ambient lighting.

Finally, there are RGB LEDs at the rear of the monitor, which you can customize in the OSD menu or via the downloadable AlienFX application.

Some advanced image adjustment tools are missing, including gamma, 6-axis hue/saturation, and sharpness. This is sadly common for Alienware displays.

You can also detach the stand and mount the screen via the 100x100mm VESA pattern. Further, the screen has a matte anti-glare coating that prevents reflections without making the image too grainy.

Note that the monitor can also support 10-bit color depth, in which case you’re limited to 300Hz over DisplayPort 1.4 without chroma subsampling.

Since most games only support 8-bit color (especially when it comes to eSports titles), it’s not really an issue.

If you’re a professional gamer, they’re worth the price, but we think that most competitive gamers will be satisfied with a ~$250 240Hz model, such as the Dell S2522HG.

We also recommend checking out the Acer XV252QF. It’s a 360Hz monitor with FreeSync, 390Hz overclockable refresh rate, and its MBR implementation works all the way up to its maximum refresh rate. However, it’s hard to find one in stock.

In case you’re looking for a monitor with good backlight strobing, be sure to check out the ViewSonic XG2431 240Hz model.

The Dell Alienware AW2521H is an amazing monitor for fast-paced gaming. It is expensive, but if you’re a professional gamer or aim to become one and you want a display with a dedicated G-SYNC module, it’s worth it.